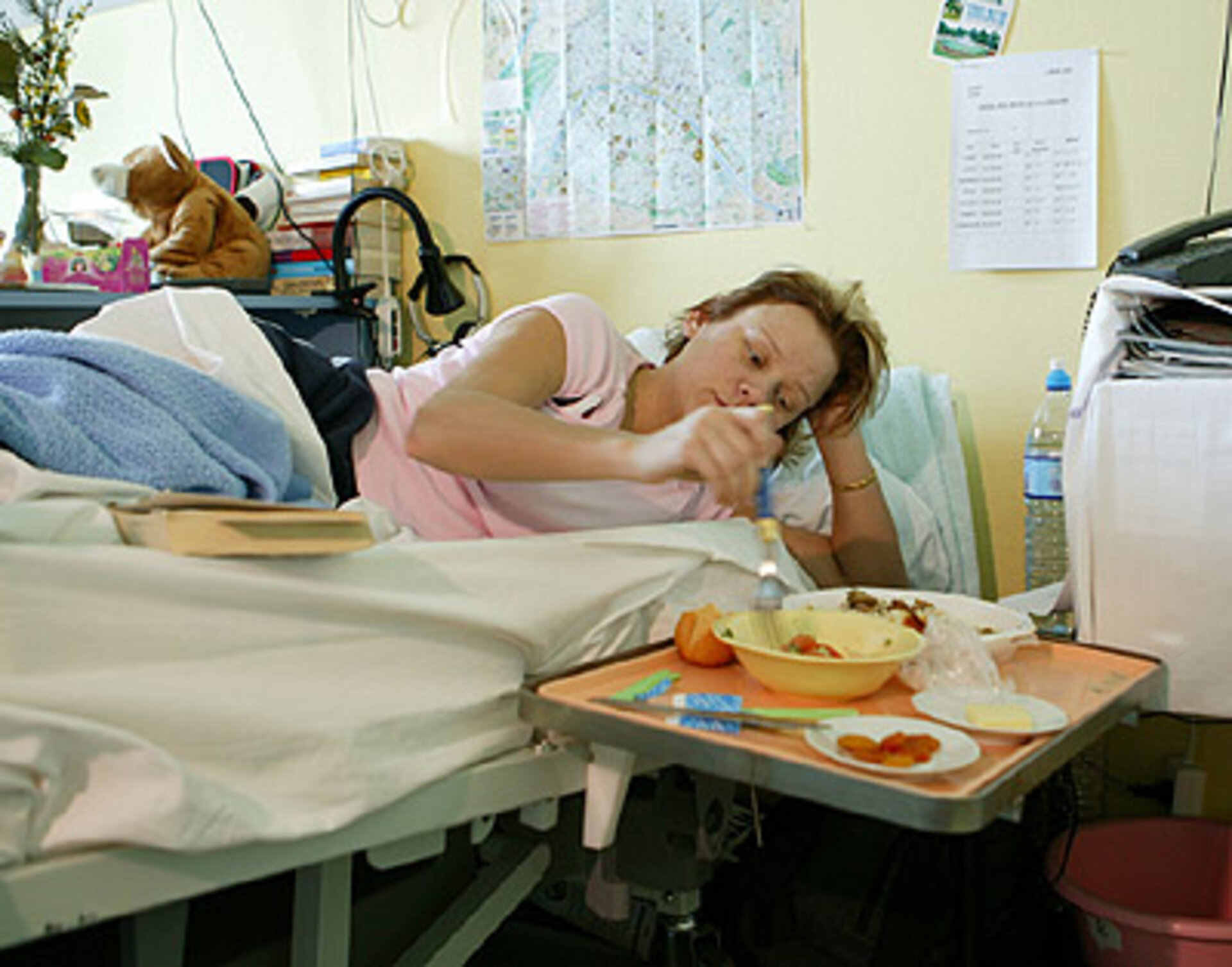 ESA PR 43-2005. As of 1 October, the second 2005 campaign of the Women's International Space Simulation for Exploration (WISE) study has been fully under way. All 12 female participants are now lying in bed tilted head down at an angle of 6º below horizontal, so that their heads are slightly lower than their feet.

The participants will undertake all activities in this position for 60 days. Remaining in this head-down, tilted position results in physiological changes that also occur in astronauts during spaceflight. The study will assess the roles of nutrition and combined physical exercise in countering the adverse effects of extended gravitational unloading through bed rest.

The participants in this second campaign started moving in pairs into the study location, the MEDES Space Clinic at the Rangueil Hospital in Toulouse, France, on 6 September. Prior to the start of the 60 days of bed-rest, there was a 20-day period during which physiological data were collected for use for comparative purposes throughout the study. The first participants to arrive were thus in bed in the head-down, tilted position by 26 September.

The second campaign attracted responses from women across Europe. From among these candidates, a planned dozen were chosen to take part in the study. Seven of these come from France, three come from Finland, one from Switzerland and one from the United Kingdom. The test subjects have been divided into three groups of four. One group will be the so-called control group, receiving no extra stimulus over the course of the bed-rest period. The second group will undertake an exercise programme whilst in bed. The third will receive a nutritional supplement throughout the 60 days.

“I am glad to see the second campaign under way,” said Peter Jost, ESA’s project manager for the WISE study. “Although it is too early to draw firm conclusions, initial findings from the first campaign do indicate that the countermeasures tested had beneficial effects for the health of the volunteers. The combined exercise regime seemed to maintain the capacity to carry out a certain degree of endurance exercise (aerobic exercise capacity) and helped at the end of the bed-rest period to preserve orthostatic tolerance, i.e. the ability to change posture to an upright stance without feeling faint.

Both countermeasures appeared to diminish insulin resistance. And a surprising result was that the nutritional countermeasure seemed to have protective effects for the cardiovascular system. However, we need the results of this second campaign before we can make valid statements, also for the other research objectives of the 12 different experiment protocols. These conclusions must be based on statistical significance and will be published in scientific journals.”

During the 20-day rehabilitation period following bed-rest, the test subjects will undergo tests similar to those before the bed-rest period, for comparison with the baseline data. The data collected by WISE will be used to draw conclusions about such aspects as muscle condition, blood parameters, cardiovascular condition, coordination of movements, changes in immune system, bone formation and psychological wellbeing.

Results expected from the WISE study will prove valuable in planning long-duration human missions. This research will also have clinical significance on Earth, advancing knowledge and pointing to improved methods of assisting recovery by bedridden patients. Studying the early effects of reduced activity on a molecular level is also expected to provide further evidence of the benefits of regular exercise in the prevention of conditions like type 2 diabetes and high blood pressure.

The WISE study is a joint scientific venture between the European Space Agency (ESA), the French Space Agency (CNES), the National Aeronautics and Space Administration (NASA) and the Canadian Space Agency (CSA). The experiment protocols have been put together by a group of international scientists.

MEDES, the French Institute for Space Medicine and Physiology, organised the selection of the volunteers and provided medical, paramedical and technical staff to support these experiments.

For additional information ESA has created a website on the WISE study at: http://www.spaceflight.esa.int/wise