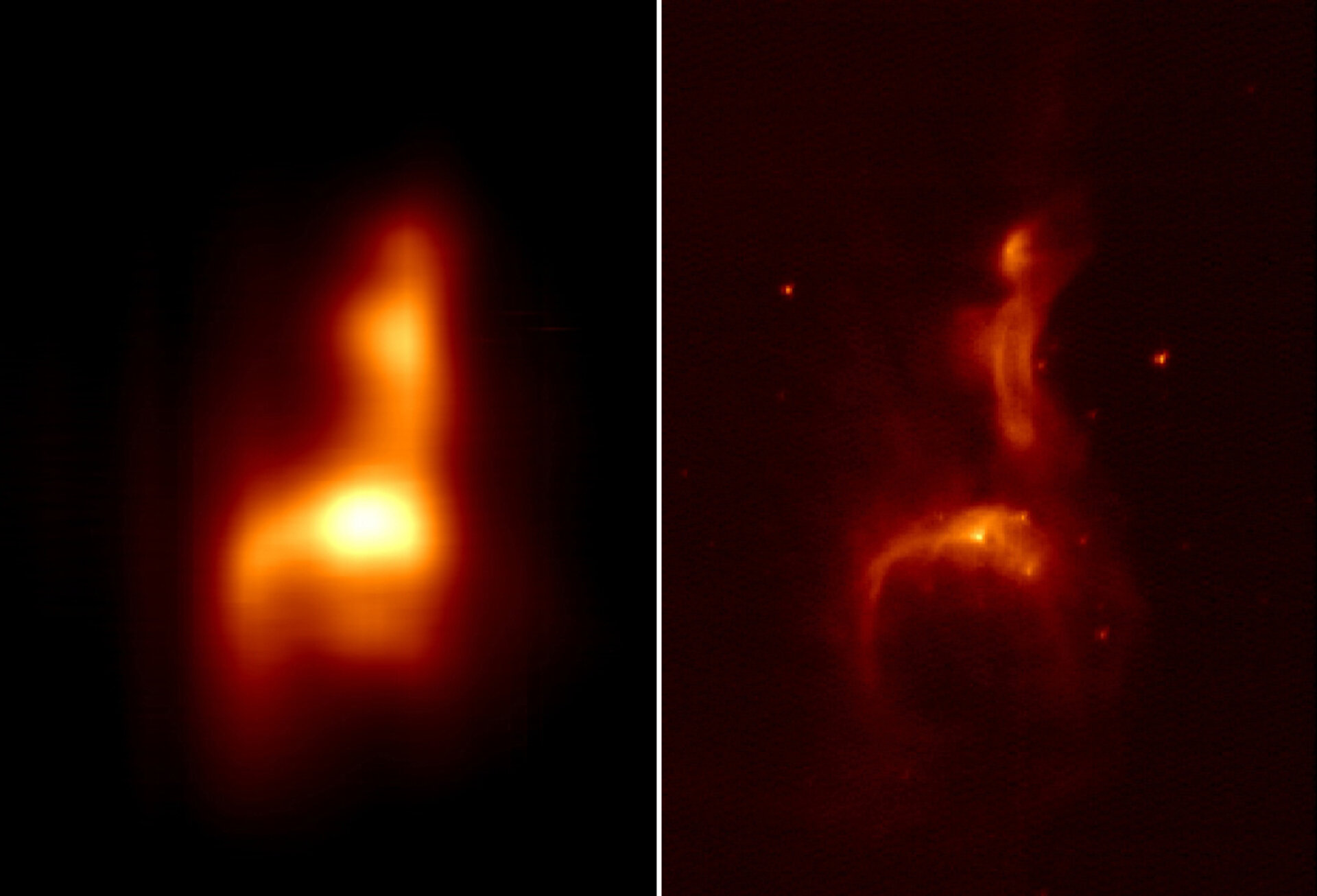 AKARI, the new Japanese infrared sky surveyor mission in which ESA is participating, saw ‘first light’ on 13 April 2006 (UT) and delivered its first images of the cosmos. The images were taken towards the end of a successful checkout of the spacecraft in orbit.

The mission, formerly known as ASTRO-F, was launched on 21 February 2006 (UT) from the Uchinoura Space Centre in Japan. Two weeks after launch the satellite reached its final destination in space – a polar orbit around Earth located at an altitude of approximately 700 kilometres.

On 13 April, during the second month of the system checkout and verification of the overall satellite performance, the AKARI telescope’s aperture lid was opened and the on-board two instruments commenced their operation. These instruments - the Far Infrared Surveyor (FIS) and the near-mid-infrared camera (IRC) - make possible an all-sky survey in six infrared wavebands. The first beautiful images from the mission have confirmed the excellent performance of the scientific equipment beyond any doubt.

AKARI’s two instruments were pointed toward the reflection nebula IC4954, a region situated about 6000 light years away, and extending more than 10 light years across space. Reflection nebulae are clouds of dust which reflect the light of nearby stars. In these infrared images of IC4954 ­ a region of intense star formation active for several million years – it is possible to pick out individual stars that have only recently been born. They are embedded in gas and dust and could not be seen in visible light. It is also possible to see the gas clouds from which these stars were actually created.

"These beautiful views already show how, thanks to the better sensitivity and improved spatial resolution of AKARI, we will be able to discover and study fainter sources and more distant objects which escaped detection by the previous infrared sky-surveyor, IRAS, twenty years ago," says Pedro García-Lario, responsible for ‘pointing reconstruction’ - a vital part of the AKARI data processing - at ESA’s European Space Astronomy Centre (ESAC), Spain. "With the help of the new infrared maps of the whole sky provided by AKARI we will be able to resolve for the first time heavily obscured sources in crowded stellar fields like the centre of our Galaxy," he continued.

With its near-mid-infrared camera, AKARI also imaged the galaxy M81 at six different wavelengths. M81 is a spiral galaxy located about 12 million light years away. The images taken at 3 and 4 microns show the distribution of stars in the inner part of the galaxy, without any obscuration from the intervening dust clouds. At 7 and 11 microns the images show the radiation from organic materials (carbon-bearing molecules) in the interstellar gas of the galaxy. The distribution of the dust heated by young hot stars is shown in the images at 15 and 24 microns, showing that the star forming regions sit along the spiral arms of the galaxy.

"It’s a feeling of tremendous accomplishment for all of us involved in the AKARI project to finally see the fruits of the long years of labour in these amazing new infrared images of our Universe,” said Chris Pearson, ESA astronomer located at ISAS and involved with AKARI since 1997, “We are now eagerly waiting for the next ‘infrared revelation’ about the origin and evolution of stars, galaxies and planetary systems."

Having concluded all in-orbit checks, AKARI is now entering the first mission phase. This will last about six months and is aimed at performing a complete survey of the entire infrared sky. This part of the mission will then be followed by a phase during which thousands of selected astronomical targets will be observed in detail. During this second phase, as well as in the following third phase in which only the infrared camera will be at work, European astronomers will have access to ten percent of the overall pointed observation opportunity.

“The user support team at ESAC are enthusiastic about the first images. They show that we can expect a highly satisfactory return for the European observing programme," said Alberto Salama, ESA Project Scientist for AKARI. “Furthermore, the new data will be of enormous value to plan follow-up observations of the most interesting celestial objects with ESA’s future infrared observatory, Herschel,” he concluded.

Including Seoul National University, South Korea, the project also draws on the involvement of ESA and a consortium of UK universities (Imperial College, London; The Open University & the University of Sussex) funded by the Particle Physics and Astronomy Research Council (PPARC), as well as the SRON Netherlands Institute for Space Research and the Groningen University (NL).

ESA/ESAC provides expertise and support for the sky-survey data processing, through the pointing reconstruction – this allows the determination of accurate astronomical positions for each of the new sources discovered. ESAC also provides user support for the observing opportunities distributed to European astronomers. ESA/ESOC is providing the mission with ground support through its ground station in Kiruna, for several passes per day.