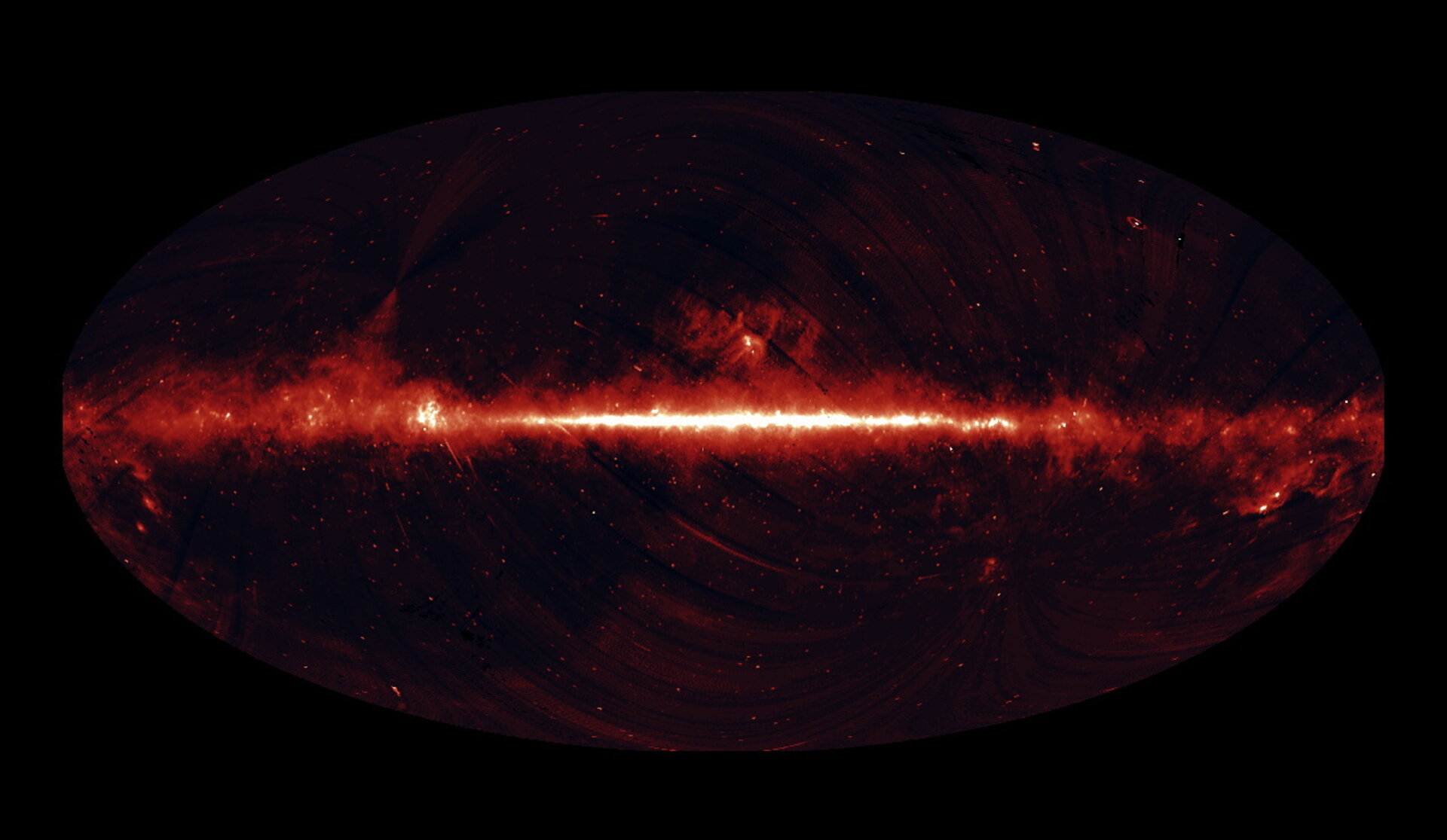 One year after the beginning of its scientific operations, the high-capability infrared satellite AKARI continues to produce stunning views of the infrared Universe.

Launched in February 2006, AKARI is making a comprehensive, multi-wavelength study of the sky in infrared light, helping to gain a deeper understanding of the formation and evolution of galaxies, stars and planetary systems. The mission is a Japan Aerospace Exploration Agency (JAXA) project with ESA and international participation.

In the course of last year, AKARI performed all-sky observations in six wavelength bands. More than 90 percent of the entire sky has so far been imaged. The mission provides the first census of the infrared sky since the atlas made by its only infrared surveyor predecessor, the Anglo-Dutch-US IRAS satellite more than 20 years ago. AKARI has studied about 3500 selected targets during pointed observations, with improved spatial resolution.

The latest results presented by JAXA today show the infrared sky with unprecedented spatial resolution and wavelength coverage and, in particular, many regions of active star formation.

The first two images presented in this article show the entire sky in infrared light at nine micrometres. The bright stripe extending from left to right is the disc of our own Milky Way Galaxy. Several bright regions corresponding to strong infrared radiation appear along or next to the Galactic Plane. These regions are sites of newly born stars. At the brightest region in the very centre of the image, towards the centre of our Galaxy, old stars crowd together. AKARI observed the infrared radiation emitted from the heated interstellar dust.

The inscriptions indicate constellations and regions of intense star formation. The data used to create this image have a spatial resolution of about nine arcseconds, several times finer than IRAS in 1983. Further detailed analysis of this data will help to learn more about the physical conditions of these star formation regions.

The bright spot on the lower-right of the image, indicated as the ‘Large Magellanic Cloud’ shows another galaxy close to our Milky Way, also undergoing active star formation. Even though not visible at the current resolution of this image, there are many more galaxies in the Universe with intense star formation processes. It is one of AKARI’s prime targets to observe these galaxies and build up a comprehensive picture of the star formation history of the Universe.

AKARI’s Far Infrared Surveyor (FIS) instrument also observed the Milky Way and the Orion region. In this image, two views at visual light (left) and infrared light (right) are juxtaposed, both covering a region of about 30x40 square degrees. AKARI’s view is taken at 140 micrometres. For the first time ever, AKARI provided coverage of the Orion region at infrared wavelengths longer than 100 micrometres at such fine resolution.

The very bright source just below the belt of Orion shows the famous Orion Nebula (M42), where many stars are being born. Another major star-forming region including the Horse Head nebula can be seen on the left side of Orion's belt. In contrast to its appearance as a dark cloud in visible light, it is extremely bright in the infrared. The bright extended emission seen in the middle-left part of the image is the so-called Rosette Nebula, yet another star-forming region. Finally, the big circular structure centred at the head of Orion is clearly visible. Apparently many massive stars were formed at the centre of the circle, causing a corresponding series of supernova explosions that has swept out the dust and gas in the region forming a shell-like structure.

This false-colour composite was obtained by AKARI’s Far Infrared Surveyor (FIS) instrument at 90 and 140 micrometres. It shows star-forming regions in the constellation Cygnus, one of the brightest regions in the Milky Way. The image covers 7.6 x 10.0 square degrees. This region is in a direction along the so-called ‘Orion arm’, one of the spiral arms of our Galaxy. Many objects at distances of three thousand to ten thousand light years are projected on this small region. The Galactic plane appears from the top-left to bottom-right.

The many bright spots in the image reveal regions where new stars are being born. They heat up the dust and ionize the gas in their vicinity producing strong infrared radiation. There are only a small number of regions in our Galaxy that exhibit so many massive star-forming regions over such a restricted area of the sky.

The large, dark hollows, also clearly visible on the image, developed from clusters of massive, high-temperature stars that have blown away the surrounding gas and dust by their strong radiation.

AKARI was launched on 21 February 2006. It began its all-sky survey observations in May 2006 and completed its first coverage of the sky in November 2006. The mission is currently in a phase dedicated to pointed observations, interleaved with supplemental scan observations to complete the all-sky survey. It is expected that the mission liquid Helium cryogen will last until at least September 2007.

AKARI is a JAXA mission carried out with the participation of several partners such as: the Nagoya University, The University of Tokyo and National Astronomical Observatory Japan; the European Space Agency (ESA); Imperial College London, the University of Sussex and The Open University (UK); the University of Groningen/SRON (The Netherlands); the Seoul National University (Korea). The far-infrared detectors were developed under collaboration with the National Institute of Information and Communications Technology (Japan).

ESA’s European Space Astronomy Centre (ESAC), Madrid, Spain provides expertise and support for the sky-survey data processing through the pointing reconstruction – this allows the determination of accurate astronomical positions for each of the sources detected. ESAC also provides user support for the European astronomers who have been granted observing opportunities. ESA’s Operations Centre (ESOC) in Darmstadt, Germany, is providing the mission with ground support through its ground station in Kiruna, for several passes per day.