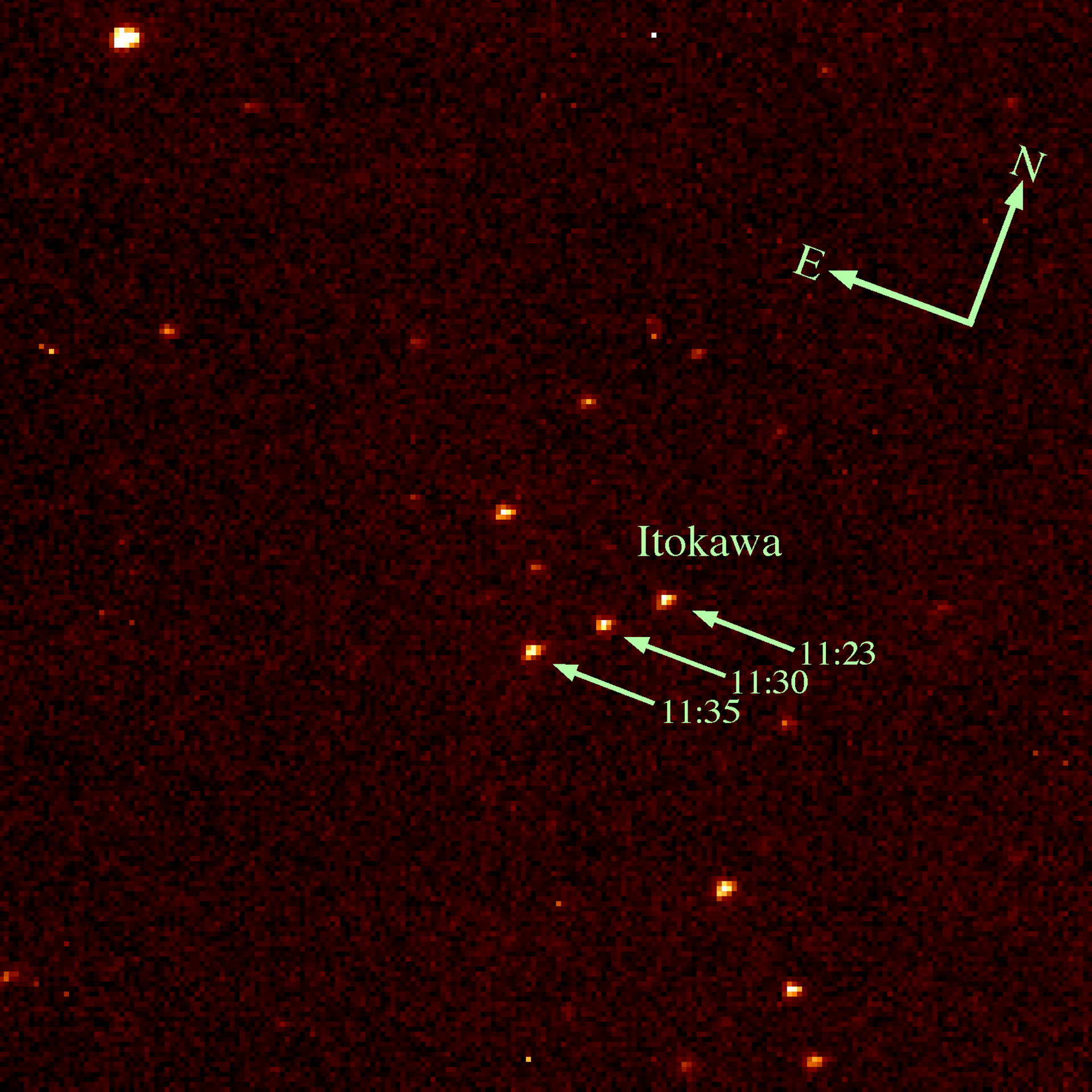 The space-borne infrared observatory AKARI, observed asteroid Itokawa last month with its Infrared Camera. The data will be used to refine estimates of sizes of potentially hazardous asteroids in the future.

The data collected by AKARI, a JAXA mission with ESA participation, complements that from JAXA’s asteroid explorer Hayabusa in late April this year.

As AKARI observed Itokawa on 26 July it was in the constellation of Scorpius, and was about 19 magnitudes bright in visible light. The asteroid and Earth were closest to each other, at a distance of about 42 million km (for comparison, Earth is 150 million km from the Sun). Given how close it was, Itokawa moved a significant distance on the sky over the short observing time.

Using observational data of asteroids such as Itokawa in combination with data from the explorer, models that estimate asteroid sizes can be made more accurate. This is especially useful for estimating the size of potentially hazardous asteroids which may be discovered in the future.

Before Hayabusa arrived at Itokawa, many observations to determine the asteroid's approximate size had already been attempted. Among the many different methods of measurement, the most accurate estimate was achieved by mid-infrared observations.

With AKARI, it was possible to observe Itokawa at several different wavelengths in the mid-infrared range, obtaining a much more comprehensive set of data. This data is very important, not only for the study of the asteroid’s infrared properties, but also for use as a template and source of comparison with other asteroids, to improve the estimates of their sizes.

Most sunlight falling on Itokawa is absorbed, heating the asteroid up. It then re-emits this energy as bright infrared light, which was in turn observed by AKARI. Only a small fraction of the incident sunlight is reflected from Itokawa, making it a very faint object when observed in visible light. It is very hard to observe using telescopes of sizes similar to that of AKARI from ground.

Asteroid size is one of the most sought-after pieces of information. For asteroids that are not explored directly, their sizes can be estimated based on various observations from Earth. The temperature of asteroids is determined by the balance between the energy input from incident sunlight, and the output, emitted as infrared radiation.

AKARI has also made observations of possible candidates for future asteroid exploration. It is expected that this detailed information will help greatly further our knowledge of these interesting relics of our Solar System.

The observation of Itokawa was carried out by the asteroids observation group in the AKARI Solar-System Object consortium led by Dr Sunao Hasegawa at the Institute for Space and Astronautical Science (ISAS) in Japan.

AKARI is a JAXA mission with the participation of several partners: Nagoya University, University of Tokyo and National Astronomical Observatory in Japan; ESA; Imperial College London, University of Sussex and The Open University in the UK; University of Groningen / SRON (The Netherlands) and Seoul Nationa University (Korea).

The far-infrared detectors were developed in collaboration with The National Institute of Information and Communications Technology (Japan).

ESA’s European Space Astronomy Centre (ESAC) provides expertise and support for the sky-survey data processing through the pointing reconstruction. This allows the determination of accurate astronomical positions for each of the sources detected. ESAC also provides user support for the European astronomers who have been granted observing opportunities. ESA/ESOC is providing the mission with ground support through its ground station in Kiruna, for several passes per day.

AKARI was launched on 21 February 2006. It began its all-sky survey in May 2006 and completed its first coverage of the sky in November 2006. About 80 percent of the entire sky has been imaged by AKARI so far. The mission is currently in a phase dedicated to pointed observations, interleaved with observations that fill gaps in the all-sky survey.