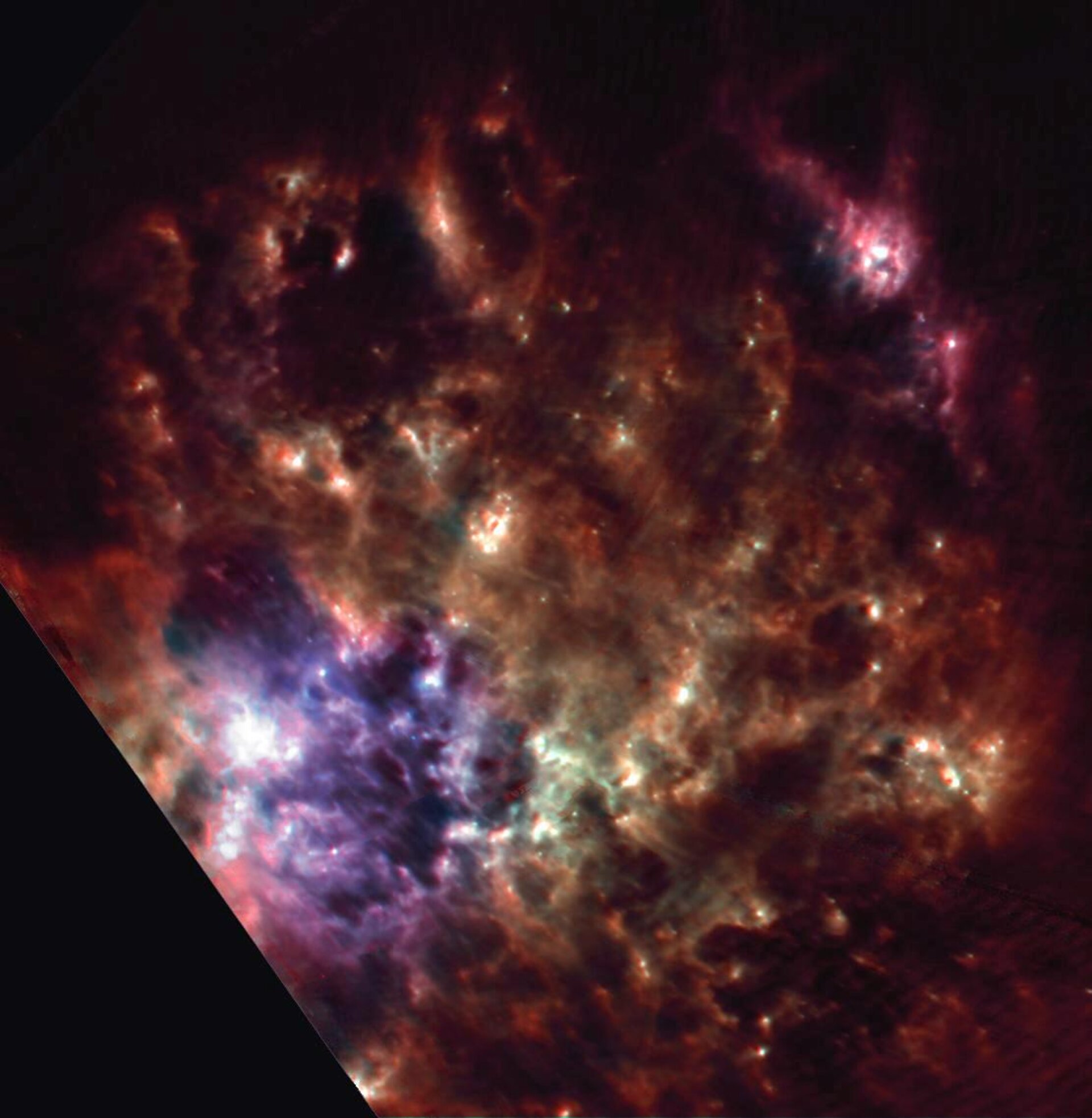 The infrared surveyor AKARI, a Japan Aerospace Exploration Agency (JAXA) mission with ESA participation, is nearing the completion of its first scan of the entire sky. During this phase of the mission, it has supplied the largest wavelength coverage of the Large Magellanic Cloud to date, and provided fascinating new images of this galaxy.

The Large Magellanic Cloud is a neighbouring galaxy to the Milky Way, the galaxy to which our Solar System belongs. It is located extremely close by astronomical standards, at a distance of 160 000 light years and it contains about 10 thousand million stars, about one tenth of our Galaxy's stellar population.

The first image is a far-infrared view obtained by the Far-Infrared Surveyor (FIS) instrument on board AKARI. It reveals the distribution of interstellar matter – dust and gas – over the entire galaxy. Dust grains in these interstellar clouds are heated by the light from newly born stars, and subsequently re-radiate this energy in the form of infrared light. So, the infrared emission indicates that many stars are currently being formed. Such copious star formation activity across a whole galaxy is called a 'star burst'.

The nature of the Large Magellanic Cloud is further revealed by the contrasting distribution of the interstellar matter and the stars. The interstellar matter forms a disk-like structure whilst the stars are located in the 'spindle' shape in the lower half of the image. This shows that the two components are clearly displaced from one another.

Astronomers believe that the observed star formation and the displacement of these two components in the Large Magellanic Cloud were both triggered by the gravitational force generated by our own Galaxy, the Milky Way.

The bright region in the bottom-left of the image is known as the 'Tarantula Nebula'. It is a very productive factory of stars.

The second image was taken at near- and mid-infrared wavelengths by AKARI's Infrared Camera (IRC), and provides a close-up view of part of the Large Magellanic Cloud.

These and new data obtained by AKARI will unlock the secrets of how both the Large Magellanic Cloud and our own Galaxy have formed and evolved to their current state.

AKARI was launched on 21 February 2006. It started its all-sky survey observations in May 2006 and will complete its first sky coverage in November this year. According to current estimations, about 70 percent of the whole sky has so far been imaged by AKARI.

JAXA's AKARI project is carried out with the main participation of the following institutes: the Nagoya University, the University of Tokyo, the National Astronomical Observatory Japan, the European Space Agency (ESA), the Imperial College of London, the University of Sussex, the Open University (UK), the University of Groningen / SRON (The Netherlands), the Seoul National University (Korea). The far-infrared detectors were developed under collaboration with The National Institute of Information and Communications Technology in Japan.

ESA/ESAC provides expertise and support for the sky-survey data processing through the pointing reconstruction – this allows the determination of accurate astronomical positions for each of the new sources discovered. ESAC also provides user support for the European astronomers who have been granted observing opportunities. ESA/ESOC is providing the mission with ground support through its ground station in Kiruna, for several passes per day.