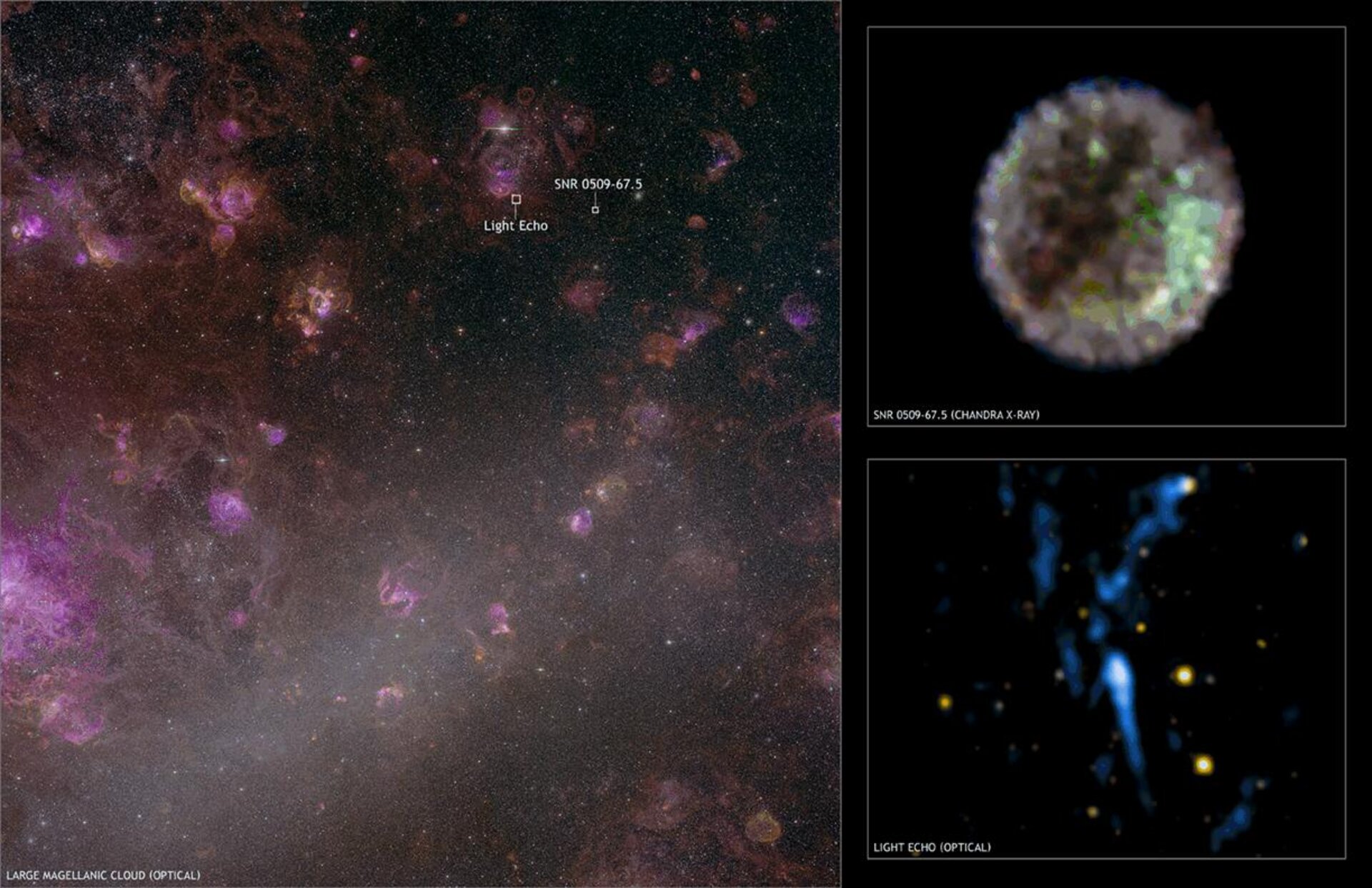 Astronomers have made the best ever determination of the power of a supernova explosion that was visible from Earth long ago. By observing the remnant of a supernova and a light echo from the initial outburst, they have established the validity of a powerful new method for studying supernovas.

Using data from NASA's Chandra X-ray Observatory, ESA's XMM-Newton Observatory, and the Gemini Observatory, two teams of researchers studied the supernova remnant and its light echo, located in the Large Magellanic Cloud (LMC), a small galaxy about 160 000 light-years from Earth. They concluded that the supernova occurred about 400 years ago (in Earth’s time frame), and was unusually bright and energetic.

This result is the first time two methods - X-ray observations of a supernova remnant and optical observations of the expanding light echoes from the explosion - have both been used to estimate the energy of a supernova explosion. Up until now, scientists had only made such an estimate using the light seen soon after a star exploded, or using remnants that are several hundred years old, but not from both.

"People didn't have advanced telescopes to study supernovas when they went off hundreds of years ago," said Armin Rest of Harvard University, who led the light echo observations using Gemini. "But we've done the next best thing by looking around the site of the explosion and constructing an action replay of it."

The explosion's energy was estimated by studying an echo of the original light of the explosion. Just as sound bounces off walls of a canyon, so too can light waves create an echo by bouncing off dust clouds in space. The light from these echoes travels a longer path than the light that travels straight toward us, and so can be seen hundreds of years after the supernova itself.

The Chandra data, along with XMM-Newton data obtained in 2000, was then independently used to calculate the amount of energy involved in the original explosion, using an analysis of the supernova remnant and state-of-the-art explosion models. Their conclusion confirmed the results from the optical data, namely that the explosion was an especially energetic and bright variety of Type Ia supernova. This agreement provides strong evidence that the detailed explosion models are accurate.

"Having these two methods agree lets us breathe a sigh of relief," said Carlos Badenes of Princeton University who led the Chandra and XMM-Newton study. "It looks like we're on the right track with trying to understand these big explosions. Their stellar debris really can retain a memory of what created them hundreds of years earlier."

Both methods estimated a similar time since the explosion of about 400 years. An extra constraint on the age comes from the lack of recorded historical evidence for a recent supernova in the LMC. Because this star appears in the southern hemisphere, it likely would have been seen by navigators who noted similarly bright celestial events if it had occurred less than about 400 years ago.

Because Type Ia supernovas have nearly uniform intrinsic brightness, they are used as important tools by scientists to study the expansion of the universe and the nature of dark energy.

"It's crucial to know that the basic assumptions about these explosions are correct, so they're not used just as black-boxes to measure distances," said Badenes.

This work is also being extended to other supernova remnants and light echoes.

"This is the first case where the conclusions that are drawn from the supernova remnant about the original explosion can be directly tested by looking at the original event itself," said Rest. "We'll be able to learn a lot about supernovas in our own galaxy by using this technique."

These results appear in two papers recently accepted in The Astrophysical Journal. The first discusses the spectrum obtained by Gemini, led by Rest. The second, with Badenes as first author, details the Chandra and XMM observations of SNR 0509-67.5.

XMM-Newton science operations are handled at ESA’s European Space and Astronomy Centre (ESAC). The satellite was designed and built to return data for at least a decade. It has detected more X-ray sources than any previous satellite and is helping solve many cosmic mysteries of the violent Universe, from what happens in and around black holes to the formation of galaxies in the early Universe. The satellite uses over 170 wafer-thin cylindrical mirrors spread over three telescopes.

Its orbit takes it almost a third of the way to the Moon, so that astronomers can enjoy long, uninterrupted views of celestial objects. NASA's Marshall Space Flight Center, Alabama, USA manages the Chandra program for the agency's Science Mission Directorate. The Smithsonian Astrophysical Observatory controls science and flight operations from the Chandra X-ray Center in Massachusetts, USA.