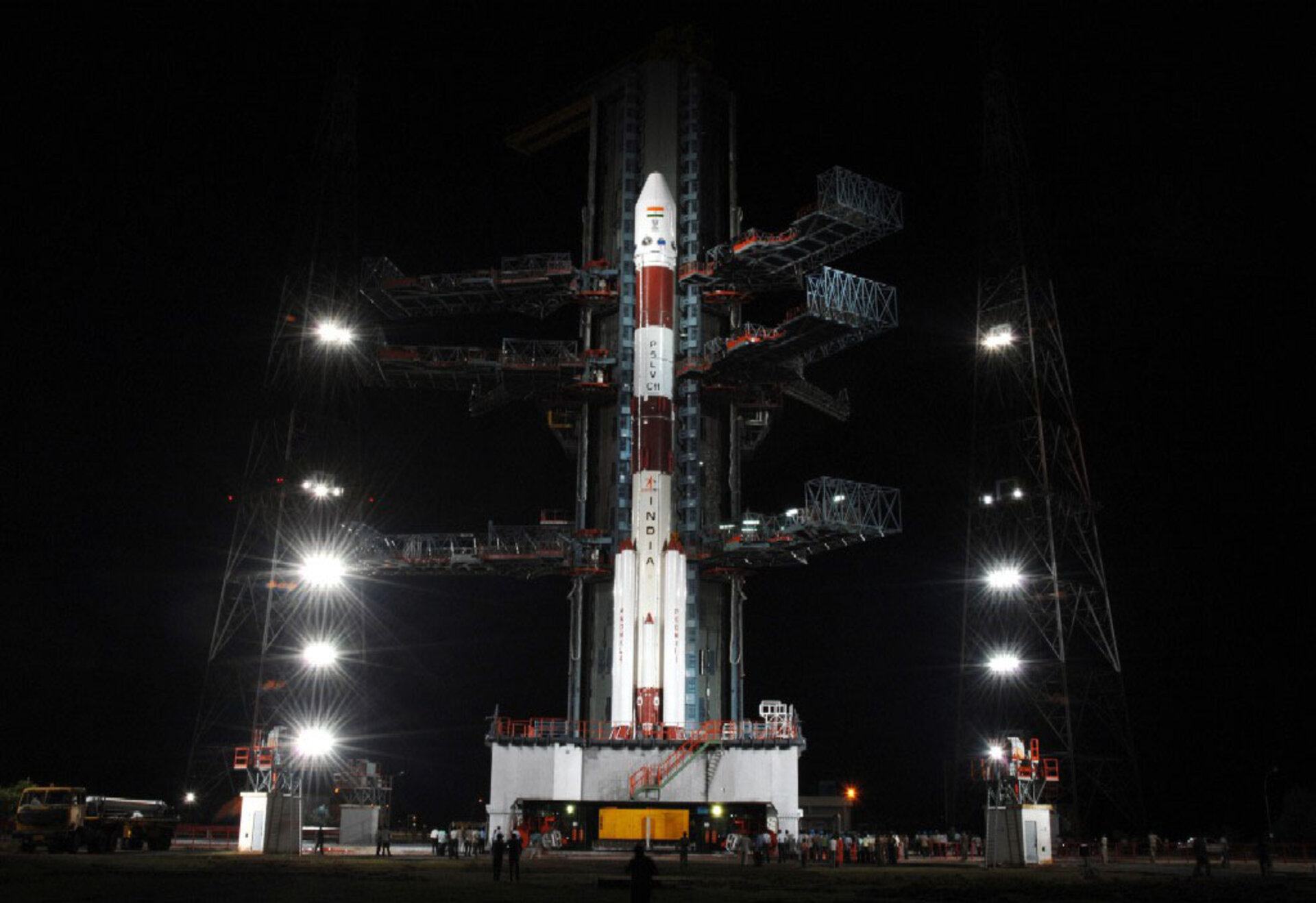 Final preparations are under way for the launch of India’s first mission to the Moon, Chandrayaan-1. The spacecraft is due to take off early tomorrow morning, 22 October 2008, on India’s own Polar Satellite Launch Vehicle from the Satish Dhawan Space Centre (SHAR) in Sriharikota, India.

The launch can be followed live on the official website of ISRO, the Indian Space Research Organization. The webcast will start at 02:30 am and continue until 03:30 am Central European Summer Time (CEST).

Chandrayaan-1 will map the Moon at high resolution and different wavelengths to help understand the origin and evolution of our only natural satellite. The mission will make a detailed study of the Moon’s mineralogy, and will generate a digital 3D atlas of the Moon's surface. The mission will also look for water ice around the poles.

Journey to the Moon

It will take about 2 weeks for Chandrayaan-1 to reach its final orbit around the Moon. After launch, it will first be injected into a highly elliptical 7-hour orbit around Earth, reaching between 240 km and 24 000 km above our planet. Chandrayaan-1 will then spiral outwards on increasingly elongated ellipses around Earth, until it reaches the ‘lunar transfer orbit’, some 387 000 km from Earth.

Once the spacecraft reaches the closest point to the Moon along the lunar transfer orbit, the major ‘lunar orbit insertion’ manoeuvre will decelerate it to allow the Moon’s gravity to capture it into an elliptical lunar orbit. A series of manoeuvres will progressively lower the altitude of Chandrayaan-1 around the Moon until it reaches its final 100 km-high circular orbit.

At the earliest opportunity, the spacecraft will eject the ‘Moon Impact Probe’ to provide information on lunar surface properties. The mission will then continue from orbit, with remote-sensing studies by its 11 scientific instruments.

Three of these instruments were provided by Europe: the X-ray and infrared spectrometers (C1XS and SIR-2) for mineralogical and chemical mapping of the surface, and the SARA instrument, the first lunar experiment dedicated to studying the interaction between the solar wind and the lunar surface. The delivery to ISRO of the three instruments, provided by the UK, Germany and Sweden, respectively, was coordinated by ESA under an agreement signed with ISRO in 2005.

Chandrayaan-1 is led by ISRO. Further to coordinating the provision of the three European instruments, ESA has provided support in areas such as flight dynamics, and is providing support for data archiving and processing. Other partners of ISRO in the Chandrayaan-1 mission include Bulgaria and the USA.

The Chandrayaan-1 Imaging X-Ray Spectrometer (C1XS) was developed by the Rutherford Appleton Laboratory (RAL) in the UK in collaboration with the ISRO Satellite Centre, Bangalore. It will measure the abundance of magnesium, aluminium, silicon, iron and titanium over the surface of the Moon.

The SMART Near-Infrared Spectrometer (SIR-2) was developed by the Max Planck Institute for Solar System Science, Germany. It will explore the mineral resources of the Moon, the formation of its surface features and the different layers of the Moon’s crust.

The Sub-kiloelectronvolt Atom Reflecting Analyser (SARA) was developed by the Swedish Institute of Space Physics in collaboration with the Space Physics Laboratory of the Vikram Sarabhai Space Centre in Thiruvananthapuram, India. It will study the way the Moon’s surface interacts with the solar wind, and the surface’s magnetic anomalies.