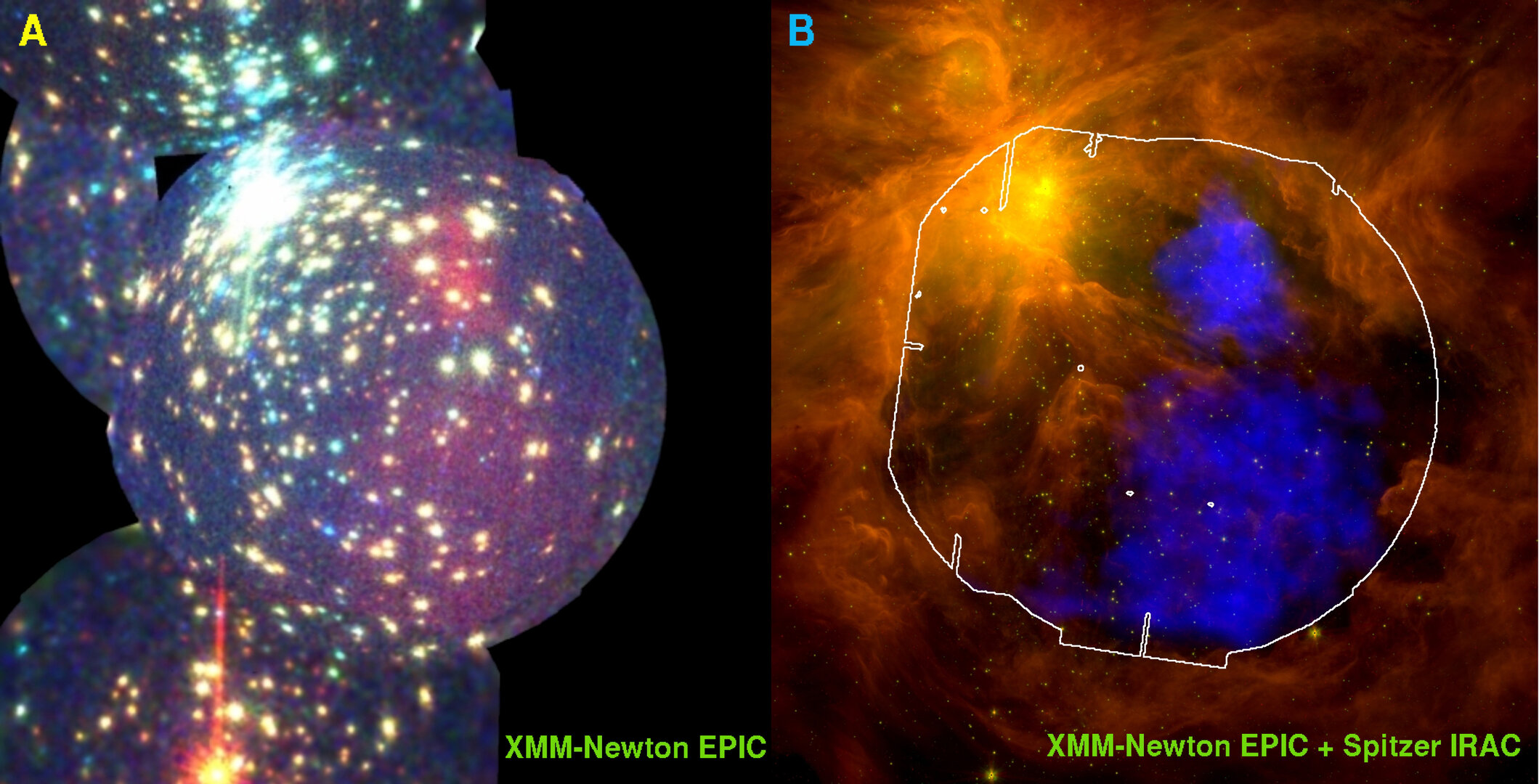 Right in time for the festive season, ESA's XMM-Newton X-ray observatory has discovered a huge cloud of high-temperature gas resting in a spectacular nearby star-forming region, shaped somewhat like the silhouette of Santa Claus.

An early present for astronomers, the cloud suggests that hot gas from many star-forming regions leaks into the interstellar medium.

The Orion nebula is the nearest dense star-forming region to Earth that contains stars much more massive than the Sun. XMM-Newton’s newly-discovered gas cloud is composed of winds blowing from these high-mass stars that are heated to millions of degrees as they slam into the surrounding gas.

“There is one star in particular that dominates the nebula,” says Manuel Güdel, Paul Scherrer Institut, Switzerland, who led the team that discovered the gas. The star in question is theta1 Orionis C, a giant star around 40 times mass of the Sun, with a surface temperature of 40,000°C. Güdel and his colleagues think that the violent collision between the wind from this star and the surrounding dense gas is largely responsible for the newly-discovered hot gas cloud.

The high-temperature gas fills a region of the nebula that appears to be a huge cavity in optical and infrared images. The new observations, taken with XMM-Newton’s European Photon Imaging Camera (EPIC) camera, suggest that astronomers are seeing only a particular portion of the gas. The X-rays from this portion escape absorption by patches of cold gas covering much of the front of the Orion nebula.

The surrounding pattern of absorbing clouds gives the detected gas its Santa Claus shape, with his prominent hat outlined by the northern gas bubble. In its entirety, the hot gas probably fills the whole nebula.

The team discovered it whilst conducting a survey of the young stars in the region. In the background of many of those images was a faint glow of X-rays. “The diffuse signal came up time and time again. Finally, we realized that it was something real,” says Güdel.

The presence of the hot gas in a fairly common nebula like Orion is surprising. Although theory has predicted such hot gas clouds, previous observations suggested that a large number of massive stars shedding winds, or supernova explosions are required. These are found in some regions of vigorous high-mass star formation, which are scattered only rarely throughout the galaxy. The new observations show that much smaller collections of high mass stars can produce hot gas as well.

There are many star-forming regions similar to the Orion nebula throughout the galaxy, so there should be a network of channels and bubbles being filled up by the hot gas leaking from these various regions. “This is another possible way to enrich the interstellar medium. You don’t have to wait for a sudden supernova to explode. You can do it with just one or two massive stars over millions of years,” says Güdel.

The team now plans to obtain new observations to determine how the gas flows out of the Orion nebula. In particular, they want to see whether it connects with a giant bubble created by supernova explosions from previous generations of massive stars.

The paper reporting the discovery of the Orion plasma cloud, entitled "A million-degree plasma pervading the extended Orion nebula" appears in Science Express, the online version of the journal Science on 29 November 2007.