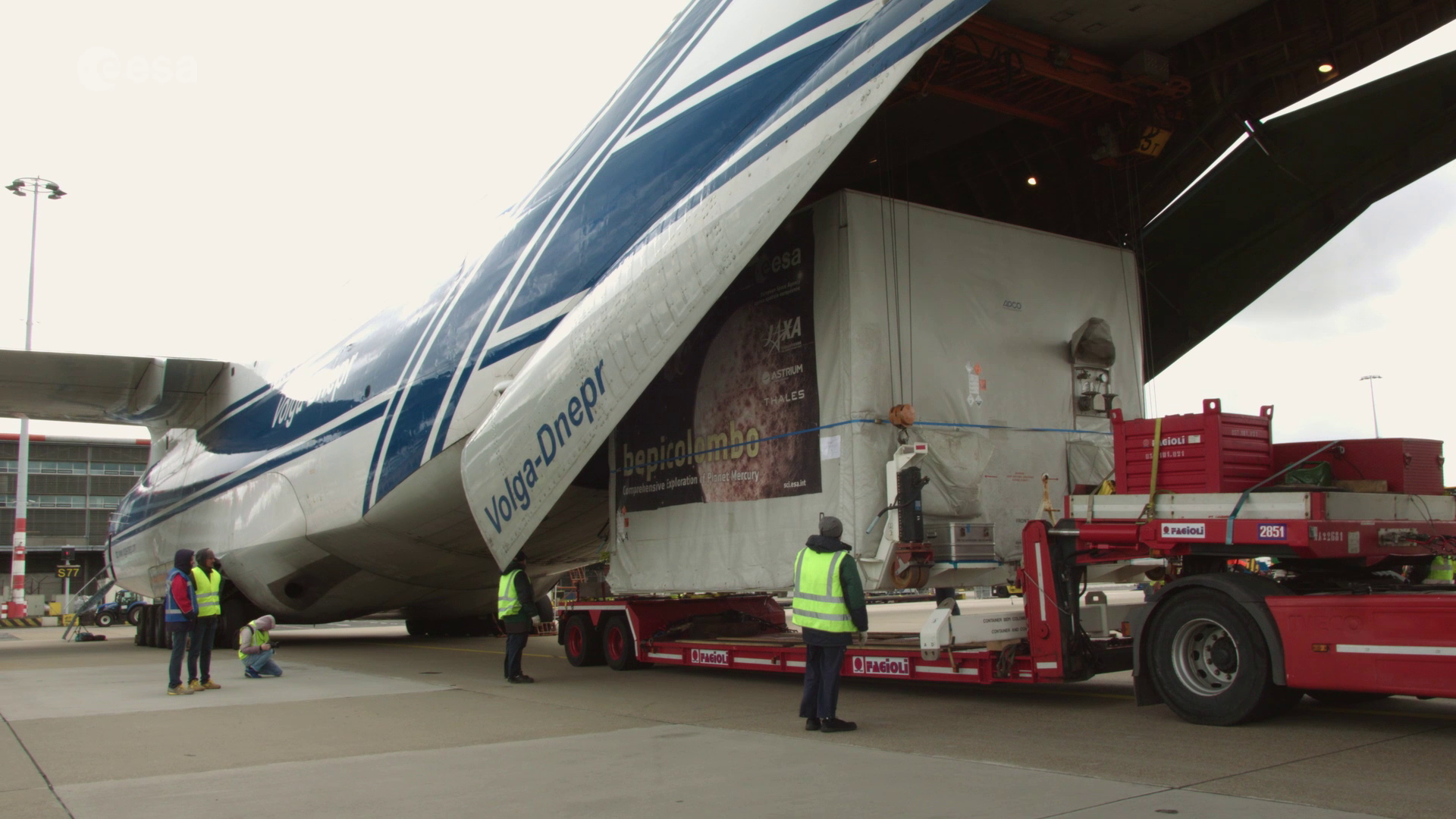 The spacecraft of the BepiColombo mission to Mercury have arrived safely at Europe’s Spaceport in Kourou, French Guiana, marking the start of six months of preparation to ready the craft for launch.

The joint ESA-JAXA mission, which comprises three spacecraft modules and a sunshield, were transported from their home base in ESA’s technical heart in the Netherlands by road to Amsterdam Schiphol airport. They were flown to Kourou, French Guiana, on a series of four Antonov cargo aircraft over the last two weeks.

They were accompanied by approximately 40 containers of essential ground-support equipment, hardware, and other loose items needed for the pre-launch testing and configuring the spacecraft at the launch facility. Another 15 containers travelled by sea.

The shipments also included personal items: many of the team will be spending much of the next six months away from home, dedicated to preparing the mission for launch.

Amongst the first tasks at the Spaceport were setting up offices and control rooms, and establishing network connections to support remote links for teams elsewhere in the world to interface with the test equipment that will be connected to the spacecraft.

The readiness of the cleanrooms in the satellite preparation facility was also verified.

Once the spacecraft arrived, their containers were opened and the modules lifted out on their respective multi-purpose trolleys for inspection, to confirm that no problems arose from the transport. The spacecraft were also switched on and batteries tested, and the various mechanical and electrical ground support systems installed.

Over the next six months activities will include attaching the solar wings to the modules and their deployment mechanisms tested, dressing the spacecraft in protective insulation to prepare for the harsh space environment and extreme temperatures they will experience operating close to the Sun, installing the sunshield, conducting pressure tests, fuelling, and connecting the three spacecraft together.

The ESA Mercury Planetary Orbiter and the JAXA Mercury Magnetospheric Orbiter will travel together to the innermost planet, carried by ESA’s Mercury Transfer Module.

The final weeks will see the completed spacecraft stack inside the Ariane 5 rocket fairing, and preparing the launch vehicle itself, ready to blast the mission on a seven-year journey around the inner Solar System to reach Mercury and start investigating its mysteries.

The upcoming launch window opens on 5 October and closes 29 November 2018.