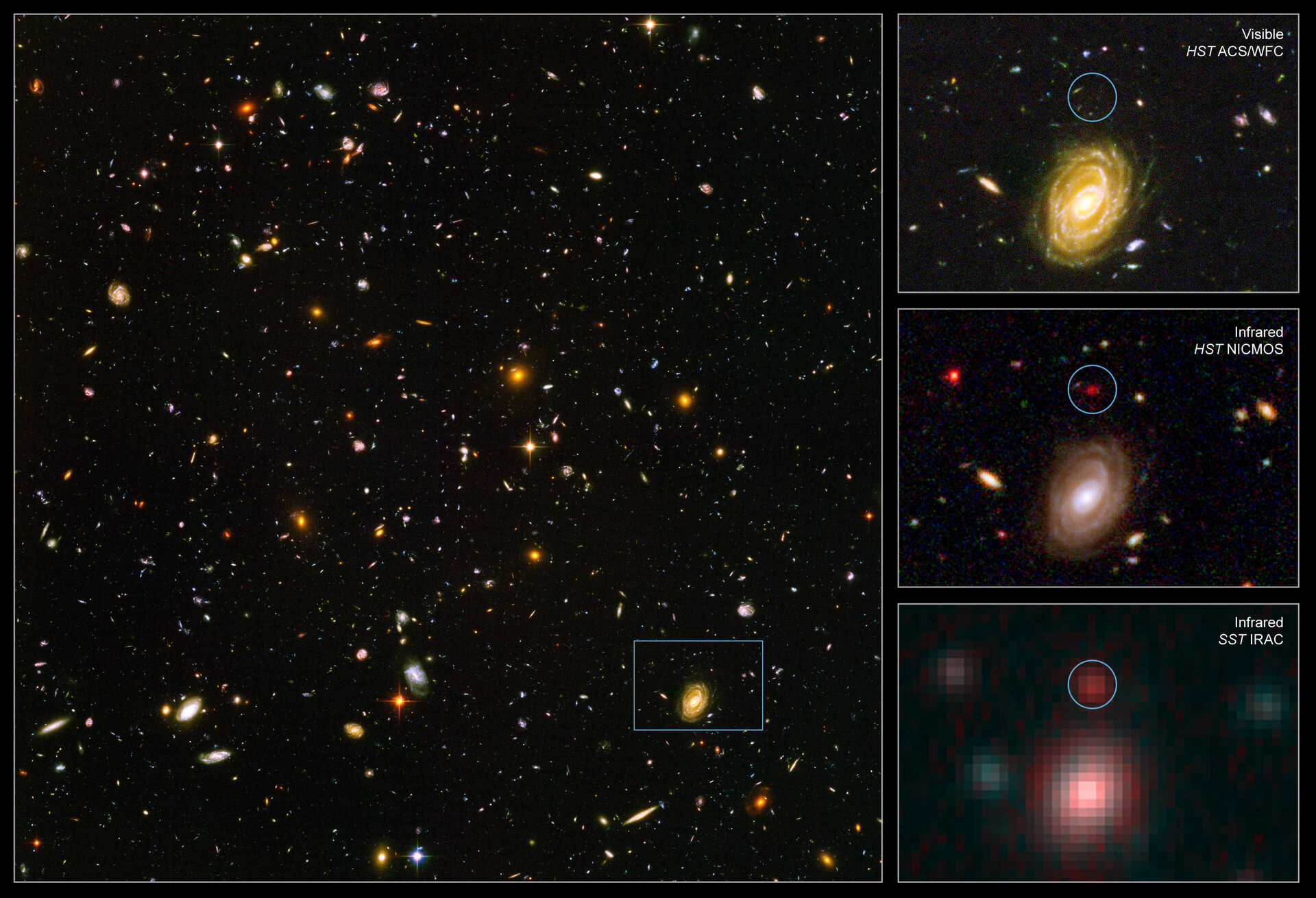 The NASA/ESA Hubble Space Telescope and NASA’s Spitzer Space Telescope have teamed up to 'weigh' the stars in distant galaxies. One of these galaxies is not only one of the most distant ever seen, but it appears to be unusually massive and mature for its place in the young Universe.

This has surprised astronomers because the earliest galaxies in the Universe are commonly thought to have been much smaller agglomerations of stars that gradually merged together later to build the large majestic galaxies like our Milky Way.

"This galaxy appears to have 'bulked up' amazingly quickly, within a few hundred million years after the Big Bang," said Bahram Mobasher of the European Space Agency and the Space Telescope Science Institute, a member of the team that discovered the galaxy.

"It made about eight times more mass in terms of stars than are found in our own Milky Way today, and then, just as suddenly, it stopped forming new stars. It appears to have grown old prematurely."

The galaxy, HUDF-JD2, was pinpointed among approximately 10 000 others in a small patch of sky called the Hubble Ultra Deep Field (HUDF). Thanks to the Hubble Space Telescope, this area is captured in the deepest images of the Universe ever made by mankind at optical and near-infrared wavelengths.

The galaxy was detected using Hubble's Near Infrared Camera and Multi-Object Spectrometer (NICMOS), but at near-infrared wavelengths it is very faint and red.

It is also within the deepest survey from the Spitzer Space Telescope, the Great Observatories Origins Deep Survey (or GOODS). The galaxy is believed to be about as far away as the most distant galaxies and quasars now known. The light reaching us today began its journey when the Universe was only about 800 million years old.

Scientists studying the HUDF found this galaxy in Hubble's infrared images and expected it to be a very young 'baby' galaxy, similar to others known at comparable distances. Instead, they found a 'teenager', much bigger than other galaxies known from this early cosmic era, and already very mature.

Hubble's Advanced Camera for Surveys (ACS) does not see the galaxy at all, despite the fact that the HUDF is the deepest image ever taken in optical light. This indicates that the galaxy's blue light has been absorbed by travelling for millions of light-years through intervening hydrogen gas.

However, the big surprise was how much brighter the galaxy is in images from Spitzer's Infrared Array Camera (IRAC), which easily detects it at wavelengths as much as 15 times longer than those seen by the Hubble.

Spitzer's IRAC is sensitive to the light from older, redder stars, which should make up most of the mass in a galaxy, and the brightness of the galaxy suggests that it is very massive indeed.

Previous observations have revealed evidence for mature stars in more ordinary, less massive galaxies at similar distances. Other joint Spitzer and Hubble analyses identify more galaxies nearly as massive as the Milky Way, seen when the Universe was less than one thousand million years old.

The new observations by Mobasher and his colleagues dramatically extend this notion of surprisingly mature ‘baby galaxies’ to an object which is perhaps ten times more massive, and seems to have formed its stars even earlier in the history of the Universe.