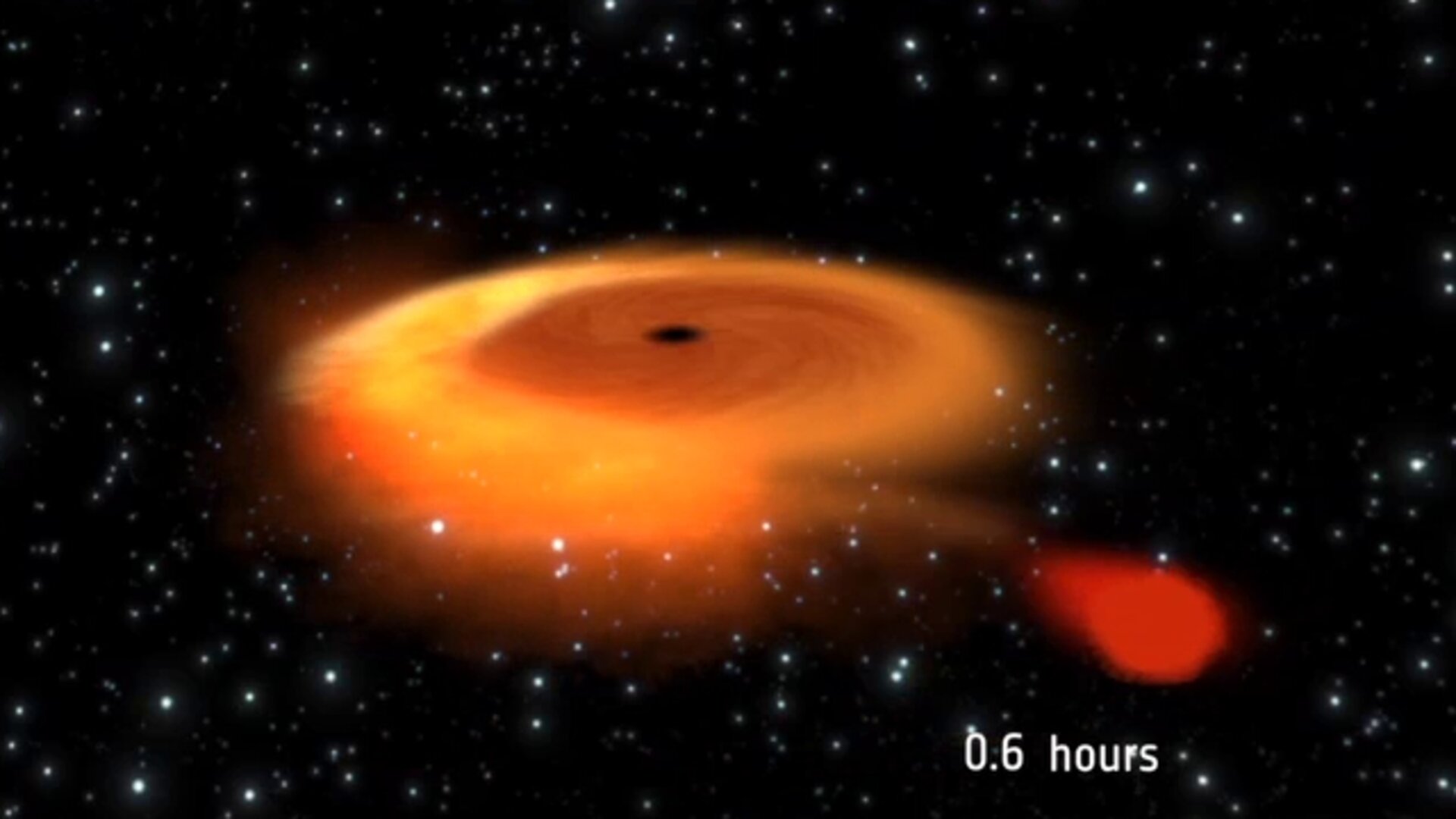 ESA’s XMM-Newton space telescope has helped to identify a star and a black hole that orbit each other at the dizzying rate of once every 2.4 hours, smashing the previous record by nearly an hour.

The black hole in this compact pairing, known as MAXI J1659-152, is at least three times more massive than the Sun, while its red dwarf companion star has a mass only 20% that of the Sun. The pair is separated by roughly a million kilometres.

The duo were discovered on 25 September 2010 by NASA’s Swift space telescope and were initially thought to be a gamma-ray burst. Later that day, Japan’s MAXI telescope on the International Space Station found a bright X-ray source at the same place.

More observations from ground and space telescopes, including XMM-Newton, revealed that the X-rays come from a black hole feeding off material ripped from a tiny companion.

Several regularly-spaced dips in the emission were seen in an uninterrupted 14.5 hour observation with XMM-Newton, caused by the uneven rim of the black hole’s accretion disc briefly obscuring the X-rays as the system rotates, its disc almost edge-on along XMM-Newton’s line of sight.

From these dips, an orbital period of just 2.4 hours was measured, setting a new record for black hole X-ray binary systems. The previous record-holder, Swift J1753.5–0127, has a period of 3.2 hours.

The black hole and the star orbit their common centre of mass. Because the star is the lighter object, it lies further from this point and has to travel around its larger orbit at a breakneck speed of two million kilometres per hour – it is the fastest moving star ever seen in an X-ray binary system. On the other hand, the black hole orbits at ‘only’ 150 000 km/h.

“The companion star revolves around the common centre of mass at a dizzying rate, almost 20 times faster than Earth orbits the Sun. You really wouldn’t like to be on such a merry-go-round in this Galactic fair!” says lead author Erik Kuulkers of ESA’s European Space Astronomy Centre in Spain.

His team also saw that they lie high above the Galactic plane, out of the main disc of our spiral Galaxy, an unusual characteristic shared only by two other black-hole binary systems, including Swift J1753.5–0127.

“These high galactic latitude locations and short orbital periods are signatures of a potential new class of binary system, objects that may have been kicked out of the Galactic plane during the explosive formation of the black hole itself,” says Dr Kuulkers.

Returning to MAXI J1659−152, the quick response of XMM-Newton was key in being able to measure the remarkably short orbital period of the system.

“Observations started at tea-time, just five hours after we received the request to begin taking measurements, and continued until breakfast the next day. Without this rapid response it would not have been possible to discover the fastest rotation yet known for any binary system with a black hole,” adds Norbert Schartel, ESA’s XMM-Newton project scientist.