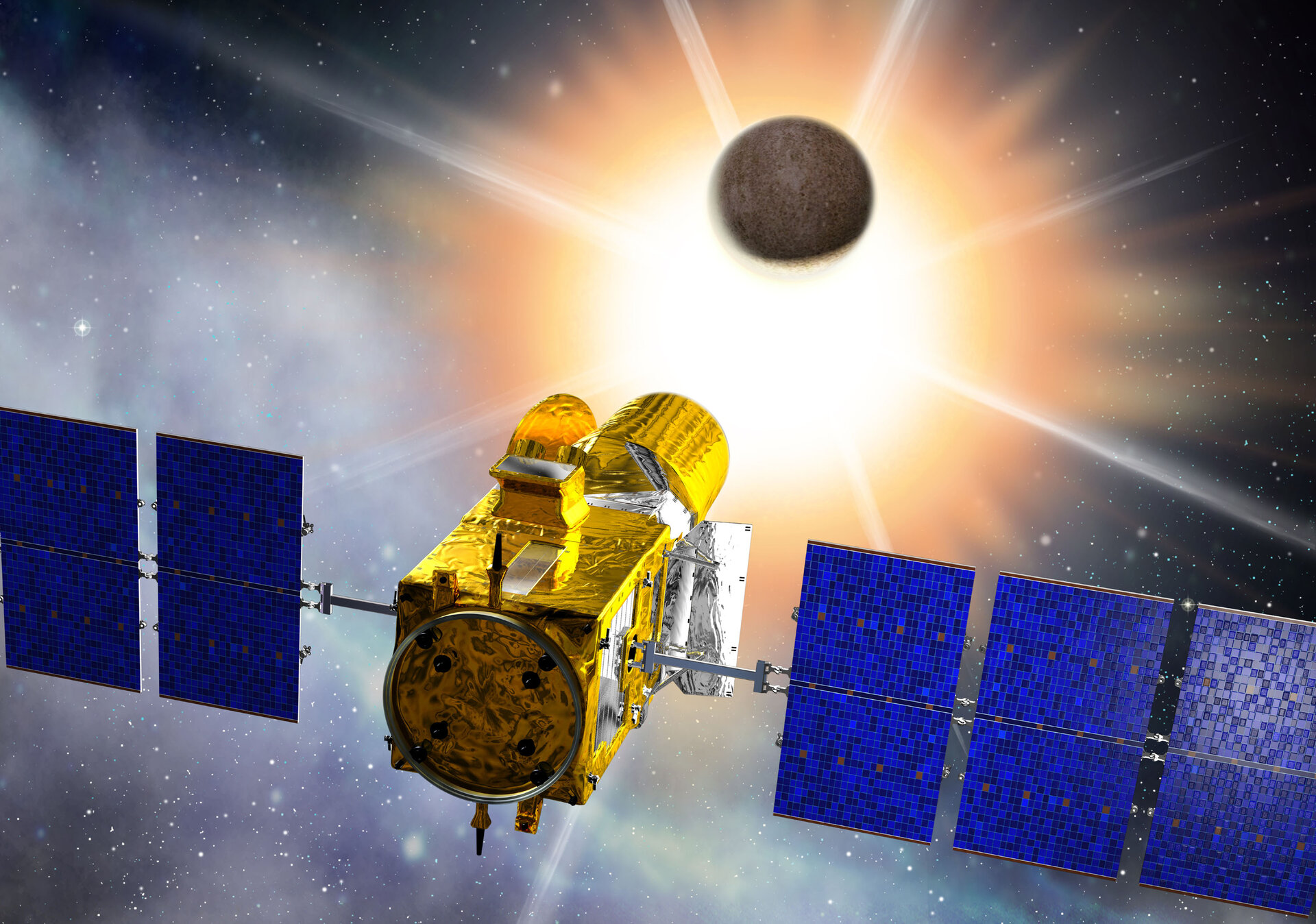 COROT stands for 'Convection, Rotation and planetary Transits'. The name describes the scientific goals of the mission:

To accomplish these two scientific objectives COROT will monitor about 120 000 stars with its 30-centimetre telescope.

COROT will lead a bold new search for planets around other stars. In the decade since the discovery of the first exoplanet, 51 Pegasi b in 1995, more than 200 other planets have been detected from ground-based observatories. COROT promises to find many more during its two-and-a-half-year mission, and to expand the frontiers of our knowledge toward ever smaller planets.

The method used is that of 'planetary transits'. It consists of detecting a planet by the small periodic drop in brightness of the star it orbits around. Thanks to this method, it is also possible to unveil both orbital period and size (radius) of the planets detected. The planet finding programme consists of observing, in a systematic way, fields of 12 000 stars.

Most of the planets COROT will detect are expected to be 'hot-Jupiters'. Each hot Jupiter is a large gas giant planet in close orbit around its central star. Potential rings or satellites could also be detected around these planets.

COROT will be the first also mission capable of detecting rocky planets, several times larger than Earth (or even smaller), around nearby stars. Planets outside our Solar System are referred to as 'exoplanets'. The number of the rocky planets that COROT will detect is still unknown, but it could be a few tens. If COROT finds these worlds, they will represent a new class of planet, for which COROT will provide the first ever mapping.

Of the rocky worlds, COROT is most sensitive to those with orbits of 50 days or less. During the long 150-day observation runs planned in the mission, such planets will show a repeated transit. A 50-day (or less) orbital duration would place them closer to their parent star than Mercury is to the Sun. In most cases, such proximity to a star would scorch them beyond habitability. However, if such a world were discovered around a red dwarf star, it could be placed at exactly the right distance for liquid water to exist on its surface.

While it is looking at a star, COROT will also be able to detect 'starquakes', acoustic waves generated deep inside a star that send ripples across a star's surface, also altering its brightness. The exact nature of the ripples allows astronomers to calculate the star's precise mass, age and chemical composition.

This technique is known as 'asteroseismology' and ESA's Solar and Heliospheric Observatory (SOHO) has been taking similar observations of the Sun for years. The COROT data is therefore essential to compare the Sun with other stars.

In particular, the purpose of stellar seismology is to analyse the vibration modes of stars which, subject to gravitational forces, Coriolis forces and pressure, behave as oscillators with many specific modes.

The frequency, the amplitude and the lifetime of these modes make it possible to determine some important parameters of stellar physics, such as the size and the composition of the core, the boundaries between radiative and convective zones, and the internal profile of rotation.

These oscillating modes, which generate variations of luminosity at the surface of the star, and the elementary particles called 'neutrinos', provide the only information coming from the depths of the stars. Acquired and collected for stars with different mass, age and chemical composition, the COROT 'light curves' will yeld a significant amount of data of a new kind about stellar evolution.