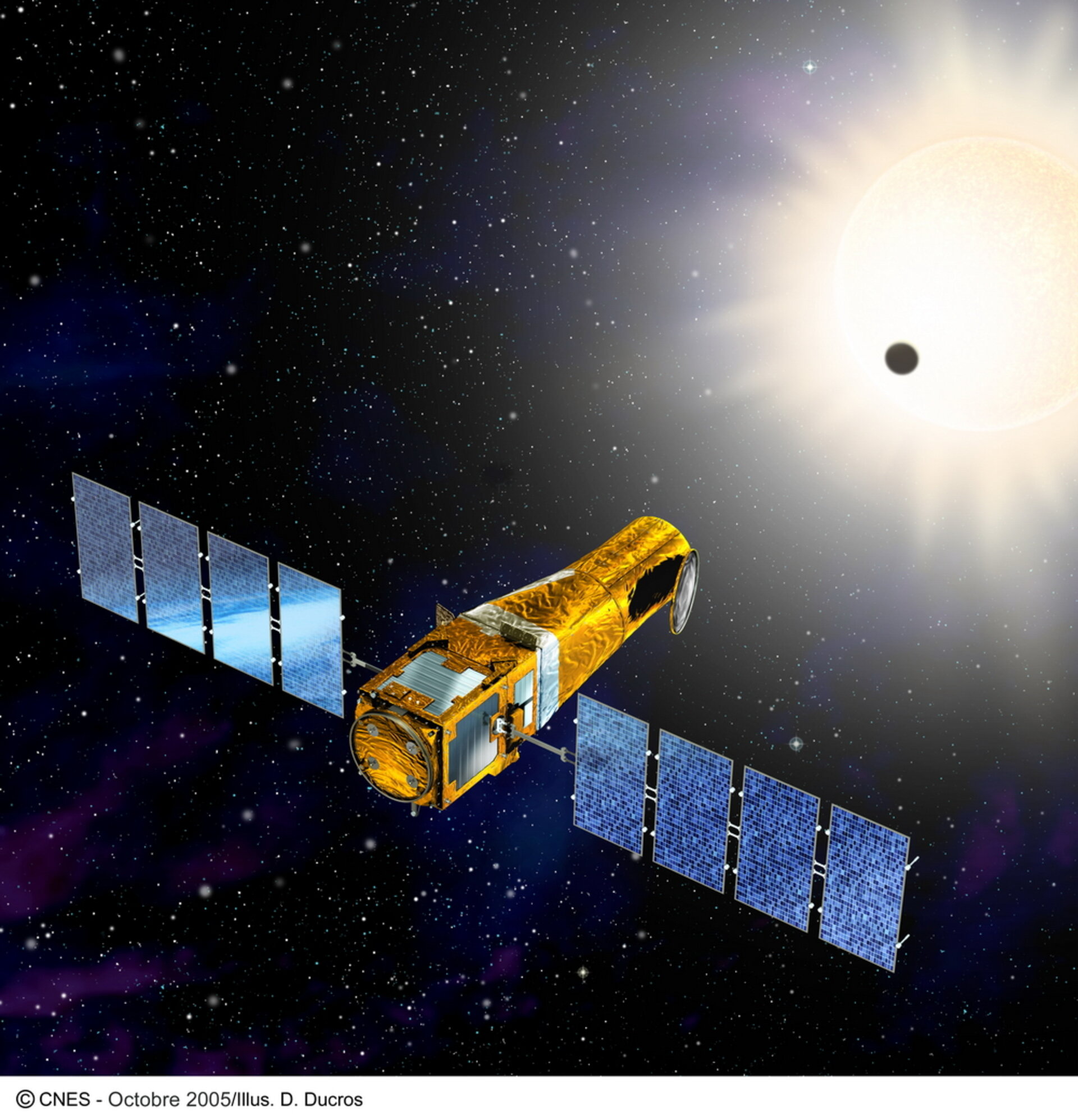 The COROT space telescope is proceeding smoothly towards its launch in December 2006. Once in orbit, COROT will become the first spacecraft devoted to the search for rocky planets, similar to our own Earth.

COROT will also delve into the centres of hundreds or even thousands of stars.

COROT will lead a bold new search for planets around other stars. In the decade since the discovery of the first exoplanet, 51 Pegasi b in 1995, more than 200 other planets have been detected from ground-based observatories. COROT promises to find many more during its two-and-a-half-year mission, and to expand the frontiers of our knowledge toward ever smaller planets. It will look for the tiny drop in light caused by a planet as it slips across the face of its parent star.

Most of the planets COROT will detect are expected to be 'hot-Jupiters'. Each hot Jupiter is a large gas giant planet in close orbit around its central star. An unknown percentage of the planets detected by COROT are expected to be rocky worlds, maybe just a few times larger than the Earth (or even smaller). If COROT finds these worlds, they will represent a new class of planet. "COROT will provide the first mapping of rocky planets around other stars," says Malcolm Fridlund, ESA’s Project Scientist for COROT.

Of the rocky worlds, COROT is most sensitive to those with orbits of 50 days or less. That would place them closer to their parent star than Mercury is to the Sun. In most cases, such proximity to a star would scorch them beyond habitability. However, if such a world were discovered around a red dwarf star, it could be placed at exactly the right distance for liquid water to exist on its surface.

Led by the French national space agency, CNES, COROT is a mission of international collaboration: other partners are Austria, Spain, Germany, Belgium and Brazil. ESA plays a crucial role in the mission. Its Research and Scientific Support Department designed, built and tested COROT's two on-board data processing units. In addition, ESA provided the optics for the telescope, which sits at the heart of the spacecraft.

ESA also tested the telescope at its ESTEC facilities in The Netherlands. The telescope itself contains a primary mirror of 30 centimetres in diameter. During the mission, it will collect the light from thousands of stars and feed it into a special two-part camera.

One half of the camera is designed to look for planets; the other half is optimised to detect the subtle variation in a star’s light, caused by sound waves rippling across the surface. These waves are the equivalent of seismic waves on the Earth.

By studying them, astronomers can gain a detailed insight into the internal conditions of the star. The technique is known as asteroseismology. ESA’s Solar and Heliospheric Observatory (SOHO) has been pioneering similar investigations of the Sun for many years. It has proved to be an extremely successful way to probe the internal conditions of a star and astronomers are eager to extend the technique to other stars.

COROT will target at least fifty specific stars for a detailed study in this way. By choosing stars of different sizes and behaviour, COROT will supply astronomers with the most complete picture of stellar evolution to date. "Stellar physics is not a 'done deal'. In fact, we are really just beginning with it," says Fridlund.

COROT stands for 'Convection Rotation and planetary Transits'. The name describes the scientific goals of the mission with convection and rotation referring to the asteroseismology. Both goals require the camera to be sensitive to changes in a star's light of just one part in one hundred thousand. To help reach this sensitivity, a design team at ESA came up with a highly successful baffle that traps any stray light from entering the telescope.

To further help the accuracy of the COROT data, ESA plan to use its ground station on Tenerife to make follow-up observations. For 30 nights during the next year, its telescope there will target the regions of sky that COROT studies. It will look for contaminating sources of light and variable stars that might fool the COROT observations.

The launch of COROT opens an exciting new chapter in the quest for planets around other stars. "ESA has been working for a long time towards the detection of Earth-like worlds around other stars. COROT is an important first step in this direction and helps to pave the way for ESA's future flagship mission, Darwin, dedicated to the direct detection of Earth-like worlds and their atmospheres to search for signs of life." says Sergio Volonte, Head of the Science Planning and Community Coordination Office at ESA.