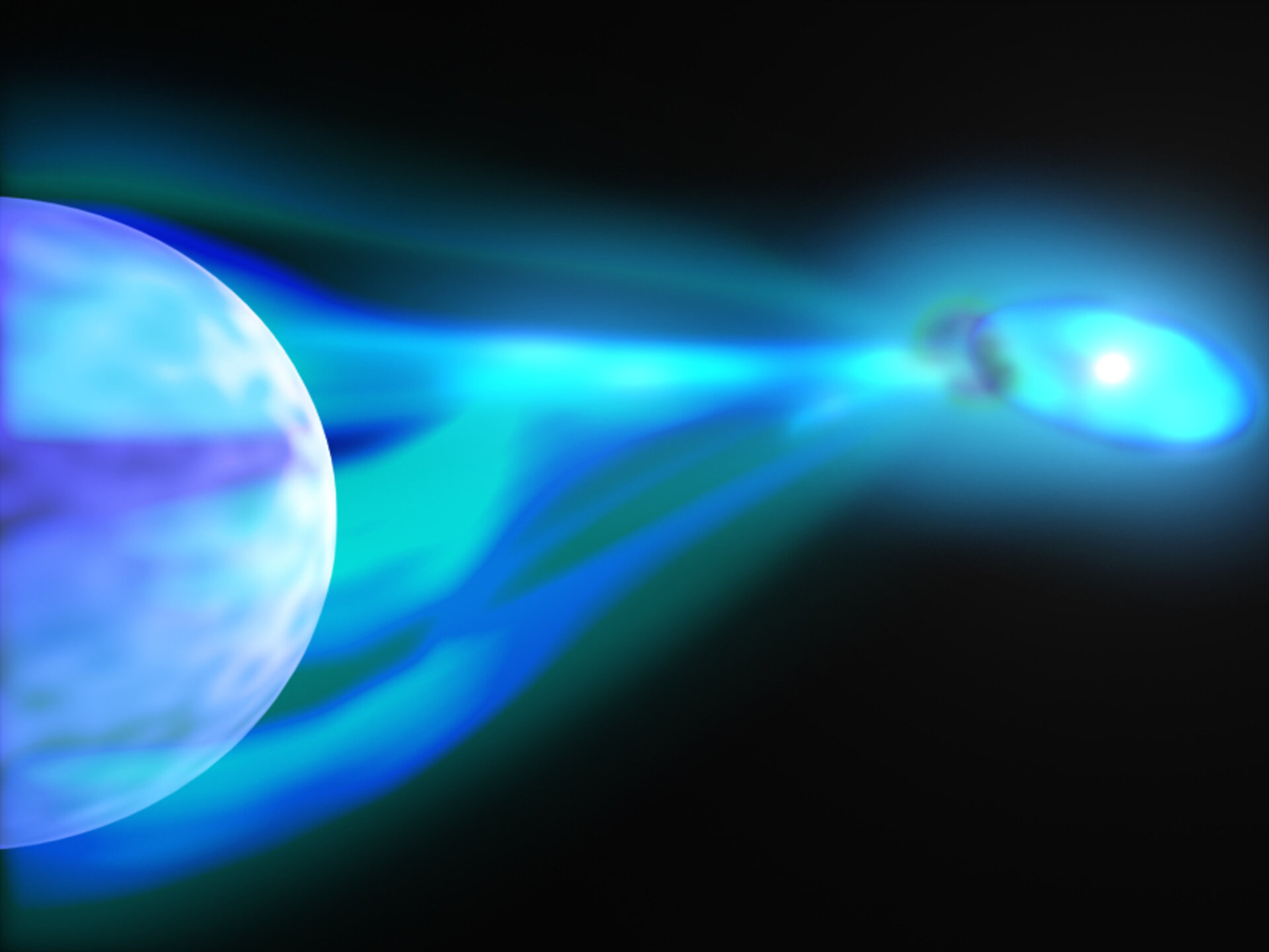 ESA’s XMM-Newton has seen vast clouds of superheated gas, whirling around miniature stars and escaping from being devoured by the stars’ enormous gravitational fields - giving a new insight into the eating habits of the galaxy’s ‘cannibal’ stars.

The clouds of gas range in size from a few hundred thousand kilometres to a few million kilometres, ten to one hundred times larger than the Earth. They are composed of iron vapour and other chemicals at temperatures of many millions of degrees.

"This gas is extremely hot, much hotter than the outer atmosphere of the Sun," said Maria Díaz Trigo of ESA’s European Science and Technology Research Centre (ESTEC), who led the research.

ESA’s XMM-Newton x-ray observatory made the discovery when it observed six so-called ‘low-mass X-ray binary’ stars (LMXBs). The LMXBs are pairs of stars in which one is the tiny core of a dead star.

Measuring just 15–20 kilometres across and comparable in size to an asteroid, each dead star is a tightly packed mass of neutrons containing more than 1.4 times the mass of the Sun.

Its extreme density generates a powerful gravitational field that rips gas from its ‘living’ companion star. The gas spirals around the neutron star, forming a disc, before being sucked down and crushed onto its surface, a process known as ‘accretion’.

The newly discovered clouds sit where the river of matter from the companion star strikes the disc. The extreme temperatures have ripped almost all of the electrons from the iron atoms, leaving them carrying extreme electrical charges. This process is known as ‘ionisation’.

The discovery solves a puzzle that has dogged astronomers for several decades. Certain LMXBs appear to blink on and off at X-ray wavelengths. These are ‘edge-on’ systems, in which the orbit of each gaseous disc lines up with Earth.

In previous attempts to simulate the blinking, clouds of low-temperature gas were postulated to be orbiting the neutron star, periodically blocking the X-rays. However, these models never reproduced the observed behaviour well enough.

XMM-Newton solves this by revealing the ionised iron. "It means that these clouds are much hotter than we anticipated," said Díaz. With high-temperature clouds, the computer models now simulate much better the dipping behaviour.

Some 100 known LMXBs populate our galaxy, the Milky Way. Each one is a stellar furnace, pumping X-rays into space. They represent a small-scale model of the accretion thought to be taking place in the very heart of some galaxies. One in every ten galaxies shows some kind of intense activity at its centre.

This activity is thought to be coming from a gigantic black hole, pulling stars to pieces and devouring their remains. Being much closer to Earth, the LMXBs are easier to study than the active galaxies.

"Accretion processes are still not well understood. The more we understand about the LMXBs, the more useful they will be as analogues to help us understand the active galactic nuclei," says Díaz.