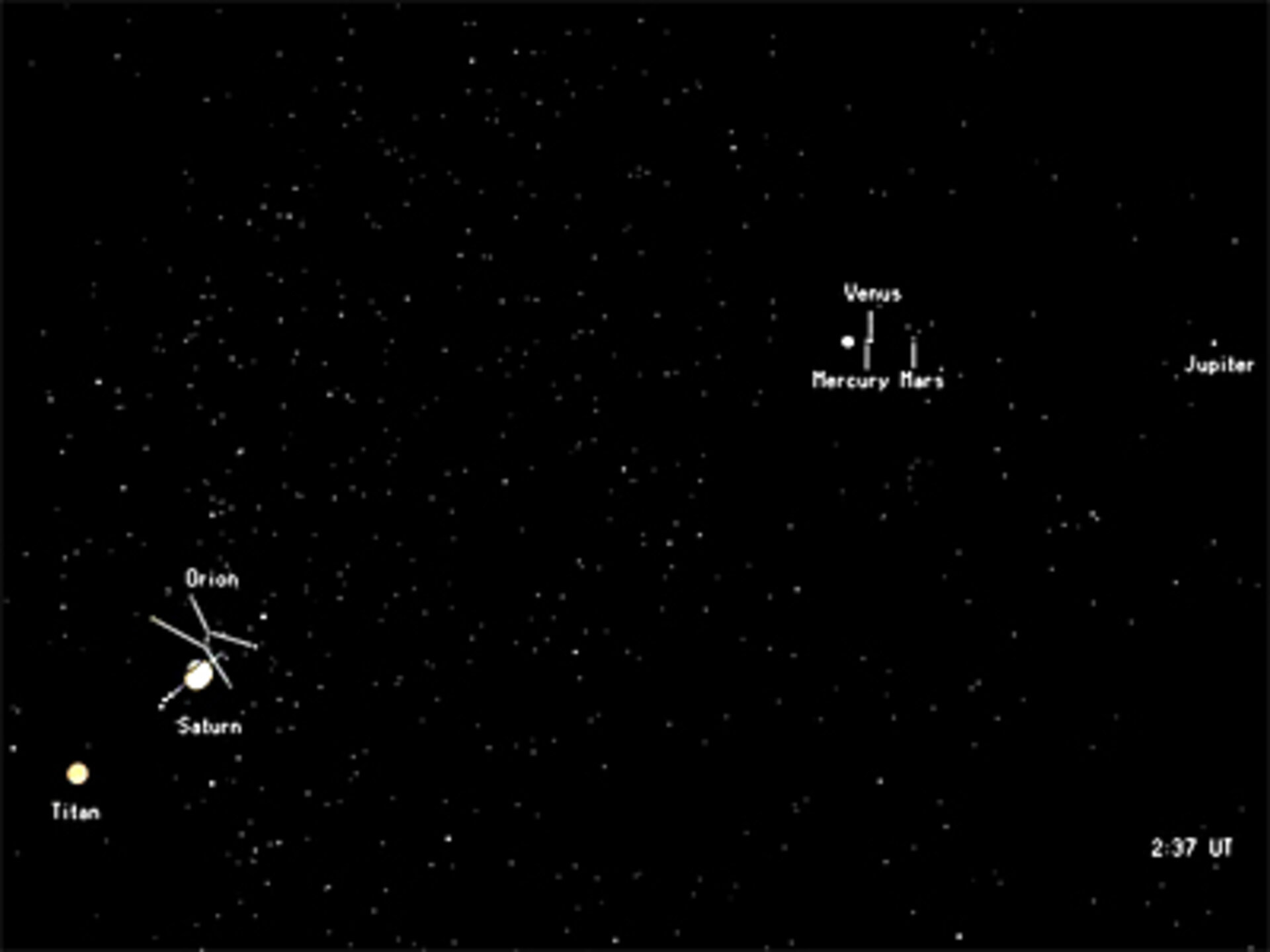 This animation is based on and uses images taken by the Descent Imager/Spectral Radiometer instrument on ESA’s Huygens probe on 14 January 2005.

It starts with the view from Huygens to the Sun in the early hours of 14 January 2005. The Earth and Moon transit across the Sun, which occurs about once every 15 years, while a central transit like this one occurs only twice per millennium.

An observer at Saturn would need a telescope with at least 30 times magnification to see the Earth as a black spot on the solar disk. This solar image was taken on 14 January 2005 and is used courtesy of Mees Solar Observatory, University of Hawaii.

The second scene zooms out to a wide-angle view with the inner planets close to the Sun (to the right) and the Saturnian system at far left. Saturn is almost as large as the constellation Orion, surrounded by the winter constellations.

A few satellites appear as white dots aligned with Saturn's rings, while Saturn's largest satellite, Titan, is already well resolved. The motion of Saturn and its satellites among the stars is calculated based on the orbit of Huygens.

For the third scene, the altitude above Titan's surface and speed relative to the moon are given at the bottom right. At 4:41 UT, the Huygens probe gets its wake-up call. At 6:51, the support avionics are also powered, ready for the entry into Titan's atmosphere. Shortly after 9:00, the probe enters Titan's atmosphere, as the heat shield reduces the speed some 15-fold within a few minutes.

At 9:10, the main parachute reduces the speed further. Fifteen minutes later, the stabiliser allows a faster descent at first, but slowing as Huygens enters the lower, denser parts of Titan's atmosphere. The bright area near the centre top is the bright part of Titan's haze below the Sun.

All the features shown here were imaged by the DISR cameras during the descent. While the original images were black and white, they are ‘colorised’ here based on the spectral data acquired by the DISR spectrometers. As Huygens lands, the view is to the southern horizon with ice rocks visible below. As the view moves down, nearby rocks of some 20 cm size come into sight.

For Huygens, the day of 14 January 2005 started with Titan as a small disk in the night sky. By noon, centimetre-size pebbles lay in front of Huygens. Finally, Cassini received the last signal from Huygens at 12:50.