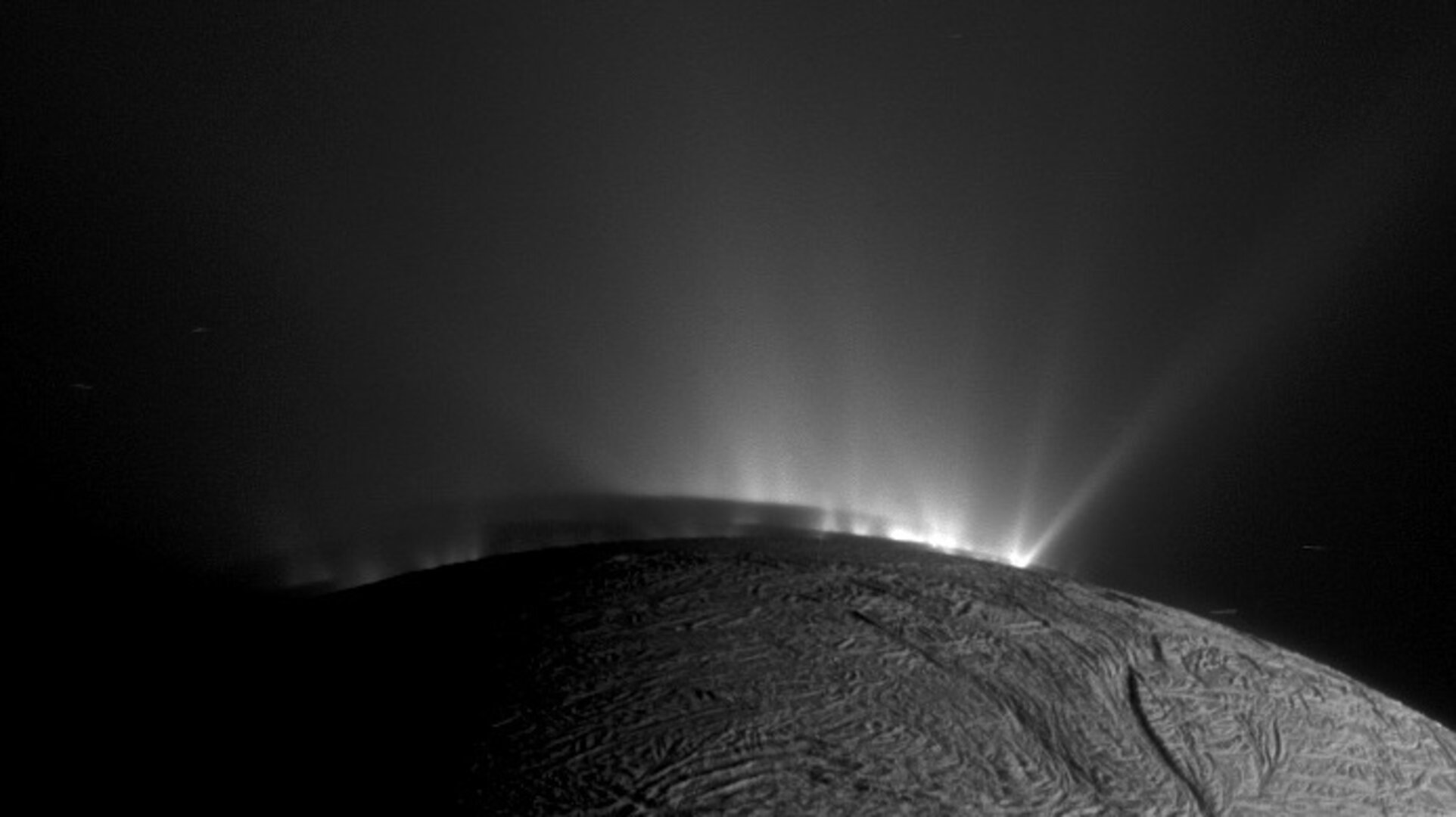 Very little was known about Enceladus prior to 2005 – the year when Cassini first flew close. Since then, it has become a continuous source of surprises, with secrets still being revealed even now, after the mission end.

During the spacecraft's incredible career, scientists discovered that 500 km–diameter Enceladus has a massive sub-surface ocean hidden underneath a thick icy crust, with evidence pointing to powerful hydrothermal vents on the seabed that mix up material from the moon’s water-filled, porous core with the ocean water.

They detected mighty geysers releasing a mixture of water vapour and ice grains from the oceans into space through cracks – nicknamed ‘tiger stripes’ – in the moon’s icy shell, providing material for one of Saturn’s rings.

Now, a team led by Frank Postberg and Nozair Khawaja of the University of Heidelberg, Germany, has identified fragments of large organic molecules in these ejected ice grains. The results are published today in Nature.

“It is the first ever detection of complex organics coming from an extraterrestrial water-world,” says Frank.

The fragments, of up to 200 units of molecular mass, are created as the ice grains hit the dust-analysing instrument on Cassini at speeds of about 30 000 kilometres per hour, but the researchers believe that, prior to the collision, the grains contain the original, even larger molecules, which could have molecular weights of thousands of atomic mass units.

Scientists calculate molecular mass, or weight, as the sum of weights of individual atoms contained in the molecule. Previously, Cassini had only detected lightweight organic molecules at Enceladus that were much smaller than the most recently found fragments.

Such large molecules can only be created by complex chemical processes – including those related to life. Alternatively, they could come from primordial material as found in some meteorites or, more likely, be generated by hydrothermal activity.

“In my opinion the fragments we found are of hydrothermal origin, having been processed inside the hydrothermally active core of Enceladus: in the high pressures and warm temperatures we expect there, it is possible that complex organic molecules can arise,” says Frank.

Recent simulations show that enough heat to power hydrothermal activity for tens of millions of years could be generated through tidal friction if the moon has a porous core with ocean water percolating through it.

Following up on this scenario, the organic material is injected into the ocean by hydrothermal vents on the floor of Enceladus’ ocean – something akin to the hydrothermal sites found at the bottom of the oceans on Earth, which are one of the possible environments that scientists investigate for the emergence of life on our own planet.

In Earth’s oceans, organic substances from deeper waters can accumulate efficiently on the walls of rising air bubbles, transporting them to the surface where they are dispersed along with sea spray when the bubble bursts.

Scientists think a similar process could be happening on Enceladus. Bubbles of gas, rising through tens of kilometres of ocean, could bring up organic material from depth where they form a thin film floating on the ocean surface beneath the icy shell.

This is the most recent in a long series of discoveries made by Cassini that have been painting Enceladus as a potentially habitable water-world.

With Cassini data alone, however, it is not possible to confirm the exact origin of the newly found organics from which the observed fragments derive, as the size of the fragments is at the maximum limit that could be detected by the instruments.

“If we could visit Enceladus again, we would take instruments that can see the entire molecules, not just these fragments, and that would tell us exactly what they are and how they have been created,” says Frank.

“It seems that this mysterious moon will keep this secret for some time, but it is in the reach of a future mission to Enceladus to solve this part of the puzzle,” adds Nozair.

The Cassini revelations will also have important implications for ESA’s upcoming JUpiter ICy moons Explorer, Juice, which is planned for launch in 2022, with an arrival at the Jupiter system in 2029.

Similar to Saturn, Jupiter has a complex system of natural satellites, with three of the largest – Europa, Ganymede and Callisto – thought to have an underground ocean.

“Thanks to the Cassini experience, we will know what to look for and how to study it in the Jupiter system,” says Nicolas Altobelli, ESA Cassini project scientist who is also responsible for the development of Juice science operations at ESA.

“Juice will continue the exploration of potentially habitable worlds, investigating the conditions where life could have emerged in our Solar System.”

"Macromolecular organic compounds from the depths of Enceladus" by F. Postberg et al, is published in Nature.

The study was conducted with data from two mass spectrometers aboard the Cassini spacecraft: the Cosmic Dust Analyzer (CDA) and the Ion and Neutral Mass Spectrometer (INMS).