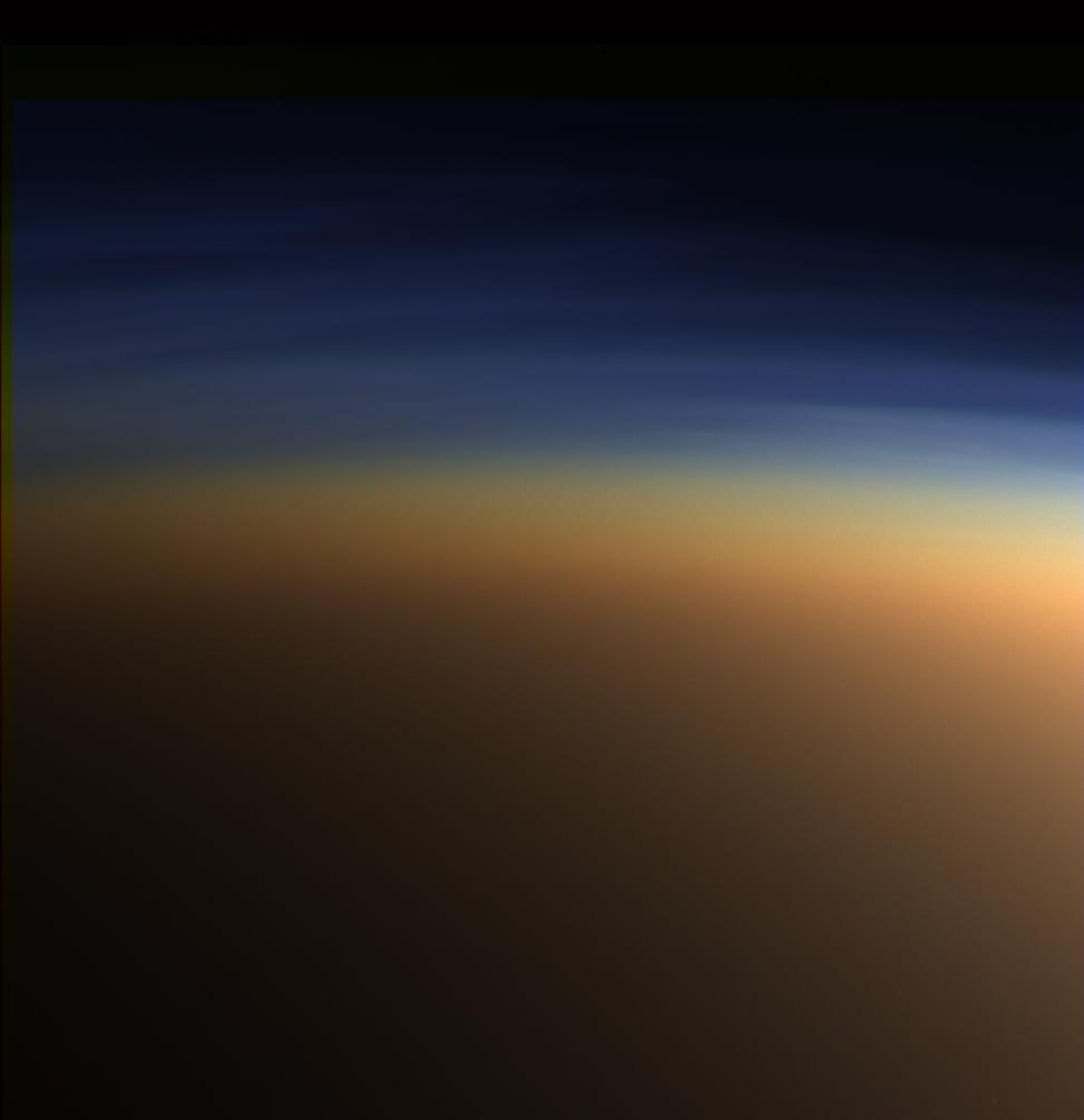 Planetary scientists are a step closer to understanding the composition of the dust in Titan’s atmosphere. A decade-long programme of laboratory studies, aiming to reproduce Titan’s unique dust, or ‘aerosol’ population in specially constructed reactors, has proved invaluable.

Aerosols are small, solid particles that float in the air. On Earth, they are often the result of pollutants in the atmosphere. On Titan, they occur naturally and are abundant in the atmosphere, masking its surface.

To analyse these particles, Huygens heated the samples to 600 °C, in order to vaporize them into volatile fragments. This technique, known as pyrolysis, was performed by the Aerosol Collector and Pyrolyzer (ACP) experiment. The resultant gases were then passed on to the Gas Chromatograph Mass Spectrometer (GCMS) for analysis.

The GCMS results effectively give scientists a list of chemical components from which they can derive the chemical composition of these particles. Scientists then have to work out what their precise chemical makeup is and determine how they formed. In anticipation ten years ago, a team of French scientists started making their own laboratory analogues, called ‘tholins’, for comparison.

Tholins are complex nitrogen-rich substances that form in the laboratory when ultraviolet radiation or electrons react with simpler molecules such as methane and ethane in a surrounding atmosphere of nitrogen. On Titan, the methane and nitrogen-rich atmosphere makes their formation easy and they drift to the surface where they continue to react with other atoms and molecules.

Faced with creating such alien molecules, the French team designed a special reaction chamber to simulate Titan’s atmosphere and produce the tholins for study. “We can generate over 200 chemical species,” says Patrice Coll, a team member at Laboratoire Interuniversitaire des Systèmes Atmosphériques (LISA), Paris, “We do not yet know the detailed pathways that build the chemicals, but we believe that are very similar to those on Titan.”

The aerosols govern what you can see on Titan. They create Titan’s hazy conditions, revealed by Huygens, and give the moon its dull orange glow. If you could stand on the surface of Titan and magically tune your eyes to infrared light, the haze and the clouds would seem to disappear and Saturn would loom large in the night sky. This is because the aerosols are largely invisible at infrared wavelengths. Change your eyes to ultraviolet, however, and you would be plunged into darkness because, at these wavelengths, the tholins behaves like a thick fog that absorbs all ultraviolet radiation falling on it.

The team’s work has already solved one mystery in the data from Huygens by showing that the aerosols must contain ammonia-like structures, even if there was little or no ammonia in the atmosphere from which the particle was built. The team reached this conclusion by analysing the products of the pyrolysis and the ratio of carbon isotopes in their laboratory tholins.

Carbon, in common with many elements, can exist in a number of different isotopes. Isotopes contain different numbers of electrically neutral particles in the atomic nucleus and thus have different weights. An atom’s weight influences how easily it reacts with other atoms. Usually light isotopes react faster and build up into molecules faster than their heavier cousins. Mai-Julie Nguyen, a team member at LISA, analyzed the carbon isotopic ratio in the laboratory tholins and, surprisingly, did not find them to be enriched in the lighter isotope of carbon, in spite of their chemical complexity.

The team then used these new results to interpret the ACP - GCMS data from Huygens. They discovered that the material collected by ACP in Titan’s atmosphere releases ammonia when heated to 600 °C. This gives essential information on the elemental and molecular composition of Titan’s aerosols.

The task of analysing the data from GCMS continues. “This latest paper shows that to correctly interpret these results, we must have clear information about the complexity of the aerosols,” says Francois Raulin, Huygens Interdisciplinary Scientist, at Laboratoire de Physique et Chimie de l'Environnement, Paris.

This article is based on two papers that will appear in a special issue of the Planetary and Space Science magazine dedicated to Huygens results: ‘Carbon isotopic enrichment in Titan’s tholins? Implications for Titan’s aerosols’, by M. Nguyen et al., and ‘A technique to determine the mean molecular mass of a planetary atmosphere using pressure and temperature measurements made by an entry probe: demonstrating using Huygens data’, by P. Withers.

Cassini-Huygens is a joint mission between NASA, ESA and the Italian Space Agency (ASI).