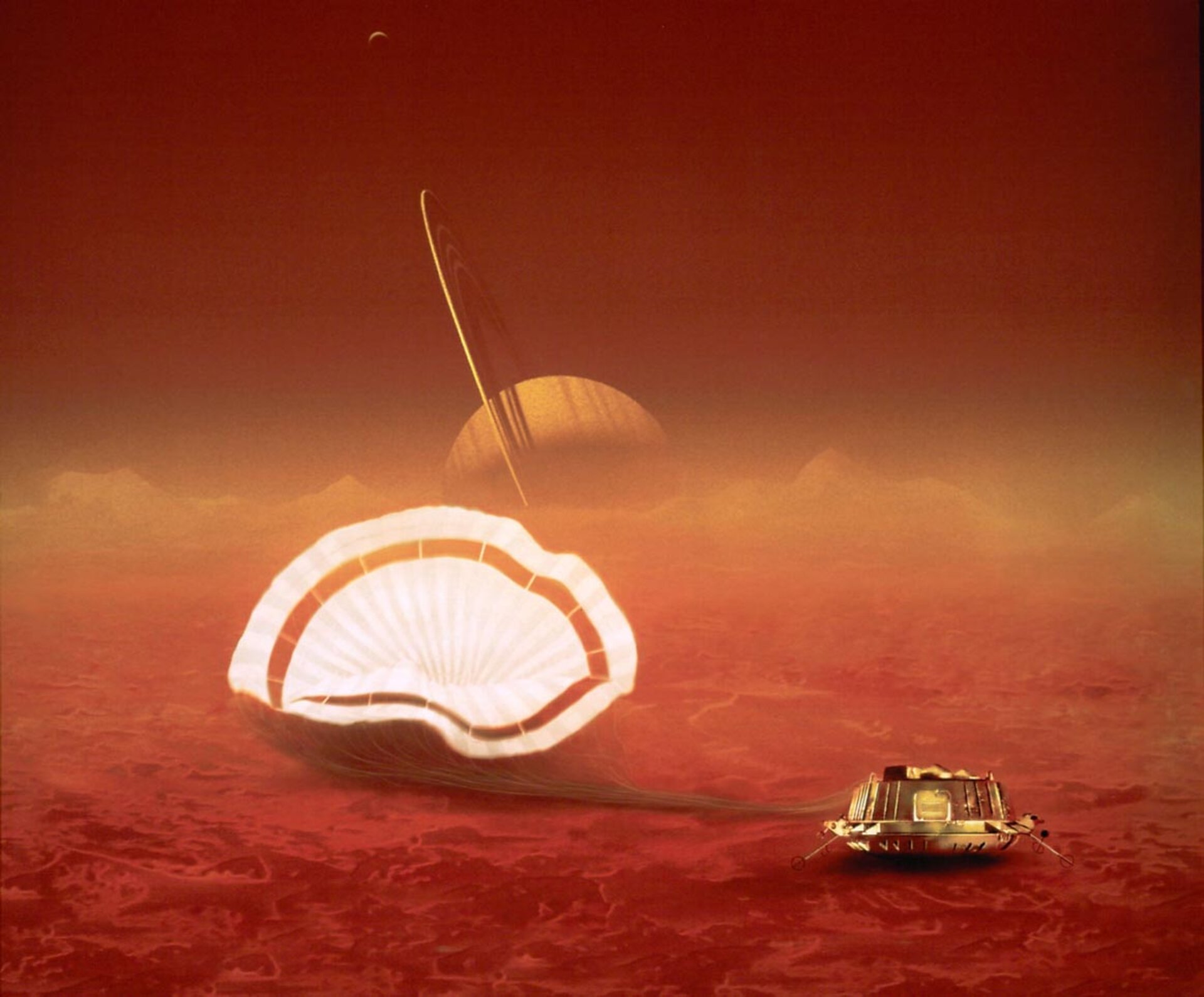 ESA PR 03-2005. Today, after its seven-year journey through the Solar System on board the Cassini spacecraft, ESA’s Huygens probe has successfully descended through the atmosphere of Titan, Saturn’s largest moon, and safely landed on its surface.

The first scientific data arrived at the European Space Operations Centre (ESOC) in Darmstadt, Germany, this afternoon at 17:19 CET. Huygens is mankind’s first successful attempt to land a probe on another world in the outer Solar System. “This is a great achievement for Europe and its US partners in this ambitious international endeavour to explore the Saturnian system,” said Jean-Jacques Dordain, ESA’s Director General.

Following its release from the Cassini mothership on 25 December, Huygens reached Titan’s outer atmosphere after 20 days and a 4 million km cruise. The probe started its descent through Titan’s hazy cloud layers from an altitude of about 1270 km at 11:13 CET. During the following three minutes Huygens had to decelerate from 18 000 to 1400 km per hour.

A sequence of parachutes then slowed it down to less than 300 km per hour. At a height of about 160 km the probe’s scientific instruments were exposed to Titan’s atmosphere. At about 120 km, the main parachute was replaced by a smaller one to complete the descent, with an expected touchdown at 13:34 CET. Preliminary data indicate that the probe landed safely, likely on a solid surface.

The probe began transmitting data to Cassini four minutes into its descent and continued to transmit data after landing at least as long as Cassini was above Titan’s horizon. The certainty that Huygens was alive came already at 11:25 CET today, when the Green Bank radio telescope in West Virginia, USA, picked up a faint but unmistakable radio signal from the probe. Radio telescopes on Earth continued to receive this signal well past the expected lifetime of Huygens.

Huygens data, relayed by Cassini, were picked up by NASA’s Deep Space Network and delivered immediately to ESA’s European Space Operation Centre in Darmstadt, Germany, where the scientific analysis is currently taking place.

“Titan was always the target in the Saturn system where the need for ‘ground truth’ from a probe was critical. It is a fascinating world and we are now eagerly awaiting the scientific results,” says Professor David Southwood, Director of ESA’s scientific programmme.

“The Huygens scientists are all delighted. This was worth the long wait,” says Dr Jean-Pierre Lebreton, ESA Huygens Mission Manager. Huygens is expected to provide the first direct and detailed sampling of Titan’s atmospheric chemistry and the first photographs of its hidden surface, and will supply a detailed ‘weather report’.

One of the main reasons for sending Huygens to Titan is that its nitrogen atmosphere, rich in methane, and its surface may contain many chemicals of the kind that existed on the young Earth. Combined with the Cassini observations, Huygens will afford an unprecedented view of Saturn’s mysterious moon.

“Descending through Titan was a once-in-a-lifetime opportunity and today’s achievement proves that our partnership with ESA was an excellent one,” says Alphonso Diaz, NASA Associate Administrator of Science.

The Cassini-Huygens mission is a cooperation between NASA, the European Space Agency and ASI, the Italian space agency. The Jet Propulsion Laboratory (JPL), a division of the California Institute of Technology in Pasadena, is managing the mission for NASA’s Office of Space Science, Washington. JPL designed, developed and assembled the Cassini orbiter.

“The teamwork in Europe and the USA, between scientists, industry and agencies has been extraordinary and has set the foundation for today’s enormous success,” concludes Jean-Jacques Dordain.