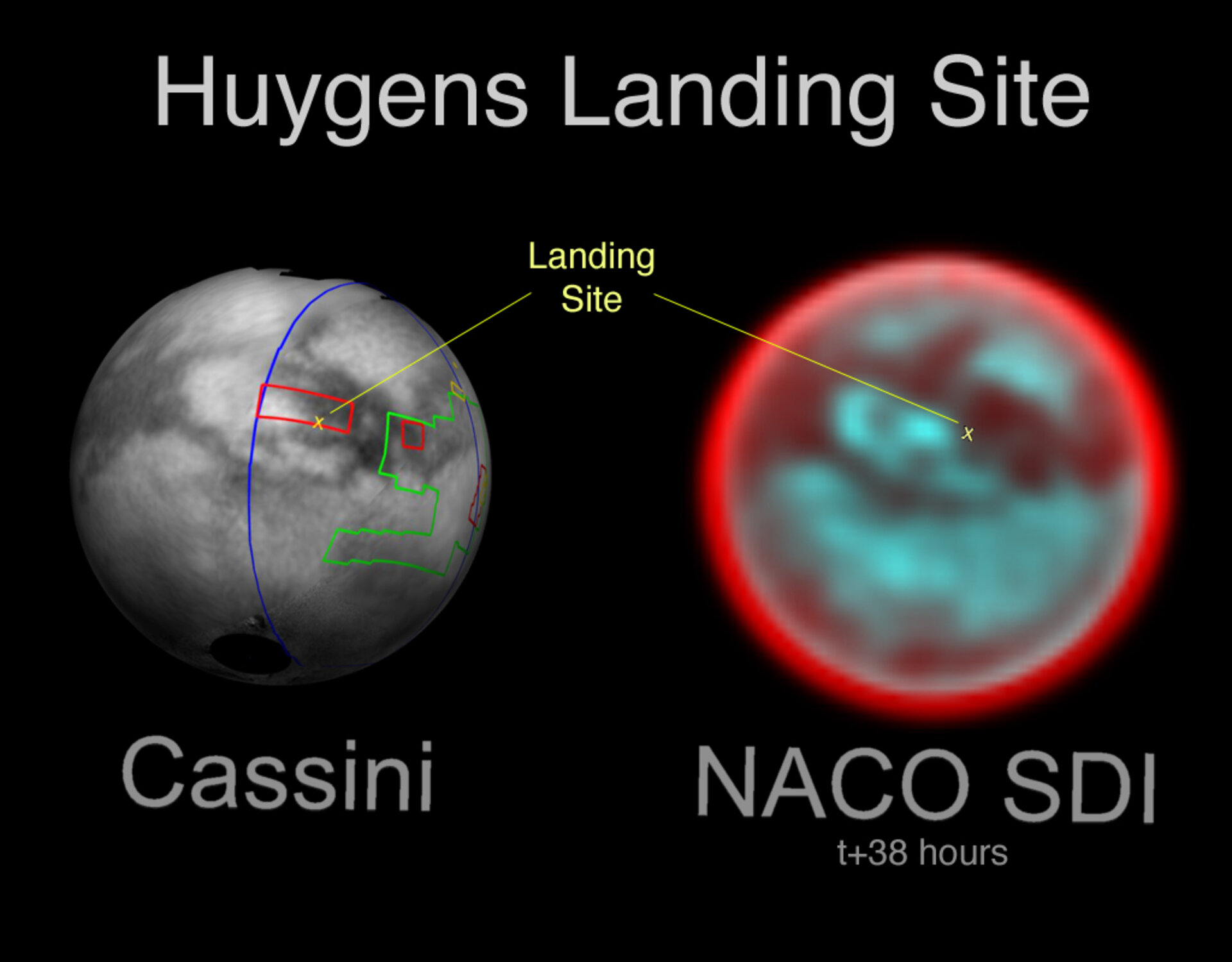 ESA PR 13-2007. As of 14 March, an epic space mission and one of the founding fathers of the European space endeavour will be forever linked.

ESA, the international Committee for Space Research (COSPAR) and NASA have decided to honour Professor Hubert Curien’s contribution to European space by naming the Huygens landing site on Saturn’s largest moon, Titan, after him.

The naming ceremony for the Huygens landing site, which will be known as the "Hubert Curien Memorial Station", will be held at ESA’s Headquarters on 14 March, in the presence of ESA Council delegates and of Professor Curien’s wife, Mrs Perrine Curien, and one of their sons. Media interested in attending are invited to submit the reply form below.

Huygens' landing on Saturn’s largest moon in January 2005 represented one of the greatest successes achieved by humankind in the history of space exploration. The part played by ESA, in cooperation with NASA and the Italian Space Agency (ASI), was made possible thanks to the commitment of a man who, for several decades, worked to promote and strengthen the role of scientific research in his home country - France - and in Europe. Among his numerous responsibilities, Hubert Curien was French Minister of Research and Space under four Prime Ministers.

As Chairman of the ESA Council from 1981 to 1984, Professor Curien played a crucial part in setting up ESA's former long-term science programme, "Horizon 2000", which included the Huygens mission among its projects.

Professor Roger Bonnet, current President of COSPAR, and former ESA Director of Science (1983-2001), commented: "Curien’s diplomatic skills were hugely influential in bringing about the birth of European space science. In 1985, his support was pivotal when the European ministers had to decide how to build a solid space science programme and ensure that it would be financially sustainable in the long term."

"ESA's present science programme, Cosmic Vision, draws on the heritage left by Hubert Curien", said Professor David Southwood, ESA's current Director of Science. "He encouraged cooperation between nations in the belief that space research is fundamental to the progress and welfare of a knowledge-based society like ours. He also promoted the concept of long-term planning", he continued. "It would seem almost inconceivable today to initiate any space venture without such pillar concepts in mind".

"The role played by Hubert Curien in creating a European space dimension, with all its various facets, has been absolutely essential", said Jean-Jacques Dordain, ESA Director General. "Curien was one of the fathers of the Ariane Programme, which provided Europe with independent access to space, and one of those who, in the late seventies, persuaded other countries to join ESA by creating the 'fair return' system for industrial contracts." Dordain continued, "This exceptional man of vision was appreciated by all for his scientific competence and his outstanding human, political and diplomatic abilities. It is therefore a true honour for us to pay tribute to his memory by linking his name forever to this very significant place on the surface of an alien world that, also thanks to him, we were able to reach."

Hubert Curien was born on 30 October 1924 in the Vosges region of eastern France. While a student, he enlisted in the French resistance and was commended for bravery in action. He entered the Ecole Normale Supérieure in Paris and went on to pursue a research career in crystallography, joining the Sorbonne Mineralogy Laboratory. He was always keen to encourage collaboration between mineralogists and physicists. He was appointed lecturer at the University of Paris in 1949, obtained his PhD in 1951, and became professeur in 1956. From 1968 onwards, he continued with his teaching career at the 'Pierre et Marie Curie/Paris VI' University, which he left only in 1994, despite all his political duties.

Aside from his scientific career, Hubert Curien is known mostly for his managerial and political responsibilities, pursued with commitment, efficiency and vision both in France and in Europe. He left his mark on an impressive number of scientific institutions. From 1966 to 1969, he was Scientific Director for Physics at the CNRS, France's scientific research centre, becoming its Director General in 1969. In 1973, he was given responsibility for reorganising research in France. From 1976 to 1984, he was President of the French space agency (CNES), and from 1984 to1993, served as Minister of Research and Space under four different governments.

From 1981 to 1984, he was Chairman of the ESA Council, and he is now still remembered – among his many achievements – as one of the fathers of the Ariane programme and as a promoter of a Europe united through science. From 1994 to 1996, he also headed the European Organization for Nuclear Research (CERN), and in 1993, was elected to the French Academy of Science.

For his work, Hubert Curien received the highest distinctions and awards. He was known for his great intelligence and managerial and political abilities, but also for his simplicity, modesty, sense of humour and willingness to listen to others. He died on 6 February 2005, and is survived by his wife, Perrine, and their sons, Nicolas, Christophe and Pierre-Louis.

The European-built Huygens probe was part of the Cassini-Huygens mission to Saturn - a joint endeavour of ESA, NASA and the Italian Space Agency (ASI). It is the most ambitious effort in planetary space exploration ever mounted. Launched on 15 October 1997, Cassini (a sophisticated robotic spacecraft designed to orbit the ringed planet and study the Saturnian system in detail), bearing the Huygens probe, reached Saturn on 1 July 2004. Cassini delivered Huygens to Saturn’s largest moon, Titan, on 14 January 2005. This was the first ever descent and landing onto a celestial body in the outer Solar System, and it provided the most spectacular view of Titan yet.

During its 2½-hour descent onto this alien world, Huygens performed a series of measurements by means of its highly advanced suite of six instruments. It detected information about Titan’s atmosphere and winds. It also took remarkable pictures of the approaching surface, up to touchdown, which took place in Titanian 'mud', where, amazingly, it continued to take measurements for more than 3 hours.

Now, thanks to the Huygens measurements and also to the complementary, global measurements made by Cassini, we actually know that Titan’s landscapes truly resemble those on Earth, with mountains, lakes, shorelines and outflow channels, where methane plays a role similar to that of water on Earth. By detecting Argon 40, Huygens also helped to reveal that the interior of Titan is still active, as confirmed later by Cassini, which observed icy 'lava' flows emerging from 'cryo-volcanoes'.

The Cassini-Huygens results so far tell us that Titan, once thought to resemble an early, frozen Earth, in reality appears to be as complex as any of the terrestrial planets that have an atmosphere. Huygens has exceeded expectations and shown Titan to be an 'alien earth', probably more similar to our own planet than either Mars or Venus, and is enabling planetary scientists to explore a new, fascinating world.