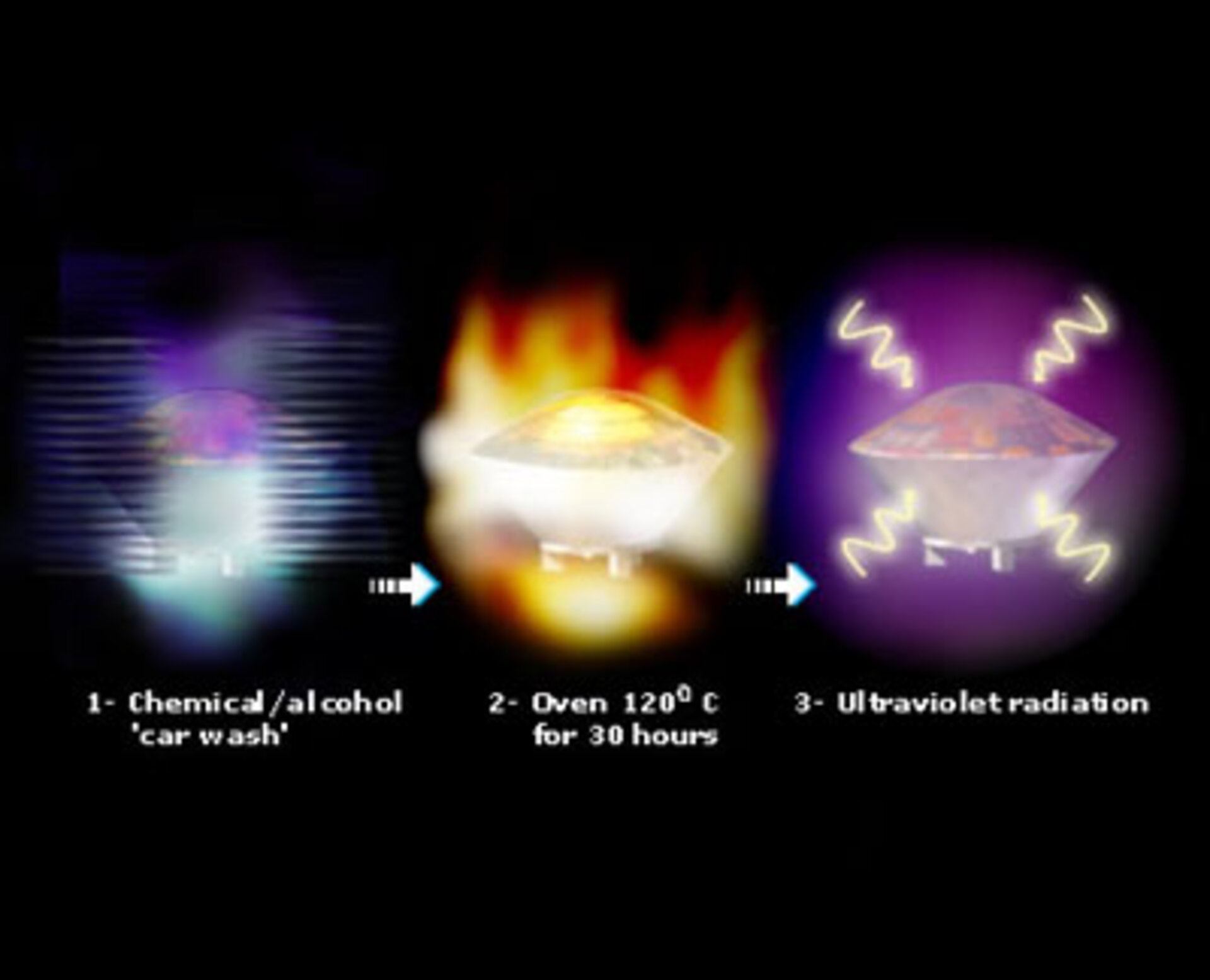 When packing for a trip towards another planet, there are some things, such as microorganisms, that you do not want to include in your 'luggage'. For example, what if extraterrestial life is finally detected on Mars, and scientists realise afterwards that such life is actually terrestrial?

Fortunately, there are strict international rules to avoid the contamination of Solar System bodies with biological material from Earth. Landers, for example, may present a special danger to the objects they set down on. The European Space Agency (ESA) is well aware of this. ESA's missions, such as Mars Express, with its lander Beagle 2, Rosetta, which will land on a comet, and Cassini-Huygens, headed towards Saturn and its moon Titan, will be 'clean' and responsible visitors. The strictest of procedures will ensure that they carry only highly sterilised landers.

Cassini (with Huygens on-board) left Earth in 1997 and is travelling towards the planet Saturn. In 2004, Huygens will separate from the spacecraft and land on its own on Saturn's largest moon, Titan. Titan is a highly promising site for the scientists because its atmosphere very much resembles that of primitive Earth. It is a very cold place, with temperatures down to -180ºC. Many scientists think such freezing temperatures are precisely the reason why life never arose on Titan. However, Huygens may well give them reasons to reconsider.

Rosetta and Mars Express will be launched in 2003. Rosetta is ESA's comet-chaser. It will spend 8 years travelling through the Solar System and in 2011 it will land on Comet 46 P/Wirtanen, making Rosetta the first spacecraft ever to land on a comet. Mars Express is the next mission to Mars and the first European one. It will arrive on the Red Planet in December 2003 and release its lander Beagle 2, whose task, among others, is to search for evidences of Martian life.

These diverse projects all have something in common. They have all had to take into account the 'planetary protection' requirements set by the international scientific organisation, Committee on Space Research (COSPAR).

"We don't want to contaminate the planets we go to," says John Bennett, of ESA's Mars Express team and one of the scientists responsible for 'protecting' the Red Planet from an undesired terrestrial invasion. "We don't want future missions to detect contamination, instead of life."

COSPAR rules determine a spacecraft's degree of cleanliness. Standards vary depending on both the type of mission and its 'destiny'. For example, from a contamination point of view, landers are obviously more 'dangerous' than orbiters. Moreover, the more likely a planet is considered to bear life, the stricter the requirements are.

For these reasons, rules are especially tough for Mars Express's lander, Beagle 2. Scientists set sterilisation criteria of 300 microorganisms per square metre for missions to Mars in the past. At this level, no life was detected and they concluded that this sterilisation level would not compromise or affect biological measurements. Beagle 2 will have to be sterilised to contain less than 300 microorganisms per square metre at launch, and no more than 300 000 inside the whole launcher. By comparison, the floor of even the cleanest kitchen inside a house on Earth has several thousands of millions of microorganisms present.

The sterilisation process is quite complicated. Many of the instruments' components are very delicate and would not withstand very high temperatures, so scientists use different techniques. They will heat most of the components of Beagle 2 to 120ºC and clean other components chemically. For the solar panels, for example, an alcohol will be used. The microelectronics components will be placed in a vacuum chamber with a special gas, hydrogen peroxide plasma, that oxidises biological material, making it harmless. Scientists will also use another sterilising technique, irradiation with ultraviolet light and other kinds of radiation. Sterilisation will affect all parts of the lander, even the airbags and the parachute system the lander uses to reach the ground safely.

For Beagle, the process will take place in several facilities in the United Kingdom. Special transportation systems will take each component to a specially built clean room where they will be assembled on location at the Open University site in the United Kingdom. Assembly will begin this summer. Once finished, the ultraclean Beagle 2 will be 'sealed' within its own front-shield and back-cover, and made ready to be mounted on Mars Express.

Requirements for Rosetta and Huygens are less strict. When Cassini-Huygens was launched in 1997, scientists thought that life was simply too unlikely to exist on the cold Titan. They therefore labelled the project low risk, with no sterilisation procedures considered necessary. However, according to COSPAR rules, the spacecraft was assembled in a clean room, that is, with less than 100 000 particles per unit of volume.

Rosetta is a similar case. "Sterilisation is generally not crucial since comets are usually regarded as objects where you can find prebiotic molecules, that is, molecules that are precursors of life, but not living microorganisms," explains Gerhard Schwehm, Rosetta's Project Scientist. On the other hand, Rosetta has to perform delicate experiments on the comet and scientists do not want the results to be spoiled, so cleanliness is required.