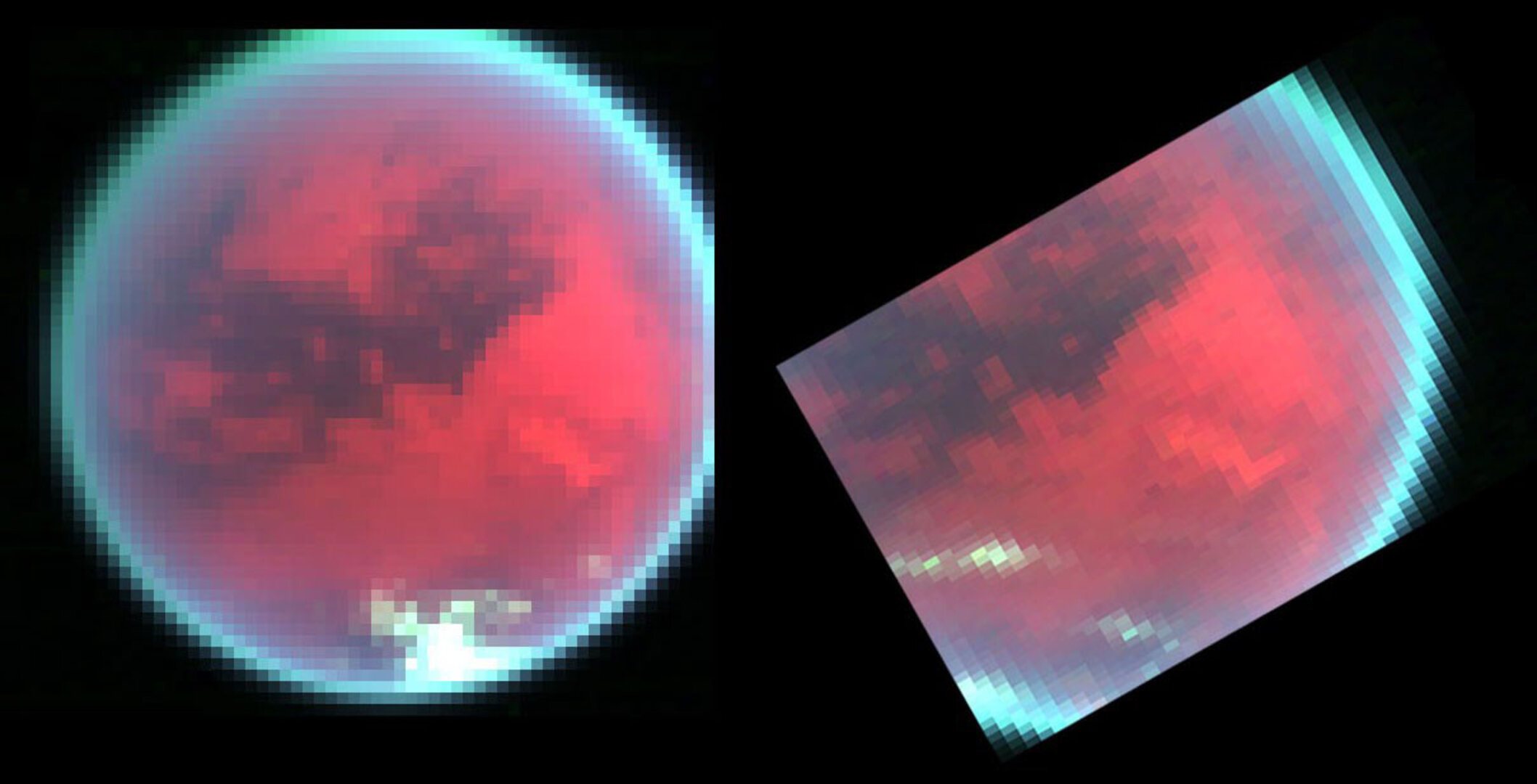 Using recent Cassini, Huygens and Earth-based observations, scientists have been able to create a computer model which explains the formation of several types of ethane and methane clouds on Titan.

Clouds have been observed recently on Titan, Saturn’s largest moon, through the thick haze, using near-infrared spectroscopy and images of the south pole and temperate regions near 40° South. Recent observations from Earth-based telescopes and the NASA/ESA/ASI Cassini spacecraft are now providing an insight into cloud climatology.

A European team, led by Pascal Rannou of the Service d’Aeronomie, IPSL Universite de Versailles-St-Quentin, France, has developed a general circulation model which couples dynamics, haze and cloud physics to study Titan climate and enables us to understand how the major cloud features which are observed, are produced.

This climate model also allows scientists to predict the cloud distribution for the complete Titan year (30 terrestrial years), and especially in the next years of Cassini observations.

The Voyager missions of the early 1980s gave the first indications of condensate clouds on Titan. Because of the cold temperatures in the moon’s atmosphere (tropopause), it was assumed that most of the organic chemicals formed in the upper atmosphere by photochemistry would condense into clouds while sinking. Methane would also condense at high altitudes, it was believed, having been transported from the surface.

Since then, several one-dimensional models of Titan’s atmosphere including sophisticated microphysics models were created to predict the formation of drops of ethane and methane. Similarly, the methane cycle had been studied separately in a circulation model, but without cloud microphysics.

These studies generally found that methane clouds could be triggered when air parcels cooled while moving upward or from equator to pole. However, these models hardly captured the fine details of the methane and ethane cloud cycles.

What Rannou’s team has done is to combine a cloud microphysical model into a general circulation model. The team can now identify and explain the formation of several types of ethane and methane clouds, including the south polar and sporadic clouds in the temperate regions, especially at 40° S in the summer hemisphere.

The scientists found that the predicted physical properties of the clouds in their model matched well with recent observations. Methane clouds that have been observed to date appear in locations where ascending air motions are predicted in their model.

The observed south polar cloud appears at the top of a particular ‘Hadley cell’, or mass of vertically circulating air, exactly where predicted at the south pole at an altitude of around 20-30 kilometres.

The recurrent large zonal (longitudinal direction) clouds at 40° S and the linear and discrete clouds that appear in the lower latitudes are also correlated with the ascending part of similar circulation cell in the troposphere, whereas smaller clouds at low latitudes, similar to the linear and discrete clouds already observed by Cassini are rather produced by mixing processes.

"Clouds in our circulation model are necessarily simplified relative to the real clouds, however the main cloud features predicted find a counterpart in reality.

"Consistently, our model produces clouds at places where clouds are actually observed, but it also predicts clouds that have not, or not yet, been observed," said Pascal Rannou.

Polar clouds - produced by 'polar cells' - are similar to those produced at mid-latitudes on Earth. On other hand, clouds only appears at some longitudes. This is a specific feature of Titan clouds, and may be due to a Saturn tidal effect. The dynamical origin of cloud distribution on Titan is easy to test.

Cloudiness prediction for the coming years will be compared to observations made by Cassini and ground-based telescopes. Specific events will definitely prove the role of the circulation on the cloud distribution.

This article is based on a paper which was published in the January 2006 issue of Science, titled 'The latitudinal distribution of clouds on Titan'.