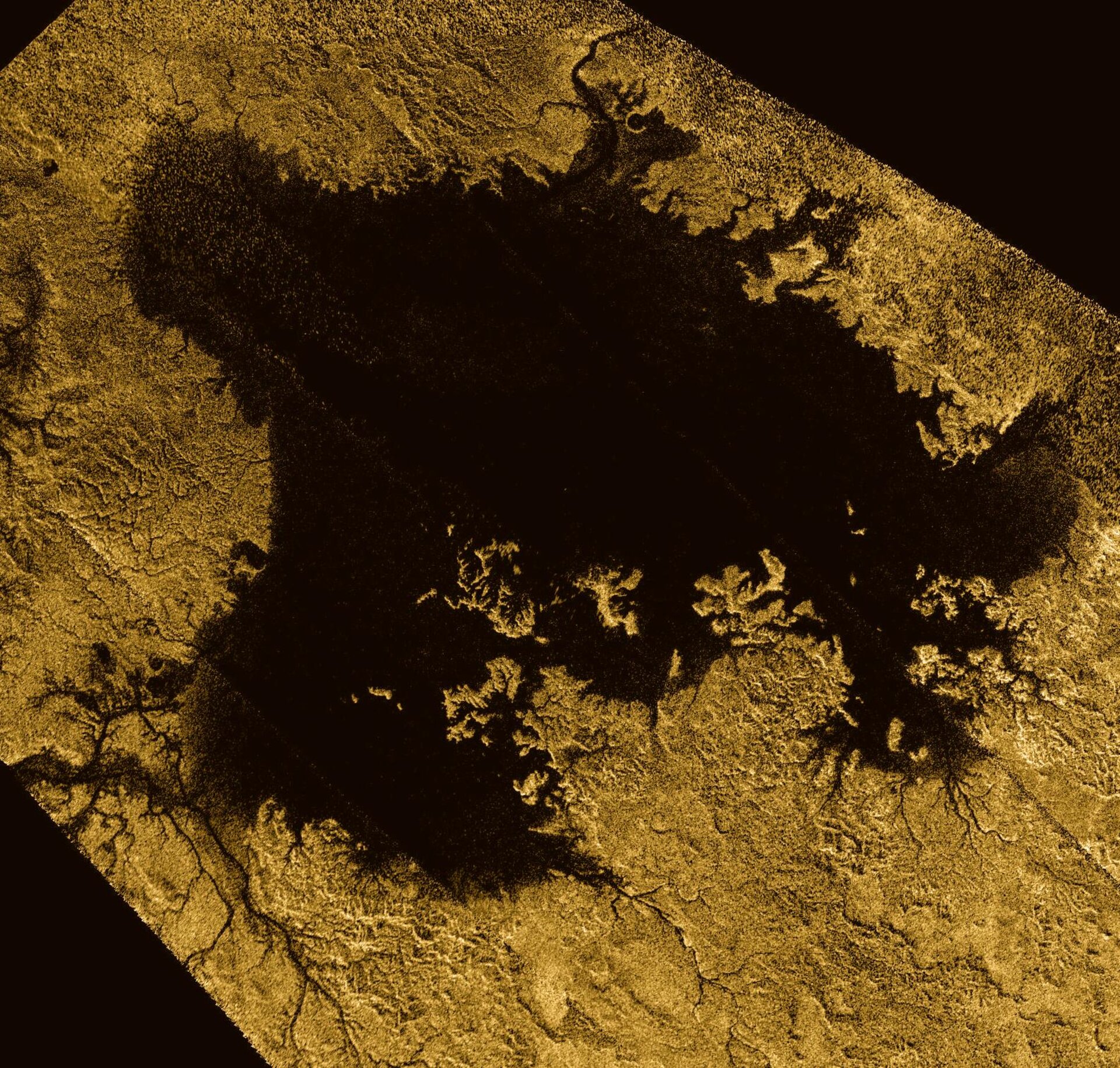 Saturn’s largest moon is covered in seas and lakes of liquid hydrocarbons – and one sea has now been found to be filled with pure methane, with a seabed covered by a sludge of organic-rich material, and possibly surrounded by wetlands.

Of all the moons in the Solar System, Titan is the only one with a thick atmosphere and large liquid reservoirs on its surface – in some ways making it more like a planet such as Earth.

Both Earth and Titan have atmospheres dominated by nitrogen, over 95% in Titan’s case. However, unlike Earth, there is little oxygen: the remaining is mostly methane, with a small amount of hydrogen, and trace amounts of other gases such as ethane.

And at the low temperatures found far from the Sun, the methane and ethane can in principle sit on the surface as liquids.

There has long been speculation about possible hydrocarbon lakes and seas on Titan, and when the international Cassini–Huygens mission arrived at Saturn in 2004 they were revealed.

Since then, the Cassini orbiter has revealed that more than 1.6 million sq km of Titan – almost 2% – are covered in liquid.

The exact make-up of these liquid reservoirs remained elusive until recently. A new study using scans from Cassini’s radar during flybys of Titan between 2007 and 2015 confirms that one of the largest seas on the moon, Ligeia Mare, is mostly liquid methane.

“We expected to find that Ligeia Mare would be mostly ethane, which is produced in abundance in the atmosphere when sunlight breaks methane molecules apart,” explains Alice Le Gall from the Laboratoire Atmosphères, Milieux, Observations Spatiales and Université Versailles Saint-Quentin, France, and lead author of the new study.

“Instead, this sea is predominantly made of pure methane.”

There are a number of possible explanations to account for the unexpected composition confirmed by this study.

“Either Ligeia Mare is replenished by fresh methane rainfall, or something is removing ethane from it,” says Alice.

“It is possible that the ethane ends up in the undersea crust, or that it somehow flows into the adjacent sea, Kraken Mare, but that will require further investigation.”

In their research, the scientists combined several observations of thermal emission from Ligeia Mare at one microwave wavelength. They also made use of data from a radio sounding experiment performed in May 2013 in a study led by Marco Mastrogiuseppe, who also collaborated on the current study.

During the radio sounding, the instrument detected echoes from the seafloor and inferred the depth of Ligeia Mare along Cassini’s track over the sea – the first-ever detection of the bottom of an extraterrestrial sea. The scientists were surprised to find depths in Ligeia Mare as great as 160 m at the deepest point along the radar track.

With this depth information, Alice and her colleagues were able to separate the contributions made to the sea’s observed thermal emission by the liquid sea and the seabed.

“This revealed that the seabed of Ligeia Mare is likely covered by a sludge layer of organic-rich compounds,” adds Alice.

In the atmosphere of Titan, nitrogen and methane react to produce a variety of organic molecules. Scientists believe the heaviest of these molecules fall to the surface. When they reach the sea, either by directly falling from the air, via rain or through Titan’s rivers, some are dissolved in the liquid methane, while the insoluble ones – compounds such as nitriles and benzene – sink to the sea floor.

The study also looked at the temperature of Ligeia Mare from winter to spring. The scientists expected that, like the seaside on Earth, the surrounding solid terrain would warm more rapidly than the sea.

Interestingly, the measurements showed no significant difference between the sea’s temperature and that of the shore, but they did reveal a general lag in warming in Titan’s north polar region as summer approaches. This suggests that the terrains surrounding the lakes and seas are flooded with liquid hydrocarbons, which would alter their thermal characteristics.

“This study has pinned down, for the first time, the basic properties of one of Titan’s seas, improving our understanding of climate and circulation processes on this fascinating world,” says Nicolas Altobelli, ESA’s Cassini–Huygens project scientist.

“Composition, seasonal change, and bathymetry of Ligeia Mare, Titan, derived from its microwave thermal emission” by A. Le Gall et al. (2016) is published in Journal of Geophysical Research: Planets.

The study is also based on the results presented in “The bathymetry of a Titan sea” by M. Mastrogiuseppe et al. (2014), published in Geophysical Research Letters.