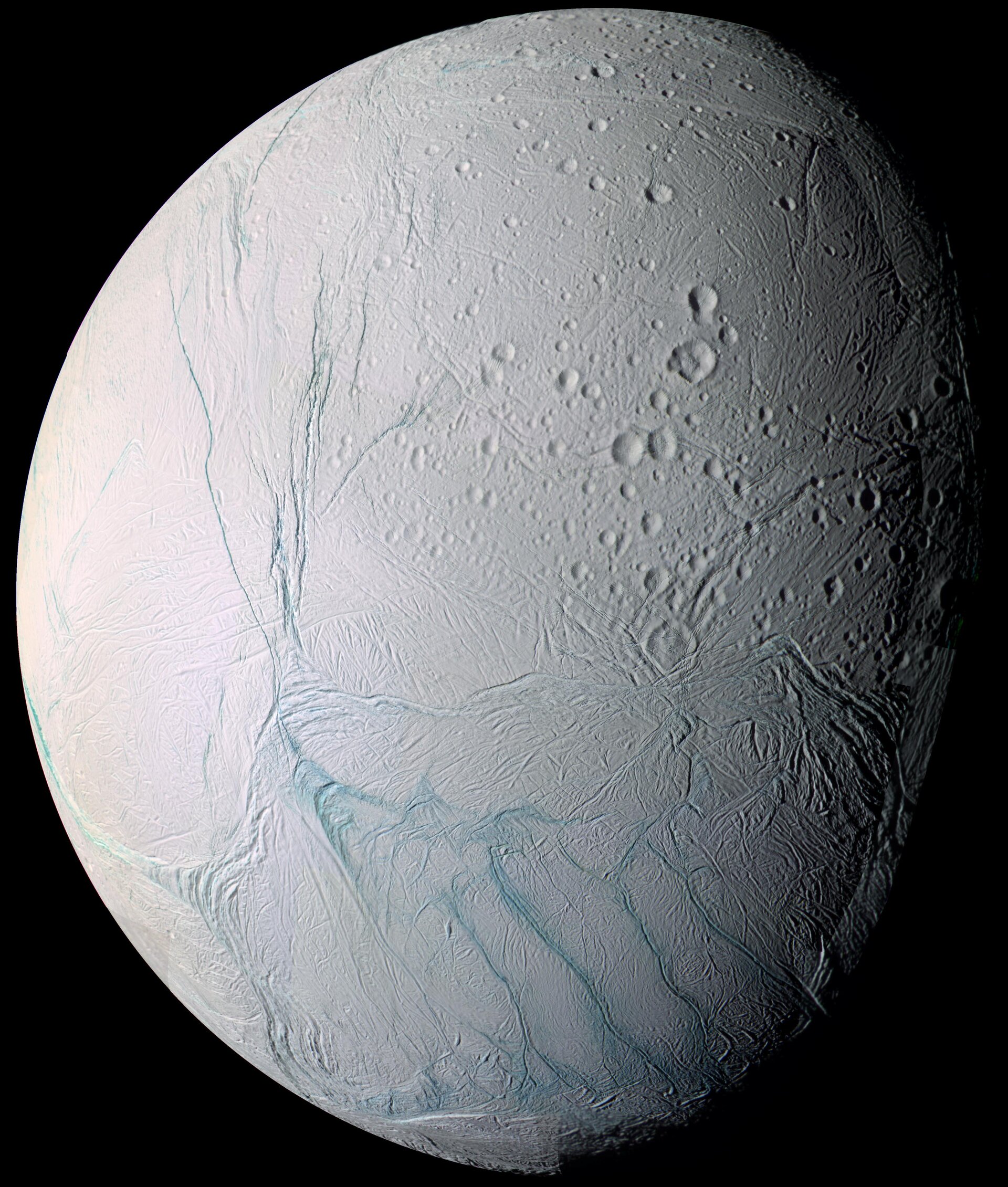 The results, based on data collected by Cassini’s Ion and Neutral Mass Spectrometer during Enceladus flybys in July and October 2008, will be published in tomorrow’s issue of the journal Nature.

"When Cassini flew through the plume erupting from Enceladus on 8 October last year, our spectrometer was able to sniff out many complex chemicals, including organic ones, in the vapor and icy particles," said Hunter Waite, the Cassini Ion and Neutral Mass Spectrometer Lead Scientist from the Southwest Research Institute in San Antonio, Texas, USA. "One of the chemicals definitively identified was ammonia."

How could ammonia equate to liquid water inside an ice-covered moon in one of the chillier neighborhoods of our solar system? As many a homeowner interested in keeping their abodes spick and span know, ammonia promptly dissolves in water. But what many people do not realize is that ammonia acts as antifreeze, keeping water liquid at lower temperatures than would otherwise be possible. With the presence of ammonia, water can exist in a liquid state to temperatures as low as 176K (-97°C).

“Given that temperatures in excess of 180K (-93°C) have been measured near the fractures on Enceladus where the jets emanate, we think we have an excellent argument for a liquid water interior,” said Waite.

Cassini discovered water vapor and particles spewing from Enceladus in 2005. Since then, scientists have been trying to determine if the plume originates from a liquid source inside the moon or is due to other causes.

"Ammonia is sort of a holy grail for icy volcanism," said William McKinnon, a scientist from Washington University in Saint Louis, Missouri, USA. “This is the first time we've found it for sure on an icy satellite of a giant planet. It is probably everywhere in the Saturn system."

Just how much water is contained within Enceladus’ icy interior is still up for debate. So far, Cassini has made five flybys of Enceladus, one of the chief targets for Cassini’s extended mission. Two close flybys are scheduled for November of this year, and two more close flybys are scheduled for April and May 2010. Data collected during these future flybys may help settle the debate.

“Where liquid water and organics exist, is there life?" said Jonathan Lunine a Cassini scientist from the University of Arizona, Tucson. "Such is the case for Earth; what was found on Enceladus bolsters this moon's promise for containing potential habitable environments.”

The Cassini-Huygens mission is a cooperative project of NASA, ESA and the Italian Space Agency. The Cassini orbiter was designed, developed and assembled at Jet Propulsion Laboratory in California, USA. JPL manages the mission for the Science Mission Directorate at NASA Headquarters in Washington.