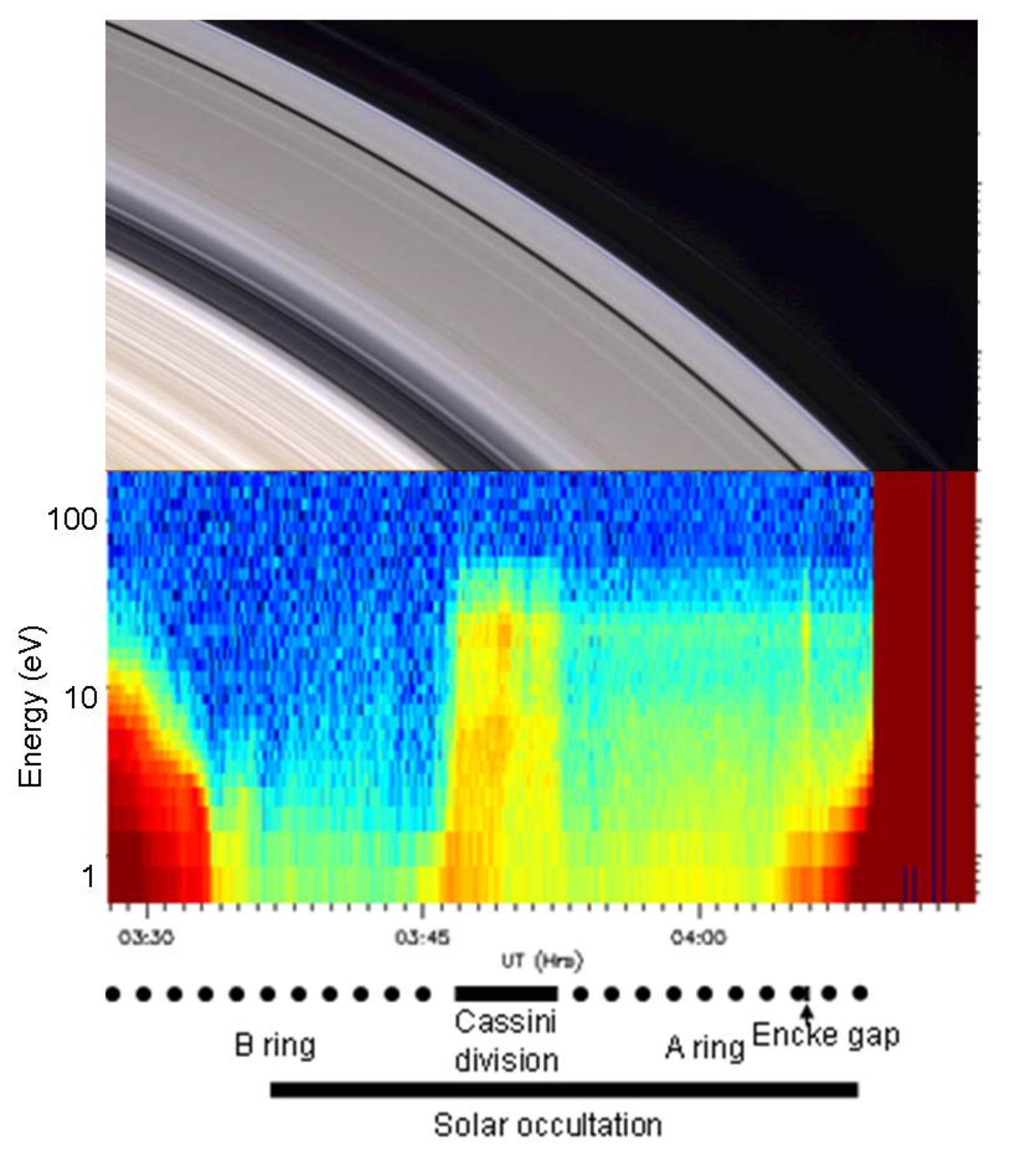 Data from the NASA/ESA/ASI Cassini spacecraft indicate that Saturn's majestic ring system has its own atmosphere - separate from that of the planet itself.

During its close fly-bys of the ring system, instruments on Cassini have been able to determine that the environment around the rings is like an atmosphere, composed principally of molecular oxygen.

This atmosphere is very similar to that of Jupiter's moons Europa and Ganymede.

The finding was made by two instruments on Cassini, the Ion and Neutral Mass Spectrometer (INMS) and the Cassini Plasma Spectrometer (CAPS) instrument, the latter having a European involvement with co-investigators from US, Finland, Hungary, France, Norway and UK.

Saturn's rings consist largely of water ice mixed with smaller amounts of dust and rocky matter. They are extraordinarily thin: though they are 250 000 kilometres or more in diameter they are no more than 1.5 kilometres thick.

Despite their impressive appearance, there is very little material in the rings - if the rings were compressed into a single body it would be no more than 100 kilometres across.

The origin of the rings is unknown. Scientists once thought that the rings were formed at the same time as the planets, coalescing out of swirling clouds of interstellar gas 4000 million years ago. However, the rings now appear to be young, perhaps only hundreds of millions of years old.

Another theory suggests that a comet flew too close to Saturn and was broken up by tidal forces. Possibly one of Saturn's moons was struck by an asteroid smashing it to pieces that now form the rings.

Though Saturn may have had rings since it formed, the ring system is not stable and must be regenerated by ongoing processes, probably the break-up of larger satellites.

Water molecules are first driven off the ring particles by solar ultraviolet light. They are then split into hydrogen and atomic oxygen, by photodissocation. The hydrogen gas is lost to space, the atomic oxygen and any remaining water are frozen back into the ring material due to the low temperatures, and this leaves behind a concentration of oxygen molecules on the ring surfaces and, maybe through ion-neutral chemistry, molecular oxygen is formed, but this is not yet well understood.

Dr Andrew Coates, co-investigator for CAPS, from the Mullard Space Science Laboratory (MSSL) at University College London, said: "As water comes off the rings, it is split by sunlight; the resulting hydrogen and atomic oxygen are then lost, leaving molecular oxygen.

"INMS and CAPS see molecular oxygen ions, and CAPS sees an ‘electron view’ of the rings. These represent the ionised products of that oxygen and some additional electrons driven off the rings by sunlight."