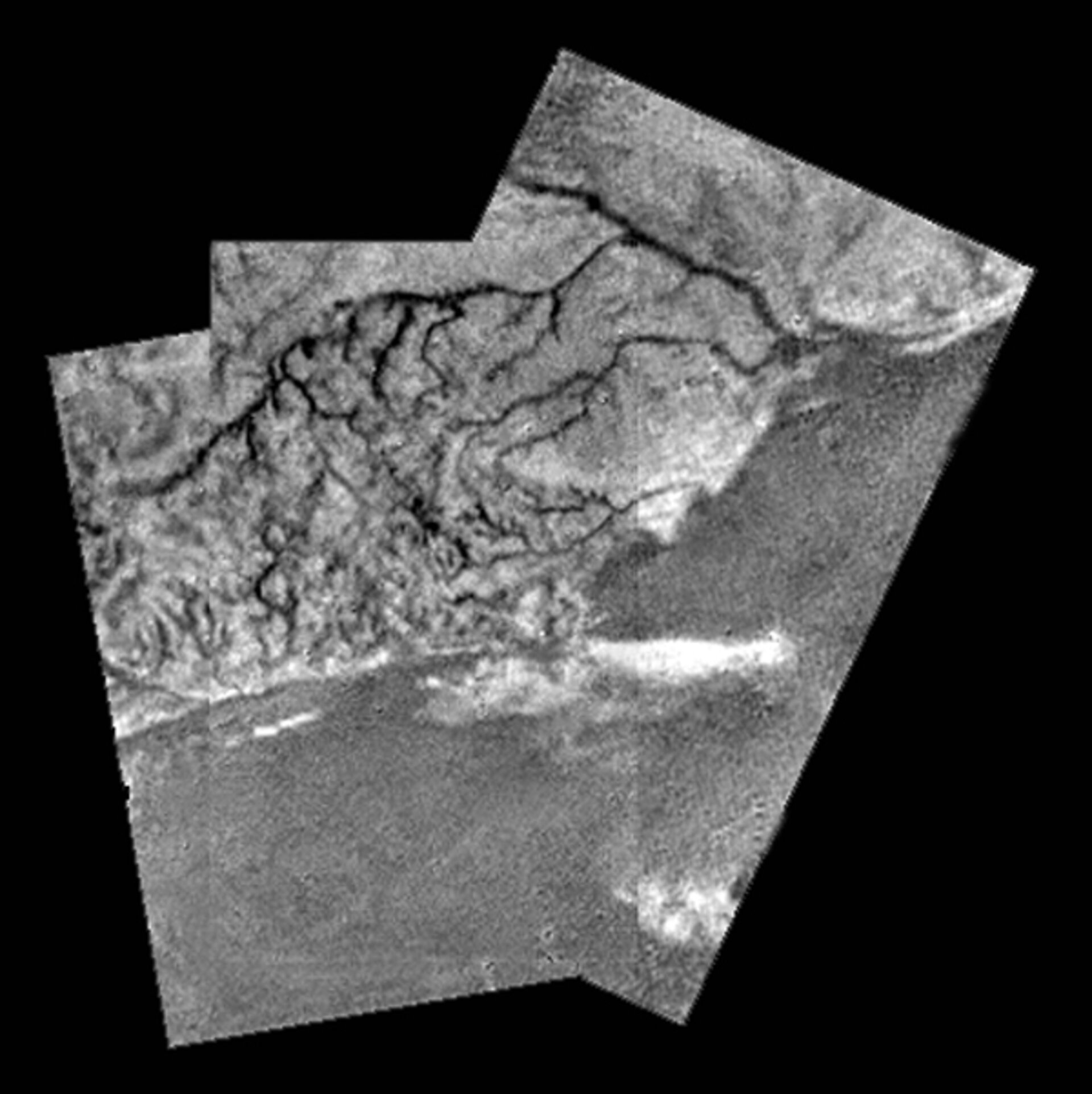 ESA PR 05-2005. On 14 January ESA's Huygens probe made an historic first ever descent to the surface of Titan, 1200 million kilometres from Earth and the largest of Saturn's moons.

Huygens travelled to Titan as part of the joint NASA/ESA/ASI Cassini-Huygens mission. Starting at about 150 kilometres altitude, six multi-function instruments on board Huygens recorded data during the descent and on the surface. The first scientific assessments of Huygens' data were presented during a press conference at ESA head office in Paris on 21 January.

"We now have the key to understanding what shapes Titan's landscape," said Dr Martin Tomasko, Principal Investigator for the Descent Imager-Spectral Radiometer (DISR), adding: "Geological evidence for precipitation, erosion, mechanical abrasion and other fluvial activity says that the physical processes shaping Titan are much the same as those shaping Earth."

Spectacular images captured by the DISR reveal that Titan has extraordinarily Earth-like meteorology and geology. Images have shown a complex network of narrow drainage channels running from brighter highlands to lower, flatter, dark regions. These channels merge into river systems running into lakebeds featuring offshore 'islands' and 'shoals' remarkably similar to those on Earth.

Data provided in part by the Gas Chromatograph and Mass Spectrometer (GCMS) and Surface Science Package (SSP) support Dr Tomasko's conclusions. Huygens' data provide strong evidence for liquids flowing on Titan. However, the fluid involved is methane, a simple organic compound that can exist as a liquid or gas at Titan's sub-170°C temperatures, rather than water as on Earth.

Titan's rivers and lakes appear dry at the moment, but rain may have occurred not long ago.

Deceleration and penetration data provided by the SSP indicate that the material beneath the surface's crust has the consistency of loose sand, possibly the result of methane rain falling on the surface over eons, or the wicking of liquids from below towards the surface.

Heat generated by Huygens warmed the soil beneath the probe and both the GCMS and SSP detected bursts of methane gas boiled out of surface material, reinforcing methane's principal role in Titan's geology and atmospheric meteorology -- forming clouds and precipitation that erodes and abrades the surface.

In addition, DISR surface images show small rounded pebbles in a dry riverbed. Spectra measurements (colour) are consistent with a composition of dirty water ice rather than silicate rocks. However, these are rock-like solid at Titan's temperatures.

Titan's soil appears to consist at least in part of precipitated deposits of the organic haze that shrouds the planet. This dark material settles out of the atmosphere. When washed off high elevations by methane rain, it concentrates at the bottom of the drainage channels and riverbeds contributing to the dark areas seen in DISR images.

New, stunning evidence based on finding atmospheric argon 40 indicates that Titan has experienced volcanic activity generating not lava, as on Earth, but water ice and ammonia.

Thus, while many of Earth's familiar geophysical processes occur on Titan, the chemistry involved is quite different. Instead of liquid water, Titan has liquid methane. Instead of silicate rocks, Titan has frozen water ice. Instead of dirt, Titan has hydrocarbon particles settling out of the atmosphere, and instead of lava, Titanian volcanoes spew very cold ice.

"We are really extremely excited about these results. The scientists have worked tirelessly for the whole week because the data they have received from Huygens are so thrilling. This is only the beginning, these data will live for many years to come and they will keep the scientists very very busy", said Jean-Pierre Lebreton, ESA's Huygens Project Scientist and Mission manager.

The Cassini-Huygens mission is a cooperation between NASA, ESA and ASI, the Italian space agency. The Jet Propulsion Laboratory (JPL), a division of the California Institute of Technology in Pasadena, is managing the mission for NASA's Office of Space Science, Washington DC. JPL designed, developed and assembled the Cassini orbiter while ESA operated the Huygens atmospheric probe.