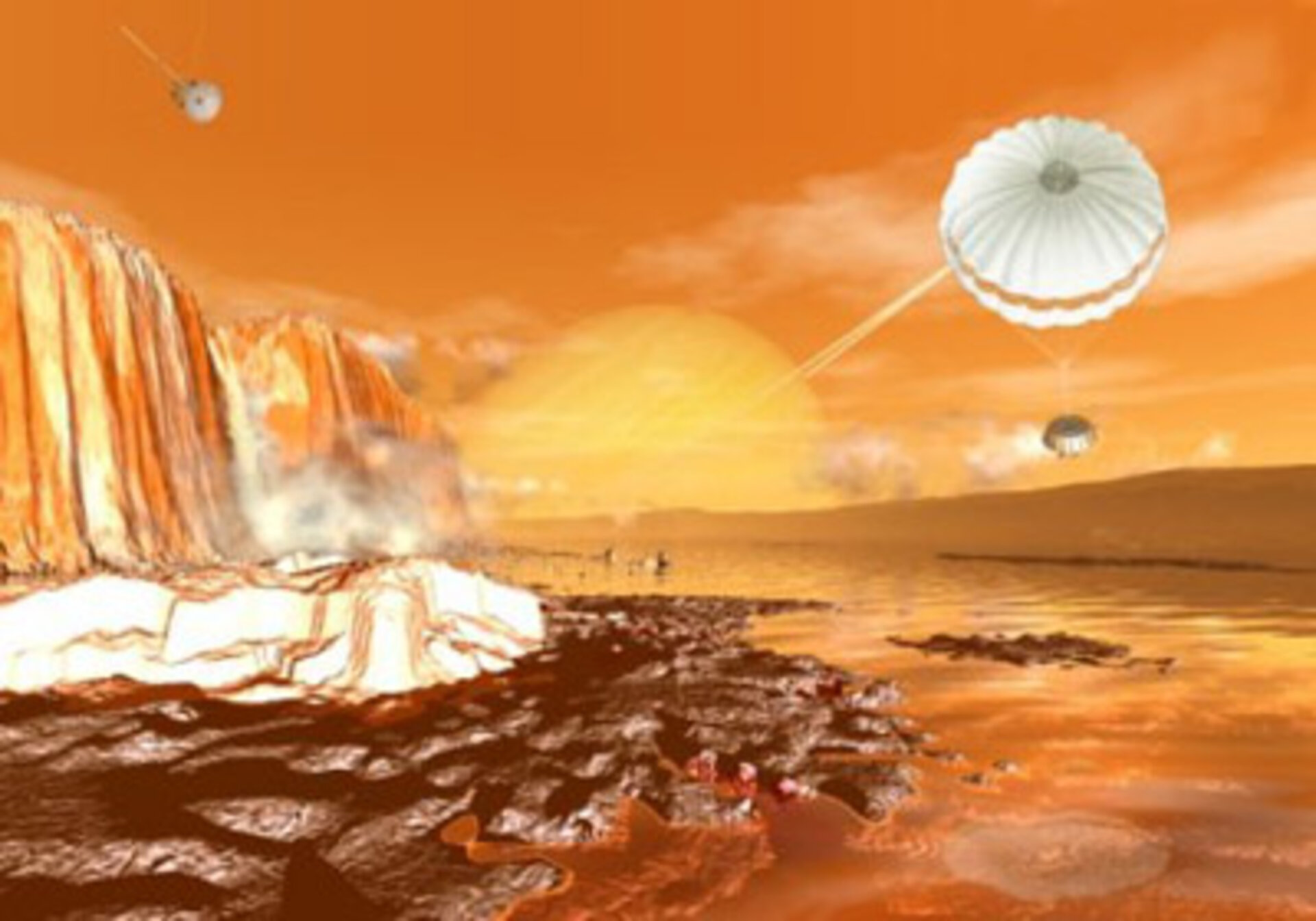 Titan, Saturn's largest moon, is a mysterious place. Its thick atmosphere is rich in organic compounds. Some of them would be signs of life if they were on our planet. How do they form on Titan? Will they help us to discover how life began on Earth?

ESA's Huygens probe, arriving at Titan in 2005, will help find answers. Here on Earth, ground-based telescopes are playing their part also. They will help scientists to decide how and where precisely Huygens will land. What will it be - on solid ground or in an ocean of methane?

NASA's Voyager 1 provided the first detailed images of Titan in 1980. They showed only an opaque, orange atmosphere, apparently homogeneous. It was so thick that you could not see the surface. However, other data revealed exciting things. Similarly to Earth, Titan's atmosphere is mostly nitrogen but there is also methane and many other organic compounds.

Organic compounds form when sunlight destroys the methane. If sunlight is continuously destroying methane, how is methane getting into the atmosphere? On Earth today, it is life itself that refreshes the methane supply. Methane is a by-product of the metabolism of many organisms. Could this mean there is life on Titan?

Titan is not a pleasant place for life. It is far too cold for liquid water to exist, and all known forms of life need liquid water. Titan's surface is -180°C. According to one exotic theory, long ago, the impact of a meteorite, for example, might have provided enough heat to liquify water for perhaps a few hundred or thousand years. However, it is unlikely that Titan is a site for life today. Jean-Pierre Lebreton, ESA's Huygens Project Scientist, is puzzled by the amount of methane that persists in Titan's atmosphere. Could there be oceans of methane on or under the surface?

"More and more astronomers are pointing their instruments to this amazing cold world. And their results are helping us a lot," points out Lebreton. Images from the Keck Observatory reveal methane-containing clouds near Titan's south pole. Could Titan have the equivalent of a weather cycle?

Lebreton says: "It is a major discovery. It means that the atmosphere is much more dynamic than we used to think."

The Cassini orbiter will clearly see these clouds, carrying out precise observations before, during and after releasing the Huygens probe.

Over the years, scientists have dramatically changed their minds about Titan's surface. In the mid-nineties, the NASA/ESA Hubble Space Telescope spied an area on Titan that was brighter than the rest.

More recent observations show the same feature better. What are these bright and dark patches? Lebreton wonders: "The bright area could be a continent and the rest oceans. We don't know yet. There is no doubt, though, that the surface appears very diverse, not uniform. There are a lot of surprises waiting for us there."

To land on an ocean would probably mean better data from Huygens. Even if the probe lasted only a few minutes before sinking, it would at least stay in an upright position. Being the right way up is essential for sending the data back to the Cassini orbiter and to the scientists on Earth.

Moreover, some of Huygens's instruments are better prepared to analyse liquids. If Huygens lands on a solid surface instead, there is a higher risk of falling in the wrong direction and not being able to easily communicate with Cassini.

Such is the fate of an ESA probe - to travel extremely far to an object you know comparatively little about to measure extremely familiar organic compounds extremely quickly. Space is a risky place and it is all about extremes!