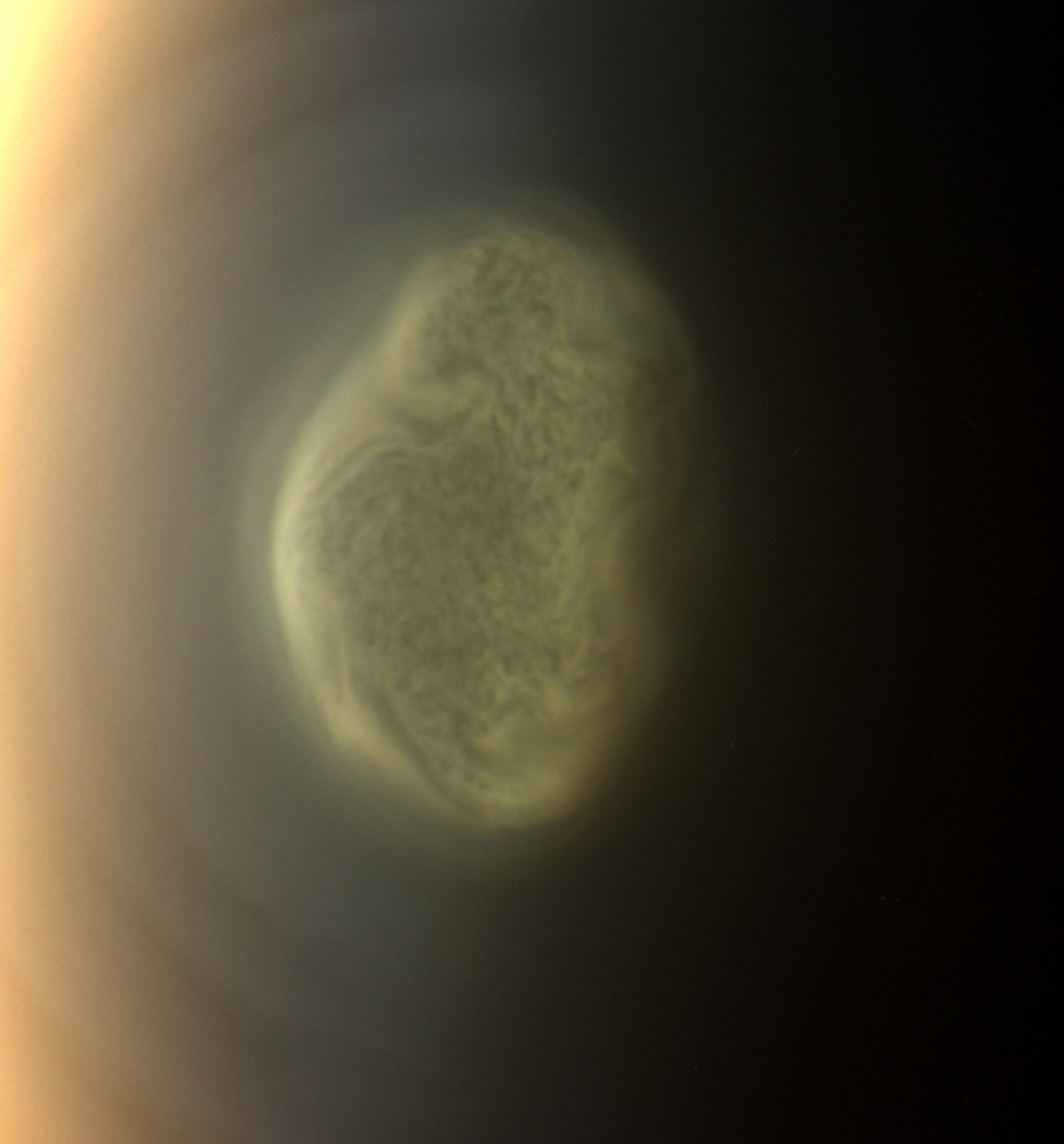 Scientists using the international Cassini spacecraft have studied the rapid change in seasons on Saturn’s moon Titan, following equinox in August 2009, which saw the formation of a swirling vortex and a build up of exotic gases at unexpectedly high altitudes.

Titan is the only other body in the Solar System with a thick nitrogen-rich atmosphere like Earth’s. Titan’s atmosphere also contains methane and hydrogen, with trace amounts of other gases including hydrocarbons that form at high altitudes as a result of reactions with sunlight.

These complex molecules filter down into the lower atmosphere and eventually combine to produce an orange smog.

A separate layer of haze is found at a much higher altitude of 400–500 km and can be seen at the limb of the moon, apparently detached from the rest of the atmosphere.

This haze was thought to represent the ceiling of Titan’s ‘middle atmosphere’ circulation which extends from pole to pole in one giant cell, but new results from Cassini suggest otherwise.

The change in solar heating was reflected by a rapid reversal in circulation direction in Titan’s single pole-to-pole atmospheric cell, with an upwelling of gases in the summer hemisphere and downwelling in the winter hemisphere.

“Even though the amount of sunlight reaching the south pole was decreasing, the first thing we saw there during the six months after equinox was actually an increase in temperature at altitudes of 400–500 km, as atmospheric gases that had been lofted to these heights were compressed as they subsequently sank into a newly forming southern vortex,” says Dr Nick Teanby from the University of Bristol, UK, and lead author of the study reported in the journal Nature.

“This heating effect is the same one that causes compressed air in a bicycle pump to heat up, and provided the smoking gun that the change in seasons was underway.”


In the months that followed, up to a hundred-fold increase in atmospheric gas concentration was measured over the south pole at the same high altitudes.

Cassini’s instruments found that these gas molecules were sinking through the atmosphere at a rate of 1–2 millimetres per second.

Dr Teanby’s team conclude that for the enrichment and motion to be seen throughout these altitudes, the actual source of the complex gas molecules must be higher still, and that the detached haze layer cannot signal the top of the atmospheric circulation cell.

The new observations instead suggest that these complex haze molecules are produced higher up, but that when they drop down to the 400–500 km level, a change in the character of the haze takes place, perhaps as individual particles clump together.

“It’s impressive to see such dramatic solar-driven seasonal changes on a world where the sunlight is nearly a hundred times weaker than it is on Earth,” adds Dr Teanby.

“Since a year on Titan is nearly 30 Earth years long, for the atmosphere to change over a period of just six months is extremely rapid.”

The new report is based on data collected by Cassini’s Composite Infrared Spectrometer (CIRS). The Cassini–Huygens mission is a cooperative project of NASA, ESA and the Italian space agency, ASI. The Jet Propulsion Laboratory, a division of the California Institute of Technology in Pasadena, manages the mission for NASA’s Science Mission Directorate, Washington, DC, USA.