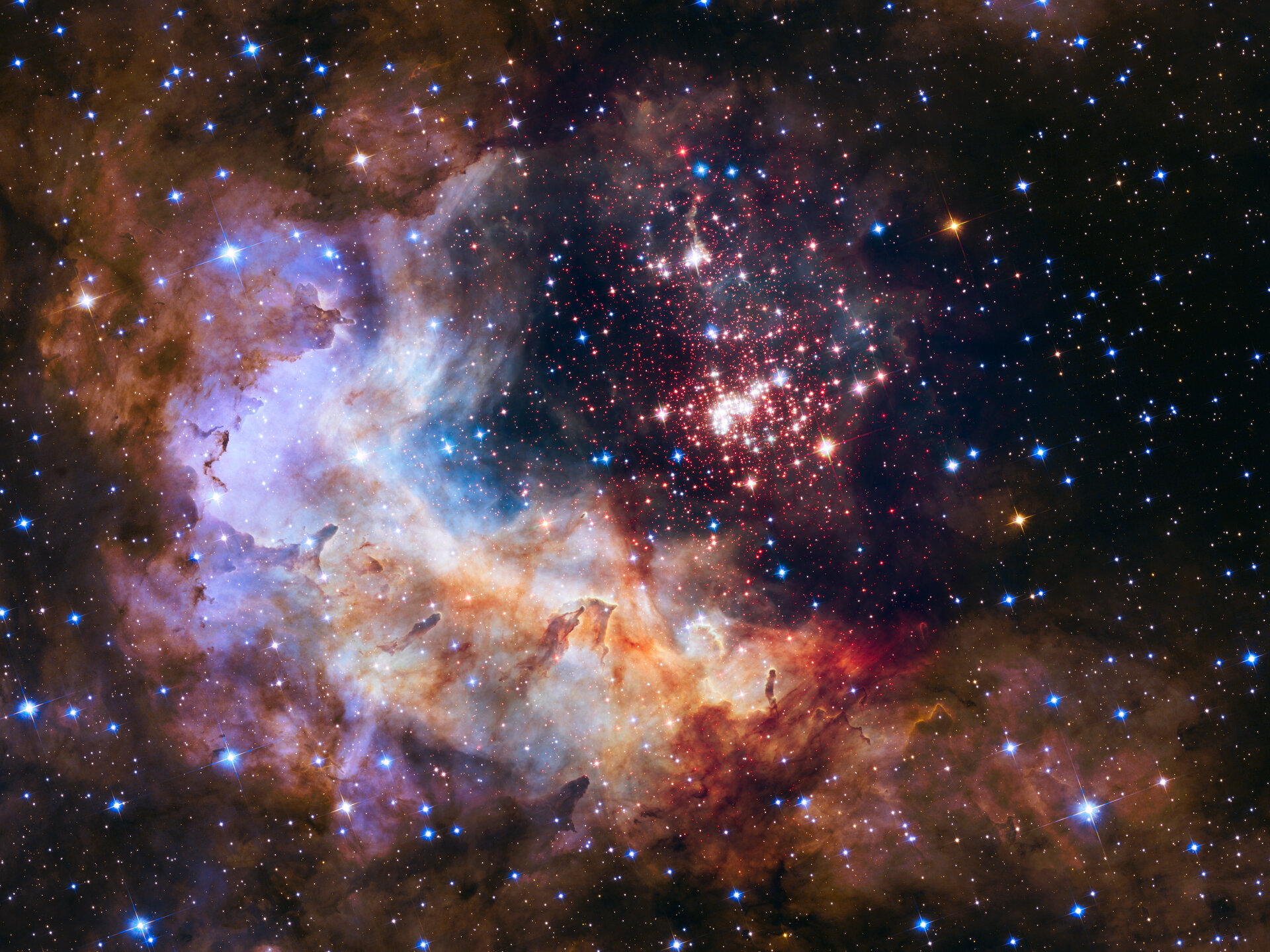 This glittering tapestry of young stars exploding into life in a dramatic fireworks display has been released today to celebrate 25 incredible years of the Hubble Space Telescope.

The NASA/ESA Hubble was launched into orbit by the Space Shuttle on 24 April 1990. It was the first space telescope of its kind, and has surpassed all expectations, providing a quarter of a century of discoveries, stunning images and outstanding science.

The anniversary image is bursting with silver anniversary fireworks, showing off a giant young star cluster known as Westerlund 2, sparkling with the light of about 3000 stars.

The cluster resides in the prolific stellar breeding ground called Gum 29, some 20 000 light-years away in the constellation of Carina.

The stellar nursery is difficult to observe because it is surrounded by dust, but by combining images from Hubble’s Advanced Camera for Surveys in the visible and the Wide Field Camera 3 at near-infrared wavelengths, astronomers were able to peer through the dusty veil and gain a clear view of the cluster.

Hubble’s sharp vision resolves the dense concentration of stars in the central cluster, which measures only about 10 light-years across.

The giant star cluster is only about two million years old, but contains some of the brightest, hottest and most massive stars ever discovered. Some of these are carving deep cavities in the surrounding material through their intense ultraviolet light and the high-speed charged particles contained in their stellar winds.

These etch the enveloping hydrogen gas cloud in which the stars were born, resulting in a fantasy landscape of pillars, ridges and valleys. The pillars, composed of dense gas and dust, resist erosion from the fierce radiation and powerful winds. These gaseous monoliths are a few light-years tall and point to the central cluster. Other dense regions surround the pillars, including dark filaments of dust and gas.

Besides sculpting the gaseous terrain, the brilliant stars may also help to create the next generation of offspring. When the stellar winds hit dense walls of gas, they create shocks, which can generate a new wave of star birth along the wall of the cavity.

Many of the red dots scattered throughout the landscape are newly forming stars that are still wrapped in their gas and dust cocoons. These stellar embryos have not yet ignited the hydrogen in their cores to light up as stars. However, Hubble’s near-infrared vision allows astronomers to identify these fledglings.

Meanwhile, the brilliant blue stars seen throughout the image are mostly in the foreground.

This image is a testament to Hubble’s observational power and demonstrates that, even with 25 years of operations under its belt, its story is by no means over. Hubble has set the stage for the James Webb Space Telescope – scheduled for launch in 2018 – but will not be immediately replaced by this next-generation observatory, instead working alongside it.

Now, 25 years after launch, is the time to celebrate Hubble’s future potential as well as its remarkable history.

For more images and information about Hubble’s 25 years in orbit, visit: http://hubble25th.org