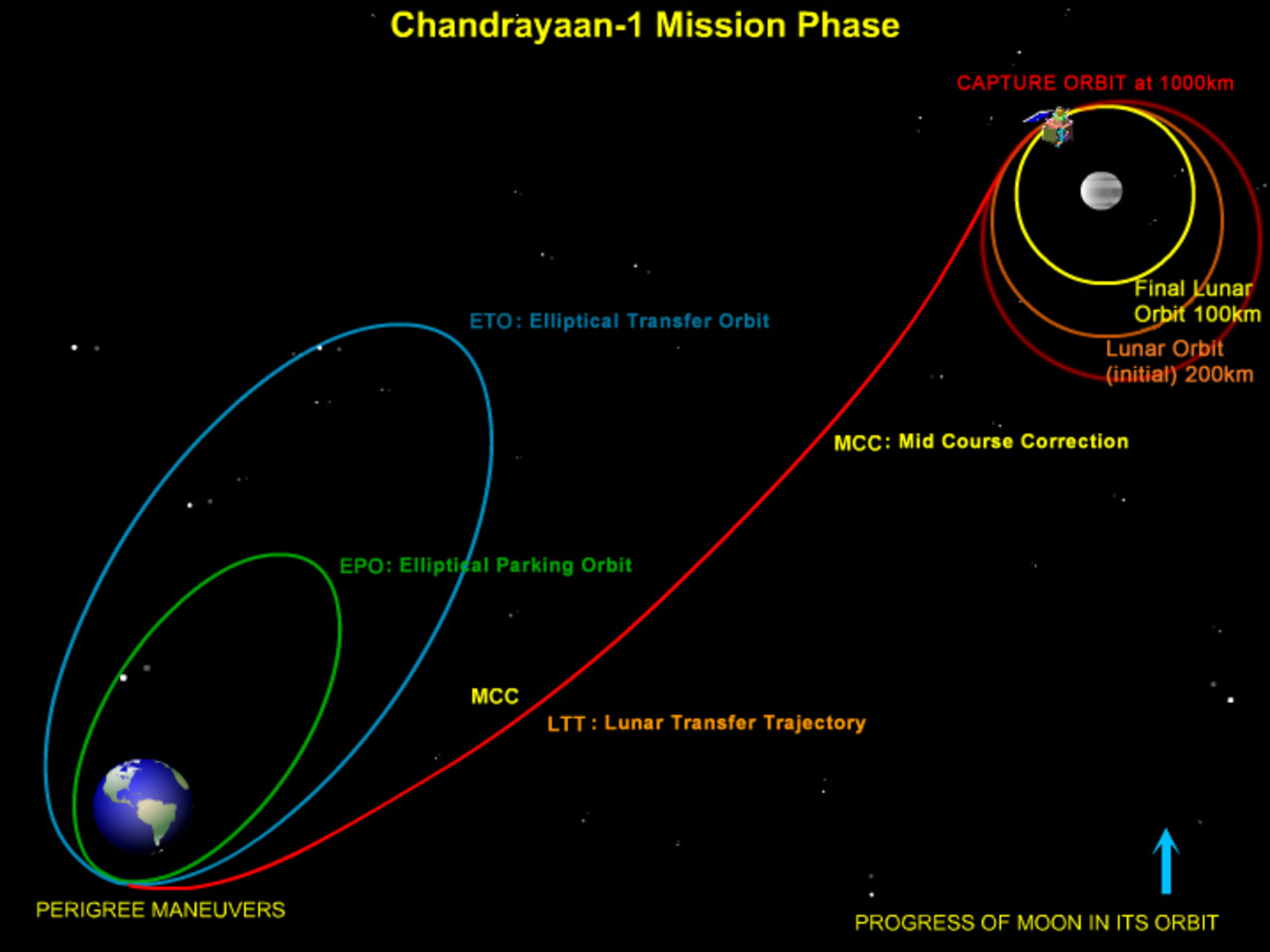 Chandrayaan-1, India’s first mission to the Moon, was successfully launched earlier this morning from the Satish Dhawan Space Centre (SHAR) in Sriharikota, India.

The PSLV-C11 rocket, an upgraded version of the Indian Space Research Organisation’s (ISRO) Polar Satellite Launch Vehicle, lifted off at 02:52 Central European Summer Time (CEST) and, about 20 minutes later, injected the spacecraft into a highly elongated orbit around Earth.

This marked the beginning of Chandrayaan-1’s journey to the Moon, which will culminate with a major manoeuvre – the lunar orbit insertion – in about two weeks. Once the spacecraft is orbiting the Moon, further manoeuvres will progressively lower its altitude to the final 100 km-high circular orbit.

At the earliest opportunity, the spacecraft will eject the ‘Moon Impact Probe’ to provide information about the lunar surface. The mission will then continue from orbit, with remote-sensing studies carried out by its 11 scientific instruments. Three of these instruments were provided by Europe (UK, Germany, Sweden) through ESA.

A new step in India-Europe collaboration

India and Europe began collaborating on space ventures when, in 1978, the first cooperation agreement between ESA and ISRO was signed. In 1981, an Ariane 1 launcher carried India’s first geostationary satellite, Apple. So far, 13 of India’s INSAT satellites have flown on Europe’s Arianes.

Chandrayaan-1, ISRO’s first mission beyond Earth orbit, marks the beginning of a new era of collaboration between ESA and India in space science.

ESA is making the expertise gained thanks to its SMART-1 lunar mission (2003–2006) available for this collaboration. Apart from coordinating and supporting the provision of the three European instruments (C1XS, SIR-2 and SARA, versions of the first two of which flew on SMART-1), ESA assisted in areas such as flight dynamics and is supporting data archiving and processing. As a result of the collaboration, ESA and ISRO will share the data from their respective instruments.

We congratulate ISRO on the successful launch this morning and we are eagerly looking forward to science to begin.

“In an era of renewed interest for the Moon on a worldwide scale, the ESA-ISRO collaboration on Chandrayaan-1 is a new opportunity for Europe to expand its competence in lunar science while tightening the long-standing relationship with India - an ever stronger space power,” said Prof. David Southwood, ESA Director of Science and Robotic Exploration. “While the exploration of space calls for new challenges to be overcome, joining forces is becoming more and more a key to future successes.”

“We congratulate ISRO on the successful launch this morning and we are eagerly looking forward to science to begin,” Prof. Southwood concluded.

After the first signature in 1978, the ESA-ISRO cooperative agreement on space has been renewed four times. The latest renewal was signed in January 2007, and covers a period of five years. The specific ESA-ISRO agreement on Chandrayaan-1 was signed in 2005.

Chandrayaan-1 is led by ISRO. In addition to ESA, other international partners in the mission include Bulgaria and the USA.

The European instruments on board are: