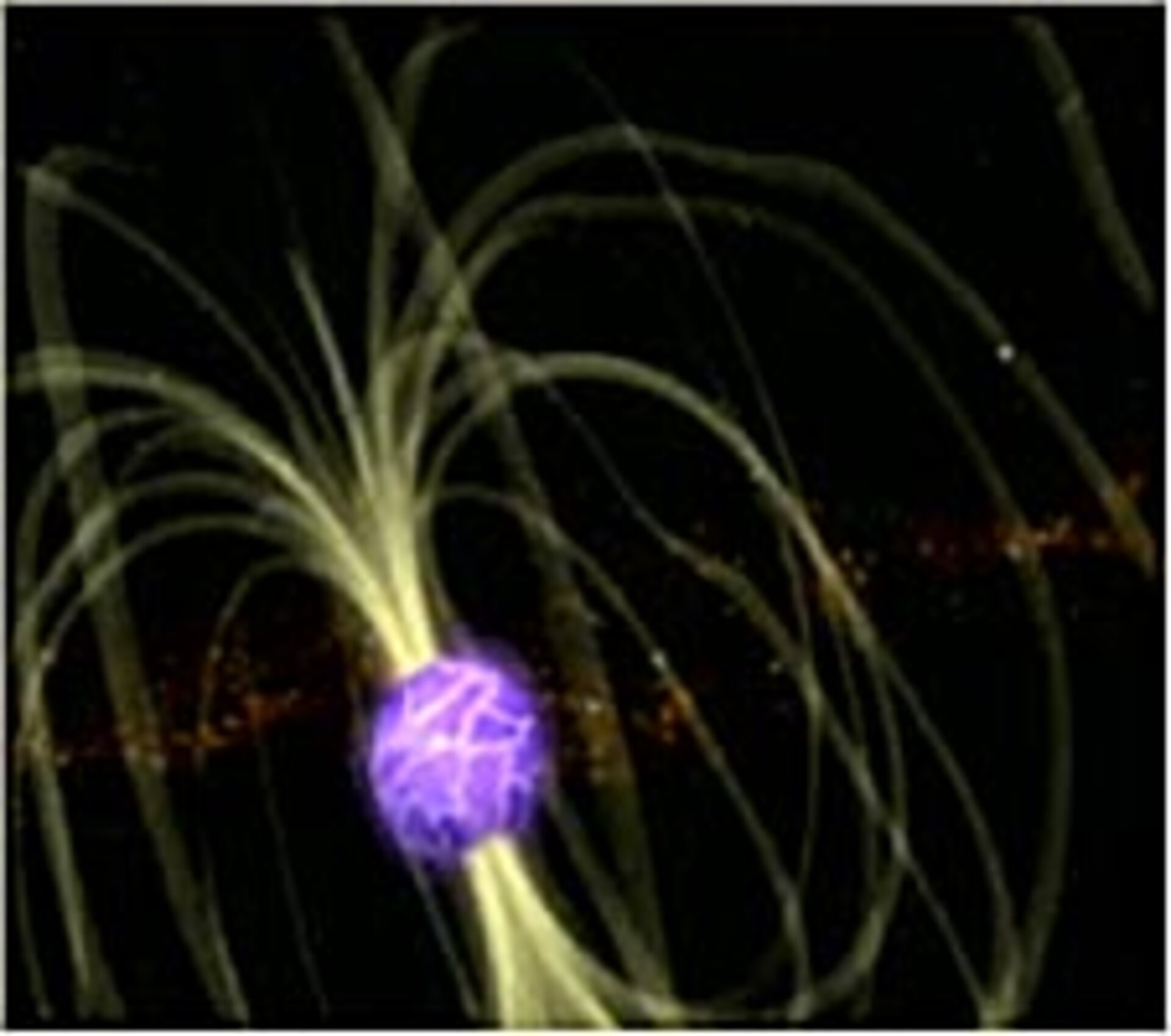 Unique data obtained by ESA’s Cluster and the joint Chinese/ESA Double Star missions provided the first evidence of cracks on a neutron star’s crust. The cracks were caused during the initial phase of the biggest ‘starquake’ on a neutron star ever recorded.

On 27 December 2004, the radiation from an extremely powerful explosion on the surface of neutron star SGR 1806-20 reached Earth and lasted more than the record time of six minutes.

During the first 200 milliseconds, the amount of energy released was equivalent to what our Sun radiates in 250 000 years, making this the brightest event originating outside our Solar System and being recorded on Earth.

SGR 1806-20 is a ‘magnetar’, a class of neutron star characterised by an ultra-high magnetic field. SGR 1806-20 is located at around 50 000 light-years from Earth on the far side of our galaxy, the Milky Way in the direction of the constellation Sagittarius.

A similar blast within 10 light-years of our planet would have destroyed Earth’s ozone layer and be similar to a major nuclear blast. Fortunately, the closest known magnetar is 13 000 light-years away.

Several scientific satellites observed the giant flare experienced by SGR 1806-20, including ESA’s gamma-ray observatory, Integral. At its peak, the intensity of the explosion was hundreds of times stronger than any other observed so far.

For the first fractions of a second (200 milliseconds) the blast blinded almost all instruments on gamma-ray satellites that were observing that region of the sky.

However, the particle detectors on board the flotilla of Cluster and Double Star satellites, designed to study Earth’s magnetosphere, were able to observe the blast for its whole duration without being blinded.

"The unique Cluster and Double Star data provide the first evidence of three separate timescales within the first 100 milliseconds of this event," said Prof. Steve Schwartz, lead author of the results, from Imperial College London. "It is based on the characteristics of these timescales, combined with theoretical models, that we could draw a scenario on what happened in SGR 1806-20."

Schwartz and colleagues provide the first observational evidence that the giant flare was produced when the crust of the magnetar could no longer plastically compensate the internal magnetic stress and finally cracked.

One of the three timescales even allowed the estimation of the fracture size: about five kilometres across. This is a significant size considering that SGR 1806-20 has been estimated to be a sphere of only a few tens of kilometres in diameter.

Schwartz combined its findings with other results on the SGR 1806-20 starquake obtained by Italian astronomer Gianluca Israel, from INAF-Osservatorio Astronomico di Roma, and colleagues.

These results, based on NASA’s Rossi X-ray Timing Explorer data, revealed the presence of quasi-periodic oscillations in the energy emitted by the neutron star towards the end of its super-blast.

"These oscillatory modes are likely to be associated with global seismic oscillations. In particular, the large crustal fracturing inferred by us can easily excite oscillation modes with characteristic frequencies in the range we observed," commented Schwartz.

Therefore Cluster and Double Star, though designed to study the various boundary layers of Earth’s magnetosphere, have not only enabled to directly estimate crustal properties of magnetars, they have also linked interior magnetic processes and their external consequences during giant flares.