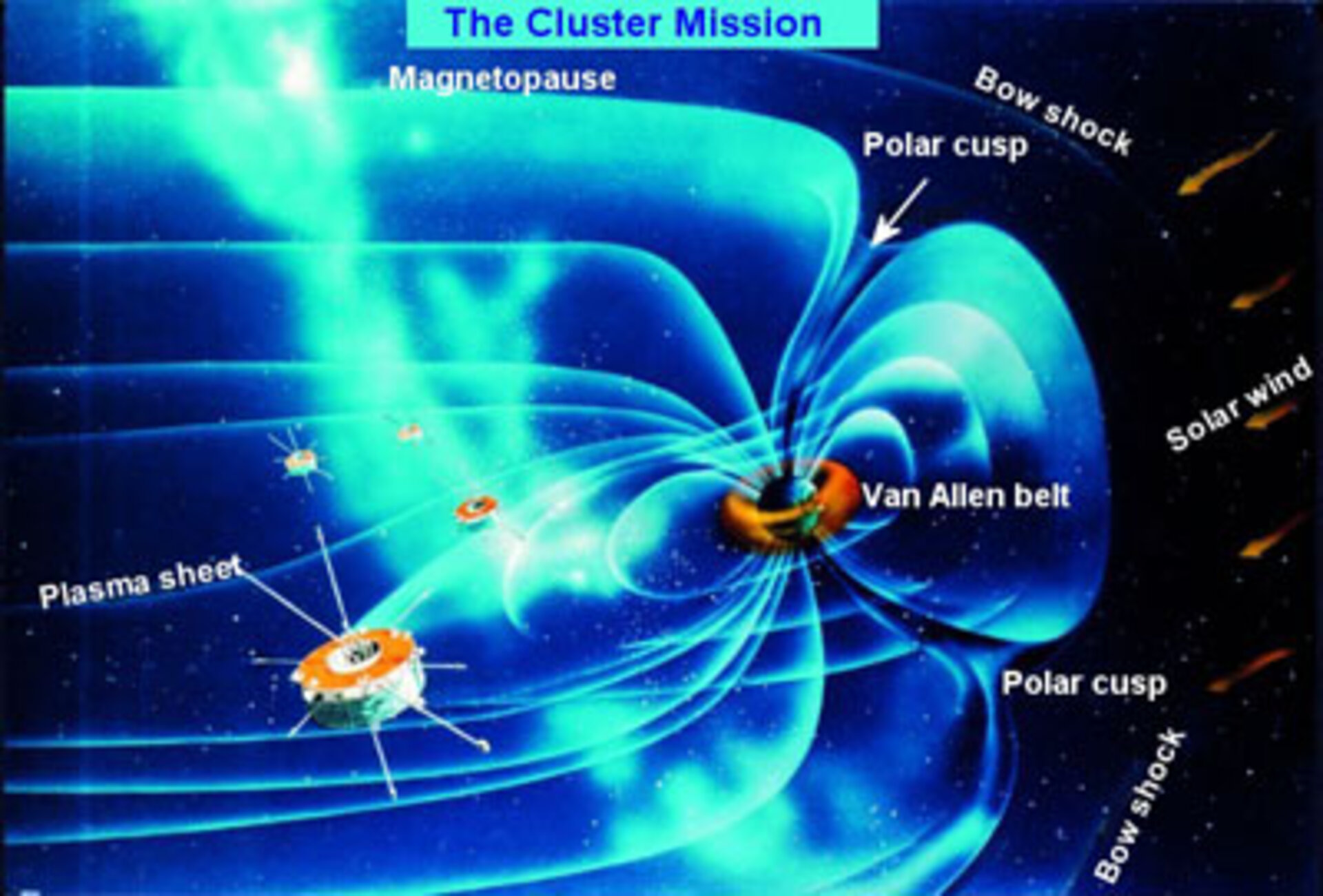 For the first time in the history of space exploration, four identical spacecraft have been despatched to explore the invisible magnetic "bubble" that surrounds our planet - the magnetosphere. Dozens of instruments on board the Cluster quartet have now begun to ‘map’ this region in unprecedented detail.

Over the next two years, Cluster will provide a unique, three-dimensional view of the battleground between the Earth and our nearest star. Hundreds of scientists around the world are eagerly waiting to analyse this treasure trove of data.

Our Earth is an oasis in space – the only haven of life yet discovered in the entire Universe. Yet, just a few hundred kilometres above our heads, a continuous battle is being fought between the forces of nature.

Like a ship in an everlasting storm, the Earth is bombarded by swarms of particles that are ejected from the Sun, then sweep towards us through space at supersonic speeds. Most of these cosmic "bullets" in the solar wind are deflected by the planet’s magnetic shield, the magnetosphere, and sail harmlessly by.

But Earth’s shield is not invulnerable. Gusts in the solar wind can squeeze it mercilessly, pushing it back towards the planet. Weak spots in the defences allow energetic particles to penetrate. As they cascade down the magnetic field lines, they collide with molecules in the upper atmosphere. One spectacular result is the aurora, beautiful curtains of light that grace the polar skies.

Not all side-effects of solar storms are as harmless. Particularly severe magnetic storms on our nearest star can cause havoc back on Earth, with widespread power cuts, disrupted radio communications and damage to satellites.

Scientists have been studying this continuous feud between the Sun and Earth for many years, first from the ground and then with the aid of single satellites. But the complexities of the Sun-Earth connection have always – until now – eluded them.

Cluster is now offering the first opportunity to improve the current state of knowledge about the magnetosphere. In the last few months, scientists have begun to sample the first intriguing morsels from the feast of fascinating information that will accumulate over the two-year-long duration of the mission.

Preliminary analysis of this early data is already providing new insights into the interaction between the electrically charged particles of the solar wind and our planet’s magnetic field.

The key to this scientific revolution is Cluster’s ability to fly in close formation along elongated orbits which take them between 19,000 and 119,000 km from the planet - almost one third of the way to the Moon. During their passage around the Earth, the spacecraft are sometimes inside the Earth's magnetic shield and sometimes outside, fully exposed to the supersonic solar wind.

As the mini-flotilla flies in a tetrahedral (lopsided pyramid) pattern around the planet, its suite of scientific sensors studies the changes taking place around each spacecraft. By comparing the times of these events, scientists are able to obtain the first three-dimensional picture of near-Earth space.

Cluster’s first glimpses of the continuously fluctuating magnetic battleground came on 9 November 2000, when the quartet made their first crossings of the magnetopause - the boundary between interplanetary space (where the solar wind reigns supreme) and the Earth’s region of magnetic domination.

These crossings were a surprise for the Cluster science team, since they occurred about one week earlier than predicted.

Data from the experiments on Cluster clearly showed that gusts in the solar wind were causing the magnetosphere to balloon in and out. These rapid fluctuations in size meant that the Cluster spacecraft were alternately inside and outside Earth’s magnetic field. For the first time, scientists were able to receive data simultaneously from both sides of the magnetopause - something that is only possible with a multi-spacecraft mission.

At the peak of the sunstorm, the spacecraft were exposed to the solar wind for more than 2 hours until the compression of the magnetosphere decreased and the spacecraft moved back inside the Earth’s domain.

Since then, the Cluster spacecraft have made regular measurements of the magnetopause. One of the earliest interesting discoveries has been the confirmation of the existence of waves along this ever-shifting boundary in space.

"They are like waves that form on the surface of a lake when the wind is blowing," said Cluster Project Scientist, Philippe Escoubet. "The Cluster spacecraft give us for the first time the size and speed of these waves."

"Cluster has given us the first observational proof that these waves exist," said Dr. Nicole Cornilleau-Wehrlin of CETP in Vélizy, Principal Investigator on the STAFF experiment. "Further studies will enable us to discover more about what happens and why."

By late December, the elliptical Cluster orbits carried the quartet close to a huge shock wave in near-Earth space. This bow shock, which lies some 100,000 km from the planet, forms when particles in the solar wind slow to subsonic speeds after slamming into Earth’s magnetic shield at more than 1 million km/h. Cluster’s battery of instruments is beginning to record in great detail what happens at this turbulent barrier.

Once again, gusts in the stream of solar particles caused the magnetosphere to behave like a punchbag undergoing heavy body blows. These "punches" caused the bow shock to migrate through space, crossing and recrossing the Cluster spacecraft at irregular intervals.

"This is the first time we have ever seen the bow shock in such remarkable detail," said Professor André Balogh of Imperial College London, the Principal Investigator for the FGM experiment on Cluster.

Comparisons of spacecraft measurements will also be invaluable for in-depth studies of other parts of the magnetosphere. Of particular interest to scientists are the cusps - funnel-shaped gaps in the Earth’s magnetic shield that that guide electrified particles into the upper atmosphere.

The first Cluster observations of the north polar cusp were made on 14 January 2001, when shifts in the solar wind caused the spacecraft to pass right through this narrow "window" in the magnetic envelope at an altitude of about 64,000 km. The EISCAT ground-based radar in Svalbard, which lay beneath the Cluster spacecraft at that time, confirmed the abrupt change in the cusp’s position.

Preliminary analysis of data from Cluster indicates that the upper regions of the cusp were moving through space at around 30 km/s. Further studies of the different data sets are expected to provide valuable new insights into the physical processes taking place in these key regions above the Earth's magnetic poles.

"This is a very dynamic region, but it has only been studied previously by single spacecraft," said Dr. Escoubet. "This is why the Cluster measurements are so important. With four spacecraft we can obtain the most accurate, three-dimensional view of what is happening around our planet."

Cluster and the Solar and Heliospheric Observatory (SOHO) make up the Solar-Terrestrial Science Programme - one of the Cornerstones of ESA’s Horizons 2000 long term science plan. Together, they are playing key roles in international efforts to investigate the physical interaction between the Sun and Earth.