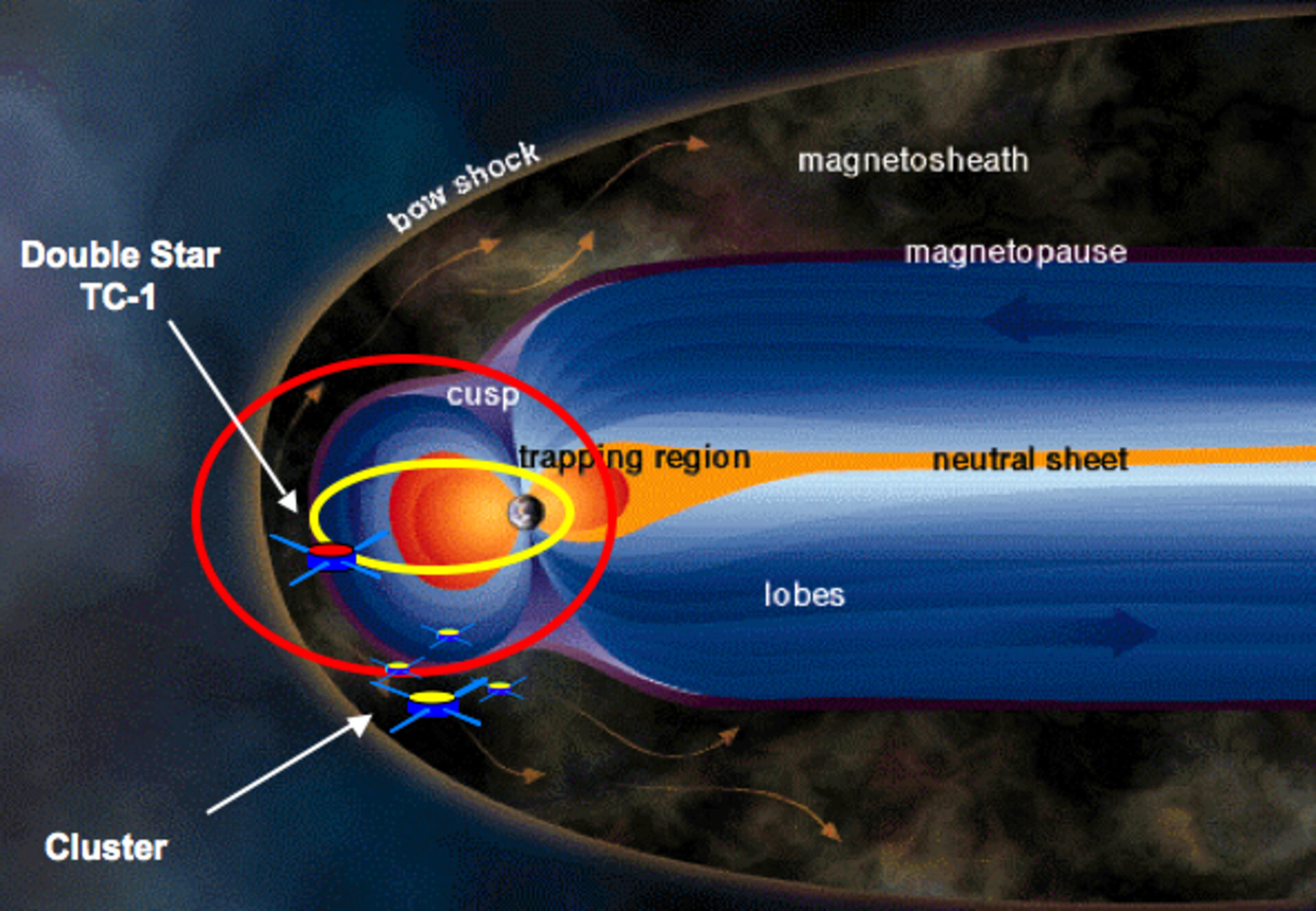 Co-ordinated efforts by China/ESA’s Double Star and ESA’s Cluster spacecraft have allowed scientists to zero in on an area where energetic particles from the Sun are blasting their way through the Earth’s magnetic shield. Solar material penetrating the Earth's magnetic shield can represent a hazard to both astronauts and satellites.

On 8 May 2004, one of the two Double Star satellites (TC-1) and all four Cluster spacecraft found themselves in the firing line. For about 6 hours, the Cluster spacecraft were buffeted every 8 minutes by intense flows of electrically charged particles released by the Sun. The Double Star TC-1 spacecraft had it even rougher, being blasted every four minutes for eight hours.

The basic physical mechanism responsible for the occurrence of flux transfer events is called magnetic reconnection. In the 1950s, space physicists believed that magnetic reconnection let solar particles break through at a steady rate. That view changed in the late 1970s, when several studies showed that the magnetic reconnection could also be intermittent and take place in pulses, lasting a few minutes. Each pulse produces a magnetic flux tube (a Flux Transfer Event).

On 8 May 2004, these magnetic flux tubes swept over Cluster and Double Star again and again. As the Cluster and Double Star data clearly showed, the same location underwent magnetic reconnection several times, creating new successive magnetic flux tubes to channel more charged particles towards the Earth. The observations stopped probably because the spacecraft moved out of range and not because the reconnection region weakened in any way.

The data from the five spacecraft allowed scientists led by Aurélie Marchaudon of the Laboratoire de Physique et Chimie de l’Environnement, Centre Nationale de la Recherche Scientifique (CNRS) and Université d’Orléans, Orléans, France to triangulate the location of the magnetic reconnection region, and to deduce its size. They found that the reconnection site was located on the daylight west side of the Earth’s magnetic shield and was around 25000 kilometres across. A computer simulation of the event, conducted by Jean Berchem of the University of California Los Angeles (UCLA) and his team, confirmed the possibility of magnetic reconnection occurring at that location.

Although intermittent reconnection has been observed in the past, this was one of the longest series of continuous observations ever taken of a magnetic reconnection region in the Earth’s magnetosphere. Perhaps most surprising is that 8 May 2004 was just relatively a normal day for the Earth’s magnetic field. There were no large magnetic storms on Earth, or spectacular aurorae to fill the night sky. However, Cluster and Double Star revealed that energetic particles from the Sun were blasting their way through the Earth’s magnetic shield and penetrating the Earth’s environment.

Each day, Cluster and Double Star return more observations that allow scientist to understand the invisible magnetic turbulence high above our heads.