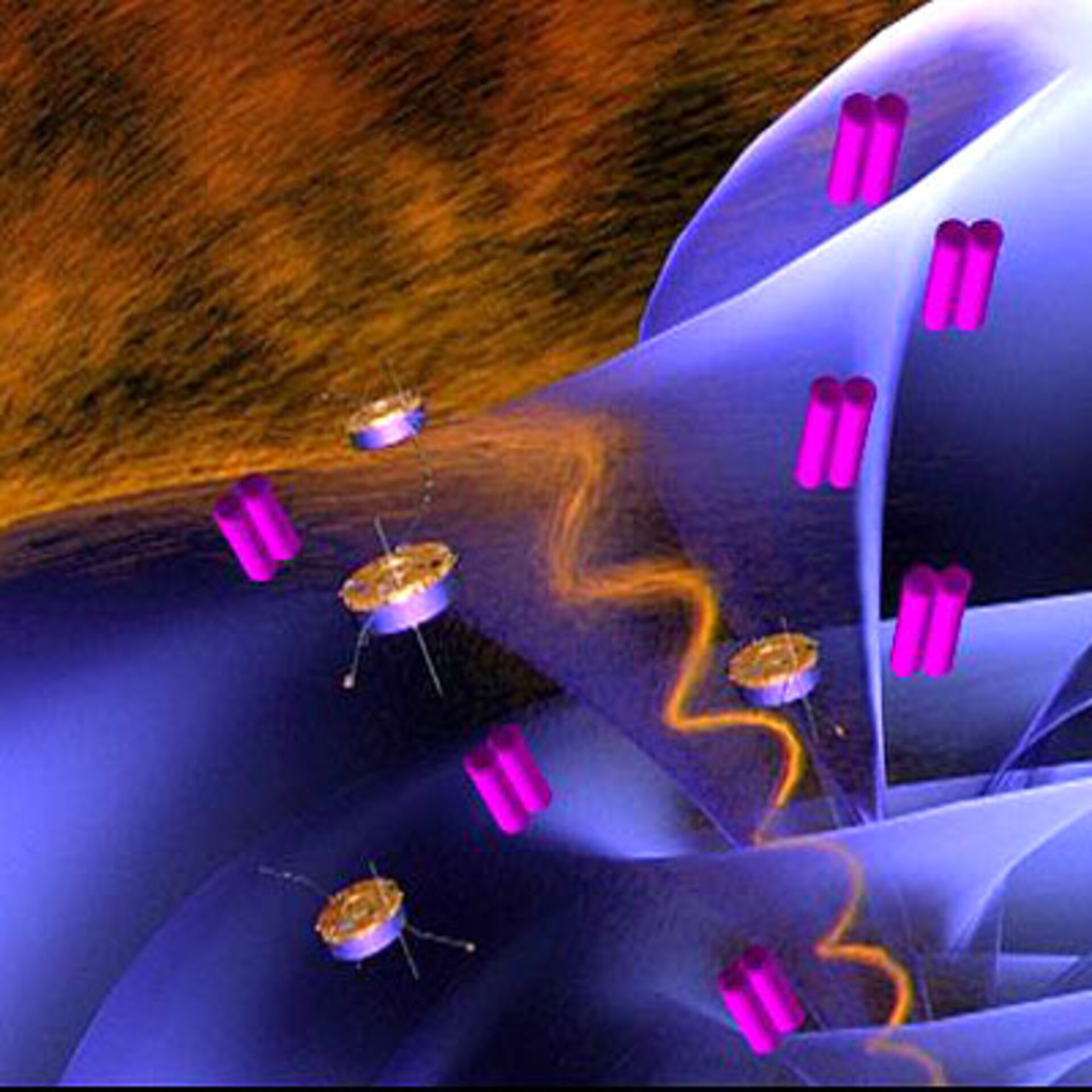 Thanks to measurements by ESA’s Cluster mission, a team of European scientists have identified ‘micro’-vortices in Earth’s magnetosphere.

Such small-scale vortex turbulence, whose existence was predicted through mathematical models, has not been observed before in space. The results are not only relevant for space physics, but also for other applications like research on nuclear fusion.

On 9 March 2002, the four Cluster satellites, flying in tetrahedral formation at 100 kilometres distance from each other, were crossing the northern ‘magnetic cusp’ when they made their discovery. Magnetic cusps are the regions over the magnetic poles where the magnetic field lines surrounding Earth form a magnetic funnel.

The magnetic cusps are the two important regions in Earth’s magnetosphere where the ‘solar wind’ - a constant flow of charged particles generated by the Sun that crosses the whole Solar System - can directly access the upper layer of Earth’s atmosphere (the ionosphere).

Large amounts of plasma (a gas of charged particles) and energy are transported through these and other ‘accessible’ regions, to penetrate the magnetosphere - Earth’s natural protective shield. Only less than one percent of all the energy carried by the solar wind and hitting the Earth’s magnetosphere actually manages to sneak through, but it still can have a significant impact on earthly systems, like telecommunication networks and power lines.

The solar material sneaking in generates turbulence in the plasma surrounding Earth, similar to that in fluids but with more complex forces involved. Such turbulence is generated for instance in the areas of transition between layers of plasma of different density and temperature, but its formation mechanisms are not completely clear yet.

The turbulence exists at different scales, from few thousand to few kilometres across. With in situ ‘multi-point’ measurements, the four Cluster satellites reported in the year 2004 the existence of large scale turbulence - vortices up to 40 000 kilometres wide, at the flank of the ‘magnetopause’ (a boundary layer separating the magnetosphere from free space). The new discovery of ‘micro’ turbulence, with vortices of only 100 kilometres across, is a first in the study of the plasma surrounding Earth.

Such a discovery is very relevant. For example, it allows scientists to start linking small and large-scale turbulence, and start questioning how it is actually formed and what are the connections. For instance, what are the basic mechanisms driving and shaping the turbulence? How much do vortices contribute to the transport of mass and energy through boundary layers? Are small vortices needed to generate large ones? Or, on the other hand, do large vortices dissipate their energy and create a cascade of smaller ones?

In trying to answer these questions, Cluster is an unprecedented diagnostic tool for the first three-dimensional map of the near-Earth environment, its exceptionality being given by its multi-spacecraft simultaneous observations. Cluster is revolutionising our understanding of the ways and the mechanisms by which solar activity affects Earth.

Besides, Cluster’s study of the turbulence in Earth’s plasma, with the dynamics and the energies involved, is contributing to the advancement of fundamental theories on plasma. This is not only important in astrophysics, but also as far as the understanding and the handling of plasma in laboratories is concerned, given the high energies involved. This is particularly relevant for research on nuclear fusion.

For example, Cluster’s data are complementing research on plasma physics in the international ITER project, an experimental step involving several research institutes around the world for tomorrow’s electricity-producing power plants. In this respect, by probing into the magnetosphere, Cluster has free access to the only open ‘natural laboratory’ for the study of plasma physics.

The discovery of the mentioned giant vortices was published in the 12 August 2004 issue of Nature, in a paper by H. Hasegawa, et al.