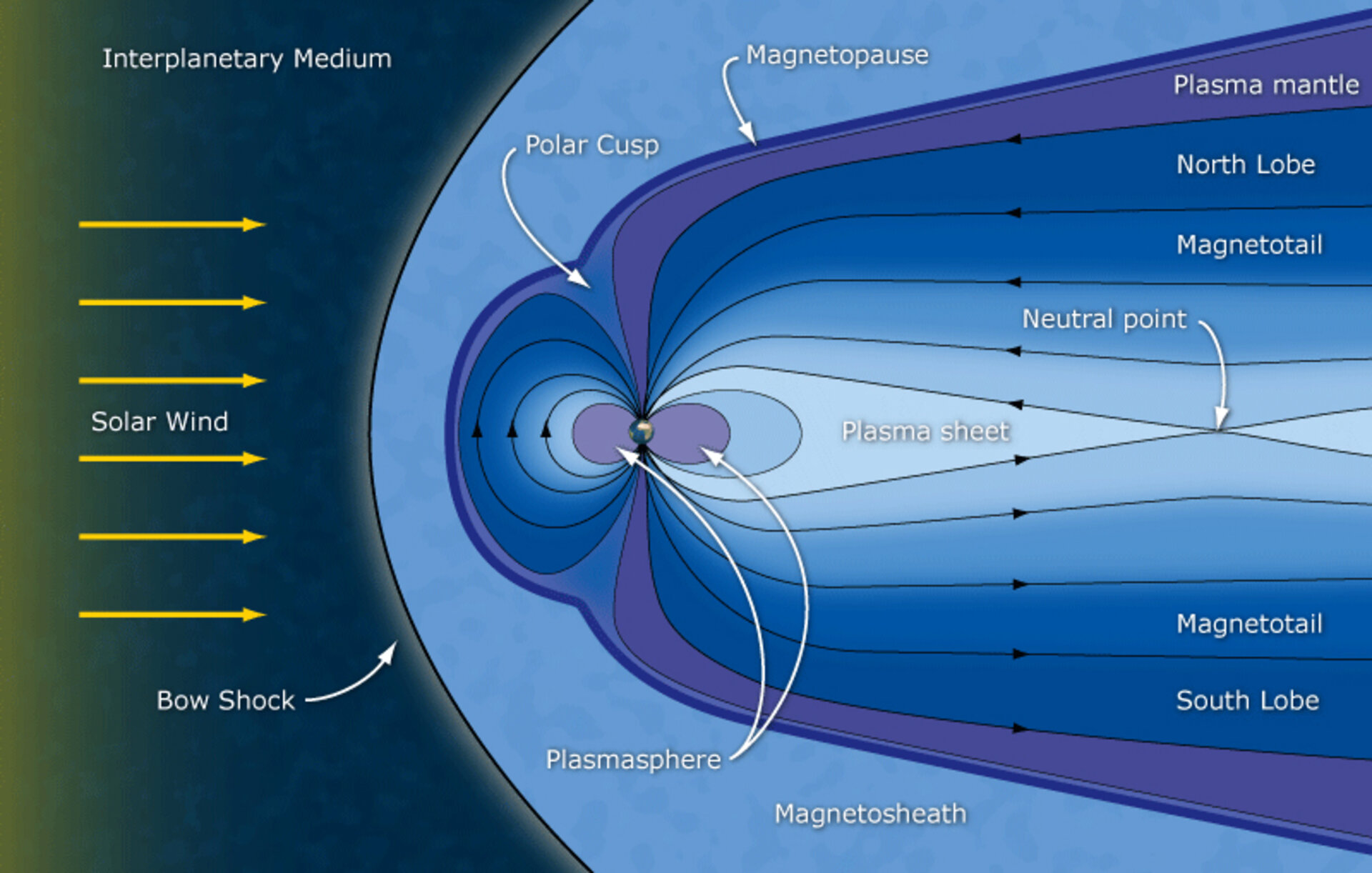 ESA’s Cluster constellation has found that multiple, high-speed beams of electrically charged particles, or ions, are formed on the night-side of near-Earth space and get accelerated towards Earth.

These observations are key to understanding how solar material manages to reach the Earth’s night-side, to forecast the behaviour of the magnetic environment around our planet, and in turn, to better protect ground and space-based technologies.

Different theories were proposed in the 80’s and 90’s to explain the presence of these ion beams. But, only recently, data collected by the Cluster satellites helped scientists discriminate between these theories.

At each pole, a significant fraction of these particles bounce back along the magnetic field lines and populate the plasma mantle, a layer of plasma located on the night-side of Earth, inside the magnetosphere and along its boundary. Under the action of electromagnetic forces, plasma contained in the mantle drifts equator-ward, along the tail axis.

On 1 September 2003, the Cluster satellites were flying in close formation in the magnetotail when three out of the fours satellites simultaneously detected two distinct beams of protons streaming Earthward, along the magnetic field. The beams were moving at very high speeds - 1000 and 2400 km/s, respectively - and were observed for a period of about 3 minutes.

Due to the way plasma is transported in the magnetotail, the same source could not have been responsible for accelerating both beams. So, scientists concluded that there were at least two independent sources for these accelerated beams. More than 90 events of this kind (multiple accelerated ion beams) have been identified in the data recorded by Cluster from 2001 to 2003. They have been recorded during quiet or moderately disturbed geomagnetic periods, covering a large range of velocities.

A theory proposed about 14 years ago explains how this happens: when the plasma drifting from the plasma mantle reaches the current sheet, a region located along the magnetic equator, it can cross a few areas called ‘resonant locations’ (red rectangles in the animation), where the charged particles acquire kinetic energy and get accelerated along the magnetic field. The further these resonant locations are, the more energy the ions acquire.

Such accelerated ions are then beamed back to Earth, from the magnetic equator towards the poles, in a kind of elongated parabolic flight along terrestrial magnetic field lines.

Statistical studies based on Cluster measurements showed that the beams last about 10 to 15 minutes, and they extend between 1300 and 4500 km.

“Such results are possible only with missions like Cluster that, with multi-point observations lasting over several years, make it possible to accumulate a large amount of data and bridge observations with theory,” says Philippe Escoubet, Project Scientist for Cluster and Double Star at ESA. “This is the only way to enhance our knowledge of the highly dynamic magneto-tail region.”

The results were obtained thanks to measurements of the Cluster Ion Spectrometry instrument onboard each satellite.

The results appear in two papers:
‘Spatial Temporal characteristics of ion beamlets in the plasma sheet boundary layer of magnetotail’, by E. Grigorenko et al, published in the Journal of Geophysical Research on 24 May 2007.

‘Multiplet structure of acceleration processes in the distant magnetotail’, by L. Zelenyi et al, published in the Geophysical Research Letters in 2006.

The theory, now confirmed by Cluster, was published in 1993 by M. Ashour-Abdalla et al., and predicted a universal scaling law for the velocity ratio of ion beams accelerated at distinct spatial sites in the magnetotail.