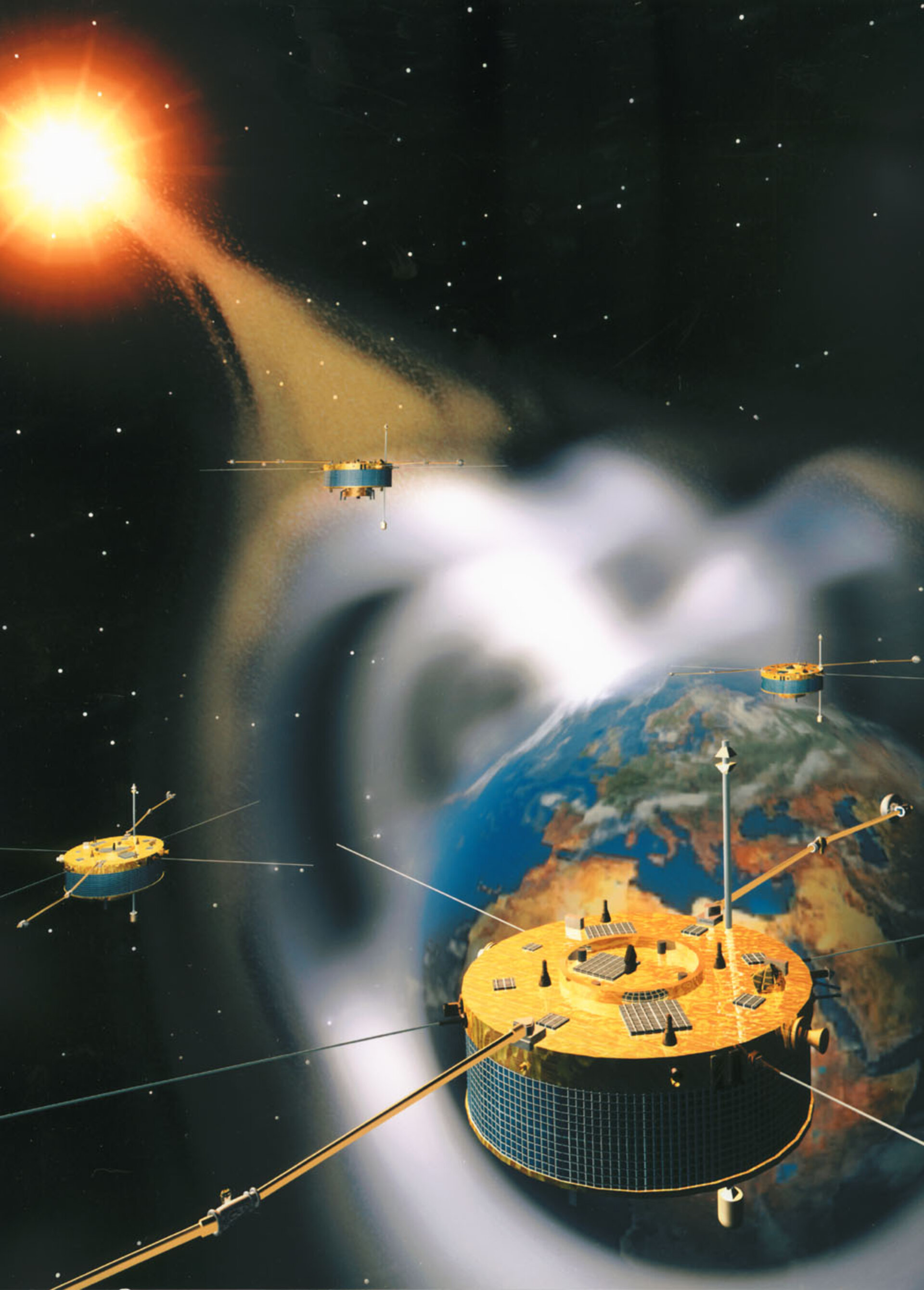 Space scientists around the world are today celebrating the first anniversary of the European Space Agency's revolutionary Cluster mission to explore near-Earth space and study the interaction between the Sun and Earth.

This groundbreaking mission began exactly one year ago, on 16 July 2000, when two of the four Cluster spacecraft were launched from Baikonur Cosmodrome in Kazakhstan. Within a month, a second pair of identical satellites joined them in similar orbits that pass over the Earth's poles.

After the most complex period of spacecraft commissioning ever undertaken for any space mission - including the verification and testing of 44 separate instruments and 64 boom deployment sequences - full scientific operations started on 1 February 2001.

Since then, the Cluster quartet has been carrying out the most comprehensive exploration of the Earth's environment ever undertaken. For the first time, scientists have been able to explore the magnetosphere - the magnetic bubble that surrounds the Earth - with a flotilla of four identical spacecraft.

"Although Cluster has only been fully operational for five months, we have already gathered a huge amount of new information about the Sun - Earth connection," said Professor David Southwood, ESA Director of Science. "More than 200 scientists around the world are currently analysing this remarkable treasure trove of data."

"It has been a very challenging, but satisfying year," said Philippe Escoubet, Cluster project scientist. "Cluster is a completely new type of scientific mission, so it took us a while to find out how to get the best out of the satellites and their suite of instruments. Now we are receiving exciting new information about the magnetosphere and making new discoveries all the time."

By flying in a close, tetrahedral (lop-sided pyramid) formation, the four spacecraft have provided scientists with their first small-scale, three-dimensional views of near-Earth space.

"Cluster's new three-dimensional 'picture' of the magnetosphere is rather like looking at photos of an old familiar scene, but instead of the dull black-and-white pictures, we now have the same view in brilliant colours," said Professor André Balogh of Imperial College, London, principal investigator for the FGM experiment on Cluster.

Like a spacecraft orbiting another world, our Earth is trapped on an everlasting journey around the Sun. During its eternal voyage, Spaceship Earth is continuously exposed to the solar wind, a perpetual blast of plasma (electrically charged particles) sweeping outwards from our nearest star.

Fortunately for us, the Earth is protected by a powerful magnetic field which forces the supersonic solar wind to sweep around the planet. In the process, the magnetic field is shaped into a gigantic teardrop that typically extends approximately 65 000 km towards the Sun and more than two million km - five times the distance to the Moon - in the opposite direction.

However, a continuous struggle for supremacy rages as gusts in the solar wind cause the magnetosphere to balloon in and out. The fluctuating fortunes of the magnetic field are monitored by the Cluster flotilla as it flies through different regions of this unpredictable teardrop - the bow shock, the magnetopause, the cusps and the tail.

On the sunward side of the Earth lies the bow shock, where particles of the solar wind slam into the magnetosphere at a speed of about 400 km/s (around 1.5 million km per hour). This creates an enormous shock wave similar to a sonic boom ahead of a supersonic aircraft.

The new three-dimensional view from Cluster reveals a fast-moving, complex surface, in contrast to the motionless snapshots, frozen in time, provided by previous spacecraft measurements. During their encounters with the bow shock, the Cluster satellites have found that this turbulent boundary moves through space at 5 to 6 km/s (about the same speed that the International Space Station travels around the Earth).

Cluster has also provided the first confirmation of waves along the magnetopause - the outer limit of Earth's magnetic field. Until now, these plasma waves have only existed in computer simulations, but the Cluster spacecraft have surfed these waves and confirmed their existence. The speed of the waves has been estimated at around 70 km/s - equivalent to travelling from London to Paris in 4.5 seconds.

One of the real surprises concerned the polar cusps - 'windows' above the northern and southern polar regions where the particles from the solar wind can penetrate the magnetic shield. These cusps rapidly shift position due to gusts in the solar wind. The Cluster quartet has shown that they pivot through space at between 10 and 30 km/s - the first time this motion has been directly measured by spacecraft.

Closer to Earth, the mini-armada has flown through the plasmasphere - a doughnut-shaped region of dense plasma, mostly electrons and protons, that lies between the Earth's two magnetic poles. By flying in formation through the narrow part of the doughnut, Cluster has provided the best data yet on its complex ingredients of particles, electric and magnetic fields.

Radio signals from lightning, auroras (the curtains of red and green light that illuminate the polar skies) and particles that are trapped in the Earth's radiation belts have also been detected by Cluster. The new data are enabling scientists to find out where these signals originate and how they travel through near-Earth space.

Most dramatic of all have been the Cluster observations of solar storms. With the Sun now at maximum activity in its 11 year cycle, numerous powerful sunstorms are expected to occur. When one of the biggest solar storms on record began on 8 November 2000, instruments on Cluster were used to monitor the dramatic changes around Spaceship Earth.

About 8 minutes after a huge cloud of hot gas, known as a Coronal Mass Ejection (CME), was blasted from the Sun, the WHISPER instrument on Cluster detected an intense radio emission. Several days later, when the CME arrived at the Earth, it punched into the magnetosphere, pushing the magnetic shield toward the planet and leaving the Cluster spacecraft exposed to the solar wind, where they stayed for many hours.

The latest chapter in Cluster's exciting exploration began in June, when ESA's intrepid flotilla began to explore the elongated magnetotail which stretches far beyond the Moon. During the next few months, Cluster will cast new light on this region where storms of high energy particles are generated. When these particles arrive at the Earth, they can cause intense auroras on the nightside of the Earth. A less attractive consequence is their ability to cause power cuts, damage satellites and disrupt communications.

"Cluster will provide us with a mass of new information about what takes place inside this magnetic 'power station' and help us to find out what generates such surges of energetic particles," said Dr. Escoubet.

"As we pass Cluster's first launch anniversary, we are all looking forward to even more exciting results in the months ahead," he added. "The best is yet to come."