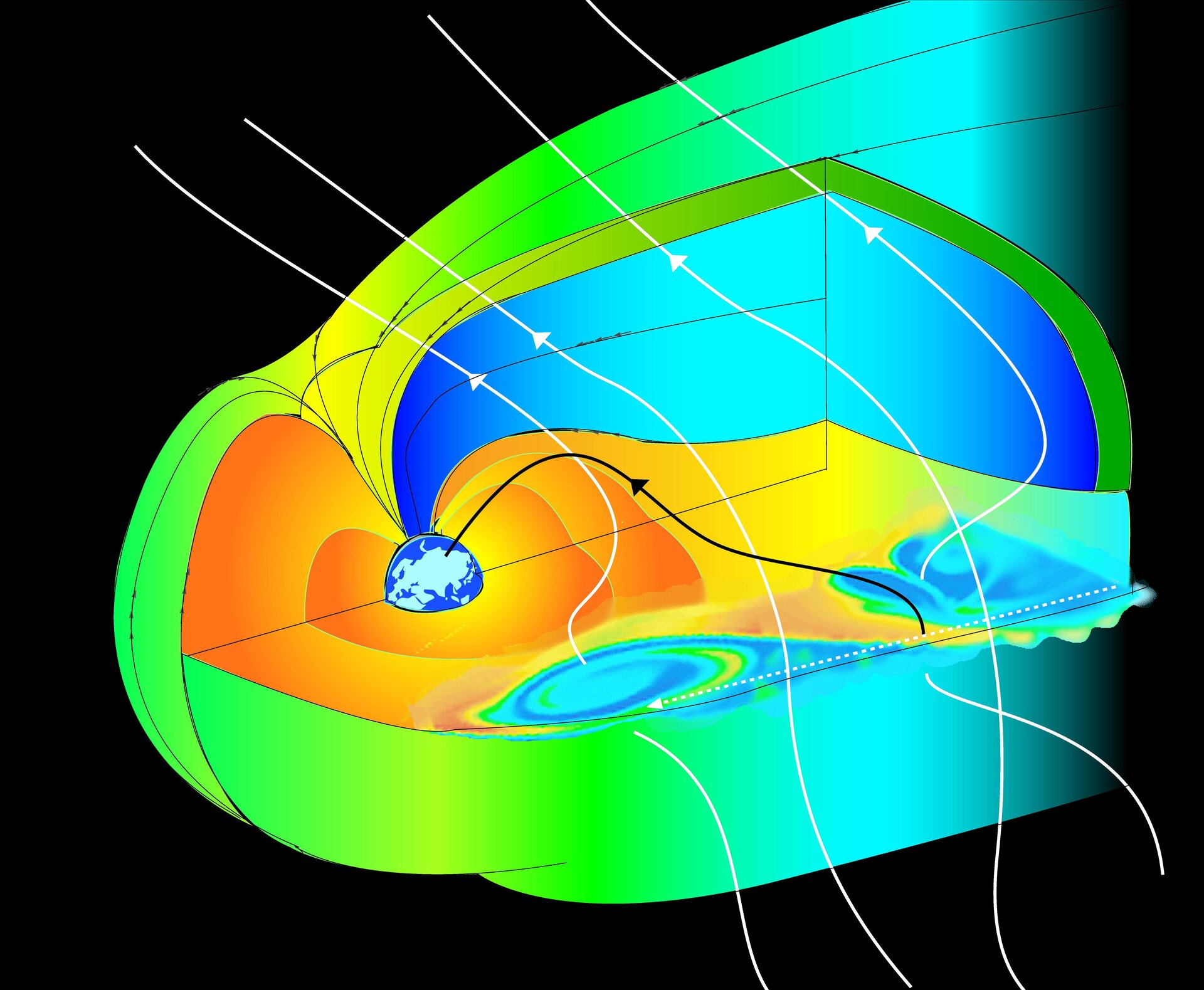 ESA’s quartet of space-weather watchers, Cluster, has discovered vortices of ejected solar material high above the Earth. The superheated gases trapped in these structures are probably tunnelling their way into the Earth’s magnetic ‘bubble’, the magnetosphere. This discovery possibly solves a 17-year-mystery of how the magnetosphere is constantly topped up with electrified gases when it should be acting as a barrier.

When the two fields point in opposite directions, scientists understand how ‘doors’ in Earth’s field can open. This phenomenon, called ‘magnetic reconnection’, allows the solar wind to flow in and collect in the reservoir known as the boundary layer. On the contrary, when the fields are aligned they should present an impenetrable barrier to the flow. However, spacecraft measurements of the boundary layer, dating back to 1987, present a puzzle because they clearly show that the boundary layer is fuller when the fields are aligned than when they are not. So how is the solar wind getting in?

Thanks to the data from the four formation-flying spacecraft of ESA’s Cluster mission, scientists have made a breakthrough. On 20 November 2001, the Cluster flotilla was heading around from behind Earth and had just arrived at the dusk side of the planet, where the solar wind slides past Earth’s magnetosphere. There it began to encounter gigantic vortices of gas at the magnetopause, the outer ‘edge’ of the magnetosphere.

“These vortices were really huge structures, about six Earth radii across,” says Hiroshi Hasegawa, Dartmouth College, New Hampshire who has been analysing the data with help from an international team of colleagues. Their results place the size of the vortices at almost 40 000 kilometres each, and this is the first time such structures have been detected.

These vortices are known as products of Kelvin-Helmholtz instabilities (KHI). They can occur when two adjacent flows are travelling with different speeds, so one is slipping past the other. Good examples of such instabilities are the waves whipped up by the wind slipping across the surface of the ocean. Although KHI-waves had been observed before, this is the first time that vortices are actually detected.

Scientists had postulated that, if these structures were to form at the magnetopause, they might be able to pull large quantities of the solar wind inside the boundary layer as they collapse. Once the solar wind particles are carried into the inner part of the magnetosphere, they can be excited strongly, allowing them to smash into Earth’s atmosphere and give rise to the aurorae.

Cluster’s discovery strengthens this scenario but does not show the precise mechanism by which the gas is transported into Earth’s magnetic bubble. Thus, scientists still do not know whether this is the only process to fill up the boundary layer when the magnetic fields are aligned. For those measurements, Hasegawa says, scientists will have to wait for a future generation of magnetospheric satellites.