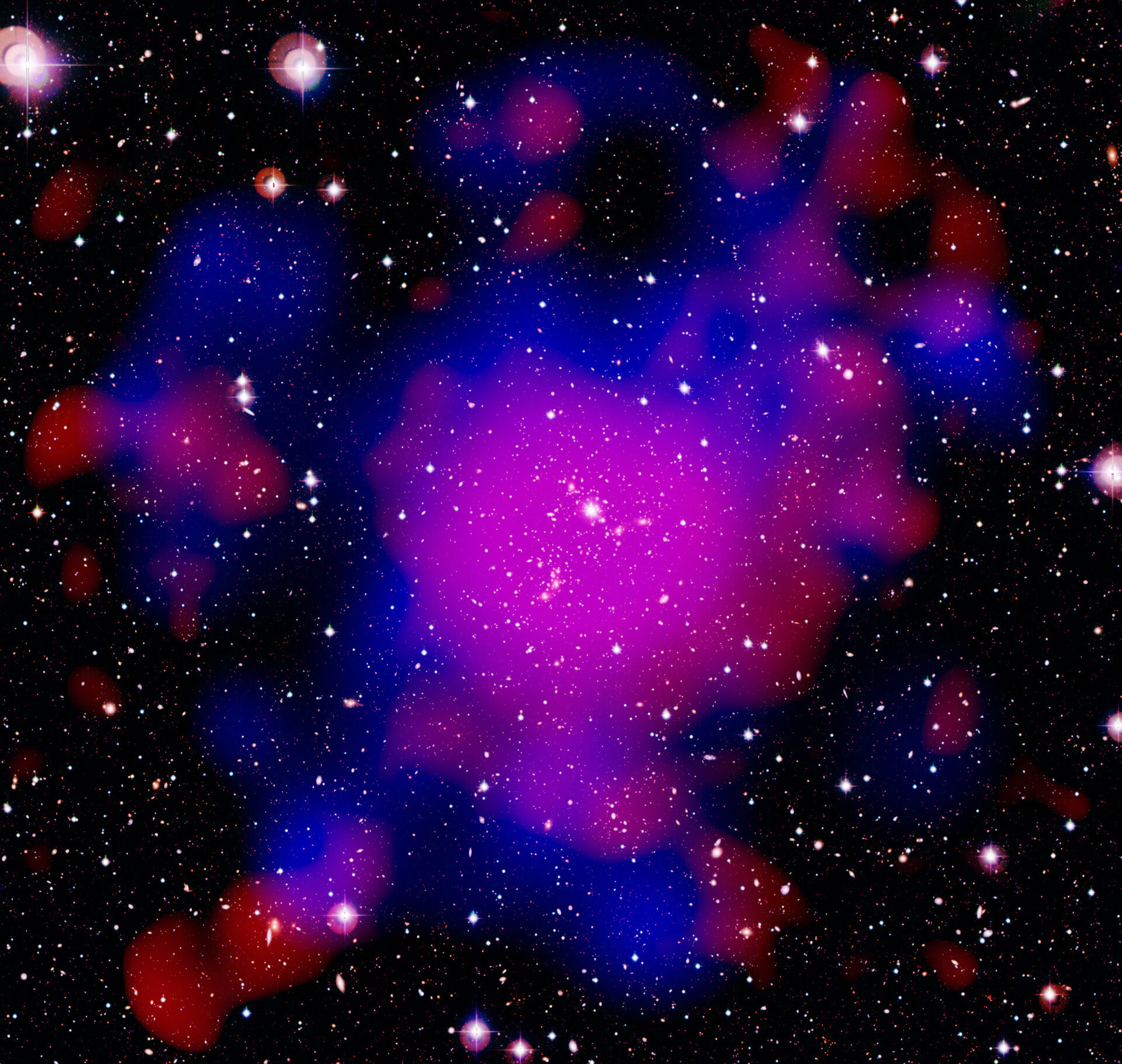 ESA’s XMM-Newton X-ray observatory has revealed three massive filaments of hot gas flowing towards a cluster of galaxies, uncovering a portion of the cosmic skeleton that pervades the entire Universe.

Galaxies tend to congregate, forming groups and even larger agglomerates called clusters. These clusters are the most massive cosmic structures held together by gravity. As well as galaxies, they contain large amounts of hot gas and even larger amounts of invisible dark matter.

On a grander scale, galaxies and galaxy clusters appear to be linked in a gigantic filamentary network, with the most massive clusters sitting in the densest hubs of this ‘cosmic web’.

Computer simulations indicate that the cosmic web, which consists primarily of dark matter and some ordinary matter, behaves as the scaffolding of the cosmos, providing the framework for stars, galaxies and clusters to form and evolve.

In the past few decades, astronomers have detected the threadlike structure of the cosmic web in the large-scale distribution of galaxies, and found hints that diffuse gas is arranged in a similar way.

A new study using ESA’s XMM-Newton X-ray observatory has now uncovered a handful of filaments made of galaxies, gas and dark matter that are flowing towards one of the most massive galaxy clusters in the Universe, obtaining the first, unambiguous detection of gas in the cosmic web.

“This was an unexpected and most welcome discovery,” says Dominique Eckert of the University of Geneva, Switzerland, lead author of the paper reporting the new results in the journal Nature this week.

The object of the study is Abell 2744, which has been nicknamed the Pandora Cluster owing to its complex and jumbled structure. It is composed of at least four smaller components that are merging.

“We knew that this is an incredibly massive cluster hosting active processes at its core, and seeing its direct connection to the cosmic web confirms our picture of how structures form in the Universe,” adds Dr Eckert.

From 30 hours of observations by XMM-Newton in December 2014, the astronomers detected five large structures of hot gas that seem to be linked to the core of Abell 2744.

Comparing the X-ray data with optical observations, they identified the galaxies that belong to the various filaments, recognising that three of them are physically connected to the cluster, while the other two are the projection of more distant structures viewed along the same line of sight.

Just like the cluster, the filaments also contain plenty of dark matter. The astronomers have reconstructed its distribution by studying the ‘gravitational lensing’ effect that the mass of the cluster and filaments exerts on distant galaxies, modifying the path of their light and so increasing their brightness and twisting their shapes as seen by us.

“We initially looked at the inner core of Abell 2744 with the Hubble Space Telescope, with the aim of using the cluster as a strong magnifying lens to detect background galaxies that would be otherwise too faint to observe,” explains co-author Mathilde Jauzac from the University of Durham, UK.

“After the discovery of X-ray gas in these filaments, we decided to look at the gravitational lensing effect also in the outskirts of the cluster, where background galaxies are only weakly distorted and magnified, but still enable us to study the dark matter distribution near the cluster as well as in the nearby filaments.”

The combination of observations at different wavelengths revealed how the various components of Abell 2744 and its surroundings coexist.

The gas and galaxies in the filaments amount to about a tenth of the total mass – the rest being dark matter – which also agrees with expectations.

While the measurements match well with the astronomers' theoretical scenario, caution is always in order when drawing conclusions about the Universe as a whole.

“What we observed is a very special configuration of dense filaments close to an exceptionally massive cluster. We need a much larger sample of less-dense filaments to investigate the nature of the cosmic web in greater detail,” says Dr Eckert.

For more in-depth investigations, astronomers will have to wait for ESA’s Athena X-ray telescope, planned for launch in 2028. Athena’s extraordinary sensitivity will make it possible to survey hot gas in the cosmic web across the sky, detecting faint and diffuse filaments and even identifying some of the atomic elements in the gas.

“With the discovery of filaments around Abell 2744, we are witnessing the build-up of the cosmic web in one of the busiest places in the known Universe, a crucial step in the study of the formation of galaxies and galaxy clusters,” says Norbert Schartel, ESA XMM-Newton Project Scientist.

“Warm-hot baryons comprise 5–10 per cent of filaments in the cosmic web,” by D. Eckert et al. is published in the 3 December 2015 issue of the journal Nature.

This work is based on X-ray data collected with ESA's XMM-Newton X-ray observatory and on optical observations from the NASA/ESA Hubble Space Telescope, the Canada–France–Hawaii Telescope and the European Southern Observatory’s 2.2 m-diameter telescope.