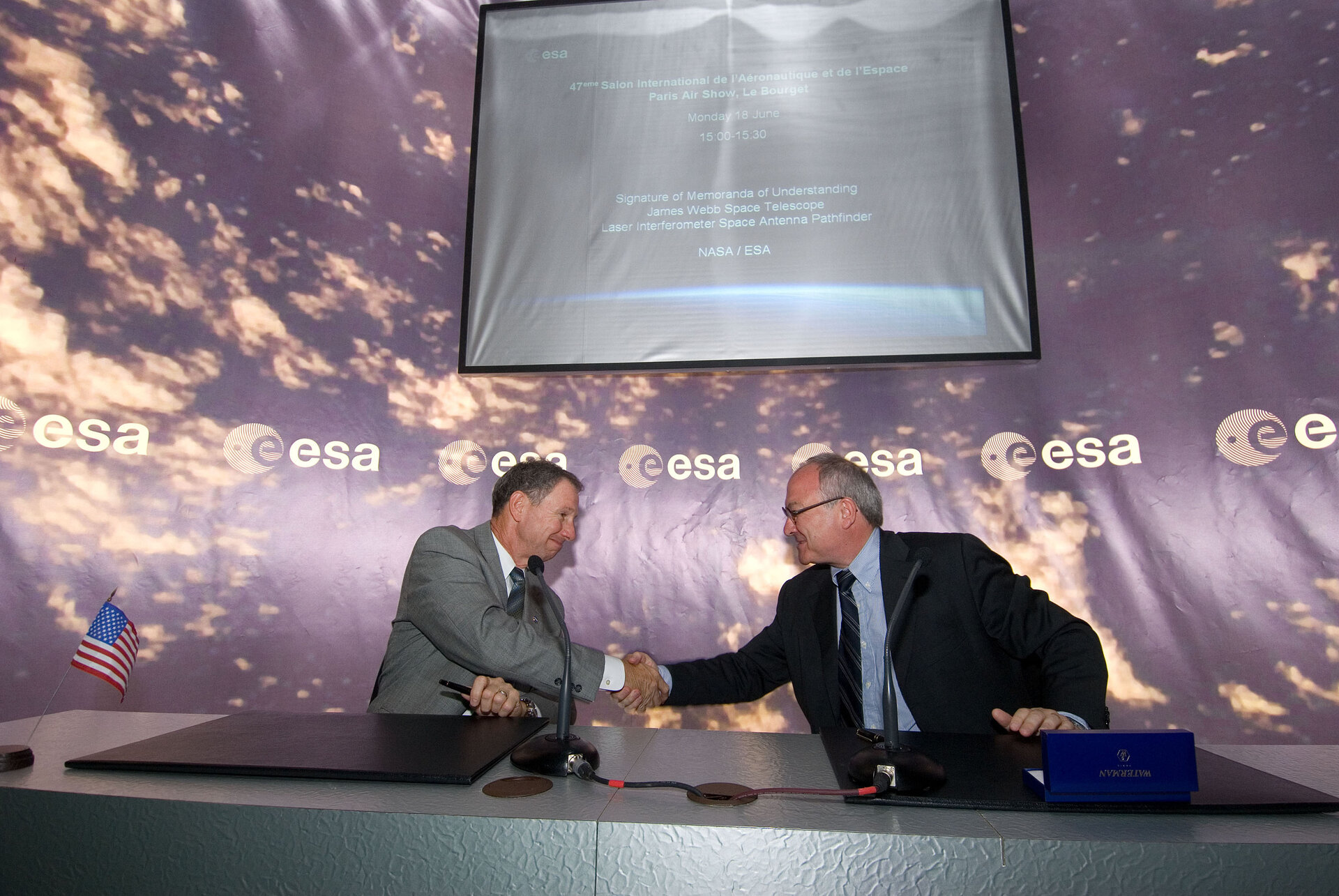 ESA PR 25-2007. At a ceremony that took place today at the Paris Air Show at Le Bourget, ESA Director General Jean-Jacques Dordain and NASA Administrator Michael Griffin signed the official agreements that define the terms of the cooperation on the James Webb Space Telescope (JWST) and on the Laser Interferometer Space Antenna (LISA) Pathfinder mission.

JWST is a mission involving international cooperation between NASA, ESA and the Canadian Space Agency (CSA) to investigate the origin and evolution of galaxies, stars and planetary systems.

Although optimised to operate over a different range of wavelengths, JWST is considered to be the successor of the Hubble Space Telescope. It is due for launch in 2013 and will operate for at least five years.

At the heart of the JWST observatory is a large telescope whose primary mirror measures 6.5 metres in diameter (compared to 2.4 metres for Hubble), providing a relatively large field of view.

A set of four sophisticated instruments (including a fine guidance sensor for precision pointing) will combine a superb imaging capability at visible and infrared wavelengths together with various spectroscopic modes to learn more about the chemistry and evolution of the objects populating our universe.

JWST will be operated well outside the Earth’s atmosphere at a point in deep space called the ‘second Lagrangian point’ (L2), located at 1.5 million kilometres in the direction opposite to the sun. From that location, this powerful space observatory promises to revolutionise our view of the cosmos yet again - just as Hubble did.

Under the agreement, NASA - responsible for the overall management and operations of the JWST mission - builds the spacecraft, the telescope and the platform that will host the instruments. ESA will provide the launch with an Ariane 5 ECA rocket.

NASA will also provide one major instrument, the Near-Infrared Camera (NIRCam), via the University of Arizona. ESA will provide the Near-Infrared spectrograph (NIRSpec) operating over similar wavelengths, with the detectors and slit selector device provided by NASA.

A third onboard instrument, the Mid-Infrared Instrument (MIRI), is being built by a consortium of nationally-funded European institutions (responsible for the MIRI optical assembly) and NASA, with coordination via ESA. The fourth onboard instrument, the Fine Guidance Sensor/Tuneable Filter Imager (FGS/TFI), will be provided by the CSA.

“The signing of this agreement on the JWST, based on longstanding and consolidated cooperation between ESA and NASA, will once again make history,” said Jean-Jacques Dordain. “In particular, we are very proud to use Ariane 5 to put this great observatory into space.”

“The Hubble Space Telescope has paved the way for such cooperation, with Europe’s astronomers continuing to play their full part in the exploitation of Hubble’s observing time,” Dordain added.

“This Europe/US synergy has enhanced Hubble’s scientific return and provided mutual benefits. I am confident that the ESA/NASA collaboration on JWST will match, if not exceed, the results of our previous joint efforts,” Mr. Dordain concluded.

"We're delighted to have ESA's participation on the James Webb Space Telescope," said NASA Administrator Michael Griffin. "The tremendous scientific success of the Hubble Space Telescope can be attributed to the cooperative efforts between our two agencies. We expect that, as Hubble's successor, the James Webb Telescope also will make profound astronomical observations and discoveries. When it does, we can be proud that it too is a project based on international cooperation."

At today’s signing ceremony, the heads of the two agencies also signed an official agreement on the ESA-initiated Laser Interferometer Space Antenna (LISA) Pathfinder mission, currently due for launch in early 2010. LISA Pathfinder is aimed at demonstrating the technologies needed for the planned future joint ESA/NASA LISA mission to detect gravitational waves in space and test the theory of General Relativity.

Under this agreement, ESA will design, develop, launch and operate the LISA Pathfinder spacecraft. A consortium of European scientific institutes will provide the LISA Technology Package (LTP), consisting of two test masses in near-perfect gravitational free-fall and a sophisticated system to measure and control their motion with unprecedented accuracy.

NASA will provide the Disturbance Reduction System Package. The DRS, which will make use of the LTP sensors and metrology capability, is also designed to test drag-free attitude control. The inclusion of both the LTP and DRS packages on board will make it possible to compare and assess the performance of the two types of actuator and relevant software, in preparation for LISA.