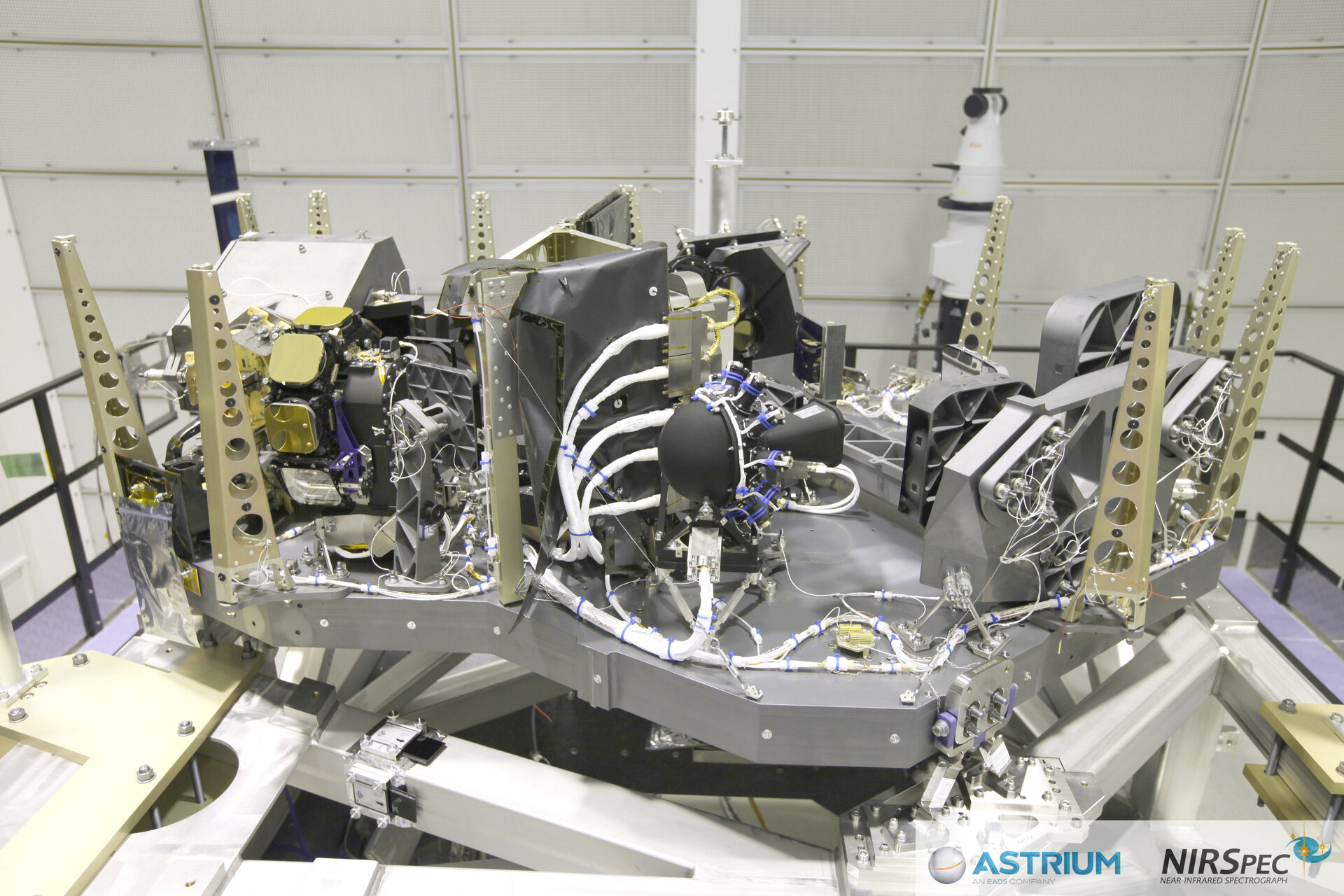 ESA has completed the Near-Infrared Spectrograph, one of two instruments it is contributing to the international James Webb Space Telescope, a space observatory set for launch on an Ariane 5 rocket in 2018.

The James Webb Space Telescope, or JWST, is being built in a partnership between ESA, NASA and the Canadian Space Agency as the successor to the hugely successful Hubble space telescope.

It will boast a segmented primary mirror spanning a total of 6.5 m in diameter, making it the largest astronomical telescope in space. This mirror will feed light to four state-of-the art science instruments, including the Near-Infrared Spectrograph, or NIRSpec, which has been built for ESA by Astrium GmbH in Germany.

NIRSpec is designed to detect the light from the first stars and galaxies that formed in the young Universe, roughly 400 million years after the Big Bang, a time when conditions were very different to today, some 13.8 billion years later.

It will split the infrared light from these objects into its colour components – a spectrum – providing scientists with vital information on their chemical composition, dynamical properties, age and distance. NIRSpec will be able to observe up to 100 such objects simultaneously.

A very versatile instrument, NIRSpec will also be used to study the early phases of stellar birth across our Milky Way galaxy, and to analyse the atmospheric properties of planets in orbit around other stars, assessing the potential for life on worlds elsewhere in the Universe.

“The formal handover of NIRSpec from Astrium to ESA marks an important and exciting milestone in Europe’s contribution to the JWST mission,” said Alvaro Giménez, ESA’s Director of Science and Robotic Exploration, speaking at a ceremony held today at Astrium GmbH in Ottobrunn, Germany.

“Along with the delivery of the Mid-Infrared camera and spectrograph (MIRI) to NASA last year, we are thrilled that European engineers and scientists are playing a key role in this important international mission.”

Having undergone rigorous testing in Europe, NIRSpec will be shipped to NASA later this month for integration into JWST’s instrument module, followed by further testing and calibration as the whole observatory is built up.

“We are delighted to acknowledge the completion of ESA’s NIRSpec and excited to have it join the other Webb science instruments at NASA’s Goddard Space Flight Center,” said Eric Smith, NASA’s Acting Program Director for JWST.

Once completed, JWST is scheduled for launch in 2018 on Ariane 5 from Europe’s Spaceport in Kourou, French Guiana. It will then be positioned 1.5 million kilometres beyond Earth’s orbit around the Sun, around the gravitationally stable point known as L2. There, the observatory and instruments will cool behind a giant sunshield to temperatures below –233°C and carry out scientific observations for up to 10 years.

“NIRSpec's completion takes us one step closer to fulfilling JWST’s science goals and answering outstanding questions in astrophysics, such as how the first galaxies and stars formed and evolved,” says Peter Jensen, ESA’s JWST Project Manager.

JWST and its instrument suite are optimised for observing infrared light to study the light coming from distant galaxies or to pierce through the veil of dust surrounding some objects like infant stars.

Free of the influence of Earth’s atmosphere, kept in the dark and cold behind a sunshield the size of a tennis court and orbiting 1.5 million kilometres beyond Earth’s orbit around the Sun, JWST and its instrument suite will achieve unprecedented sensitivity levels.

NIRSpec will operate over a wavelength range of 0.6–5 microns, spanning the red end of the visible to the near-infrared. It has been built by European industry under the management of the ESA JWST Project at ESTEC in the Netherlands. The prime contractor is Astrium GmbH in Ottobrunn, Germany and the NIRSpec detector and micro-shutter subsystems are provided by NASA’s Goddard Space Flight Center.