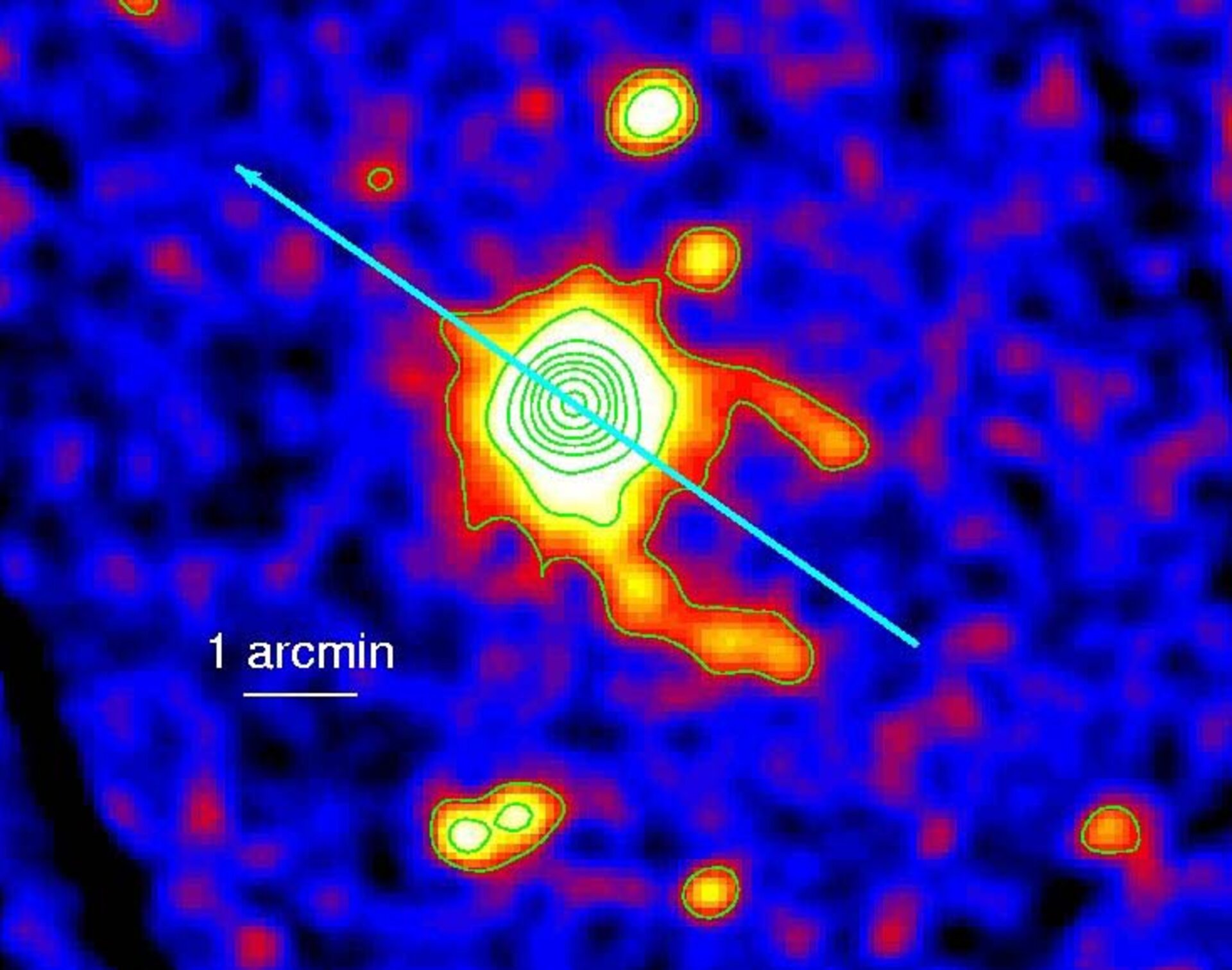 Astronomers using ESA’s X-ray observatory, XMM-Newton, have discovered a pair of X-ray tails, stretching 3 million million kilometres across the sky. They emanate from the mysterious neutron star known as Geminga. The discovery gives astronomers new insight into the extraordinary conditions around the neutron star.

A neutron star measures only 20-30 kilometres across and is the dense remnant of an exploded star. Geminga is one of the closest to Earth, at a distance of about 500 light-years. Most neutron stars emit radio emissions, appearing to pulsate like a lighthouse, but Geminga is 'radio-quiet'. It does, however, emit huge quantities of pulsating gamma rays making it one of the brightest gamma-ray sources in the sky. Geminga is the only example of a successfully identified gamma-ray source from which astronomers have gained significant knowledge.

It is 350 000 years old and ploughs through space at 120 kilometres per second. Its route creates a shockwave that compresses the gas of the interstellar medium and its naturally embedded magnetic field by a factor of four.

Patrizia Caraveo, Instituto di Astrofisica Spaziale e Fisica Cosmica, Milano, Italy, and her colleagues (at CESR, France, ESO and MPE, Germany) have calculated that the tails are produced because highly energetic electrons become trapped in this enhanced magnetic field. As the electrons spiral inside the magnetic field, they emit the X-rays seen by XMM-Newton.

The electrons themselves are created close to the neutron star. Geminga’s breathless rotation rate – once every quarter of a second – creates an extraordinary environment in which electrons and positrons, their antimatter counterparts, can be accelerated to extraordinarily high energies. At such energies, they become powerful high-energy gamma-ray producers. Astronomers had assumed that all the electrons would be converted into gamma rays. However, the discovery of the tails proves that some do find escape routes from the maelstrom.

“It is astonishing that such energetic electrons succeed in escaping to create these tails,” says Caraveo, “The tail electrons have an energy very near to the maximum energy achievable in the environment of Geminga.”

The tails themselves are the bright edges of the three-dimensional shockwave sculpted by Geminga. Such shockwaves are a bit like the wake of a ship travelling across the ocean. Using a computer model, the team has estimated that Geminga is travelling almost directly across our line of sight.

Studies of Geminga could not be more important. The majority of known gamma-ray sources in the Universe have yet to be identified with known classes of celestial objects. Some astronomers believe that a sizeable fraction of them may be Geminga-like radio-quiet neutron stars. Certainly, the family of radio-quiet neutron stars, discovered through their X-ray emission, is continuously growing. Currently, about a dozen objects are known but only Geminga has a pair of tails!