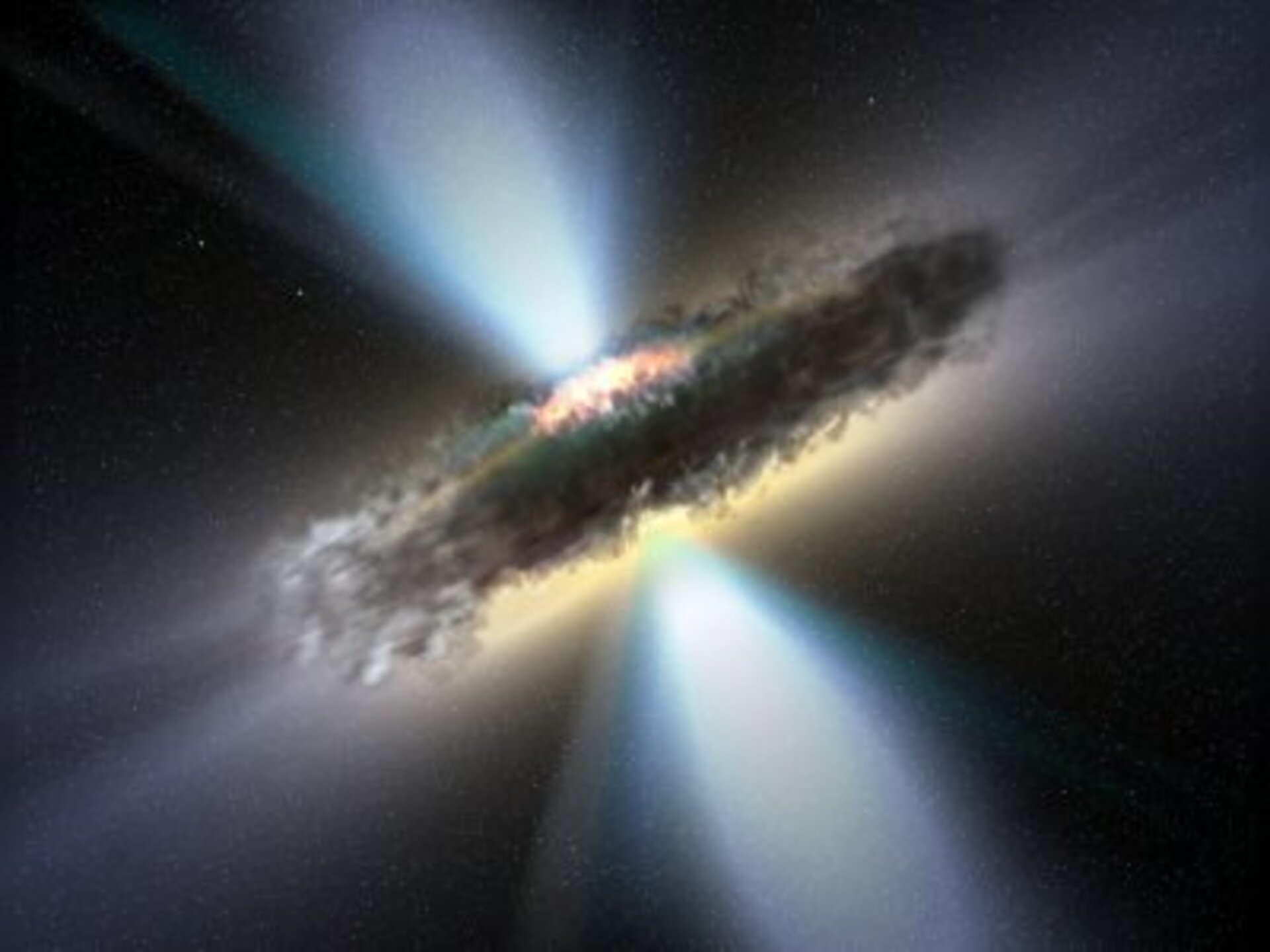 Using ESA’s Integral and XMM-Newton observatories, an international team of astronomers has found more evidence that massive black holes are surrounded by a doughnut-shaped gas cloud, called a torus. Depending on our line of sight, the torus can block the view of the black hole in the centre. The team looked `edge on’ into this doughnut to see features never before revealed in such a clarity.

Black holes are objects so compact and with gravity so strong that not even light can escape from them. Scientists think that `supermassive’ black holes are located in the cores of most galaxies, including our Milky Way galaxy. They can contain the mass of thousands of millions of suns, confined within a region no larger than our Solar System. They appear to be surrounded by a hot, thin disk of accreting gas and, farther out, the thick doughnut-shaped torus.

Depending on the inclination of the torus, it can hide the black hole and the hot accretion disc from the line of sight. Galaxies in which a torus blocks the light from the central accretion disc are called `Seyfert 2’ types and are usually faint to optical telescopes. Another theory, however, is that these galaxies appear rather faint because the central black hole is not actively accreting gas and the disc surrounding it is therefore faint.

An international team of astronomers led by Dr Volker Beckmann, Goddard Space Flight Center (Greenbelt, USA) has studied one of the nearest objects of this type, a spiral galaxy called NGC 4388, located 65 million light years away in the constellation Virgo. Since NGC 4388 is relatively close, and therefore unusually bright for its class, it is easier to study.

Astronomers often study black holes that are aligned face-on, thus avoiding the enshrouding torus. However, Beckmann's group took the path less trodden and studied the central black hole by peering through the torus. With XMM-Newton and Integral, they could detect some of the X-rays and gamma rays, emitted by the accretion disc, which partially penetrate the torus. "By peering right into the torus, we see the black hole phenomenon in a whole new light, or lack of light, as the case may be here," Beckmann said.

Beckmann's group saw how different processes around a black hole produce light at different wavelengths. For example, some of the gamma rays produced close to the black hole get absorbed by iron atoms in the torus and are re-emitted at a lower energy. This in fact is how the scientists knew they were seeing `reprocessed’ light farther out. Also, because of the line of sight towards NGC 4388, they knew this iron was from a torus on the same plane as the accretion disk, and not from gas clouds `above’ or `below’ the accretion disk.

This new view through the haze has provided valuable insight into the relationship between the black hole, its accretion disc and the doughnut, and supports the torus model in several ways.

Gas in the accretion disc close to the black hole reaches high speeds and temperatures (over 100 million degrees, hotter than the Sun) as it races toward the void. The gas radiates predominantly at high energies, in the X-ray wavelengths.

According to Beckmann, this light is able to escape the black hole because it is still outside of its border, but ultimately collides with matter in the torus. Some of it is absorbed; some of it is reflected at different wavelengths, like sunlight penetrating a cloud; and the very energetic gamma rays pierce through. "This torus is not as dense as a real doughnut or a true German Krapfen, but it is far hotter - up to a thousand degrees - and loaded with many more calories," Beckmann said.

The new observations also pinpoint the origin of the high-energy emission from NGC 4388. While the lower-energy X-rays seen by XMM-Newton appear to come from a diffuse emission, far away from the black hole, the higher-energy X-rays detected by Integral are directly related to the black hole activity.

The team could infer the doughnut’s structure and its distance from the black hole by virtue of light that was either reflected or completely absorbed. The torus itself appears to be several hundred light years from the black hole, although the observation could not gauge its diameter, from inside to outside.

The result marks the clearest observation of an obscured black hole in X-ray and gamma-ray `colours’, a span of energy nearly a million times wider than the window of visible light, from red to violet. Multi-wavelength studies are increasingly important to understanding black holes, as already demonstrated earlier this year. In May 2004, the European project known as the Astrophysical Virtual Observatory, in which ESA plays a major role, found 30 supermassive black holes that had previously escaped detection behind masking dust clouds.

For more information about the Astrophysical Virtual Observatory programme and how it has allowed European scientists to discover a number of previously hidden black holes, see:

More information on Integral can be found at:

XMM-Newton can detect more X-ray sources than any previous observatory and is helping to solve many cosmic mysteries of the violent Universe, from black holes to the formation of galaxies.

It was launched on 10 December 1999, using an Ariane-5 rocket from French Guiana. It is expected to return data for a decade. XMM-Newton’s high-tech design uses over 170 wafer-thin cylindrical mirrors spread over three telescopes.

More information on XMM-Newton can be found at: