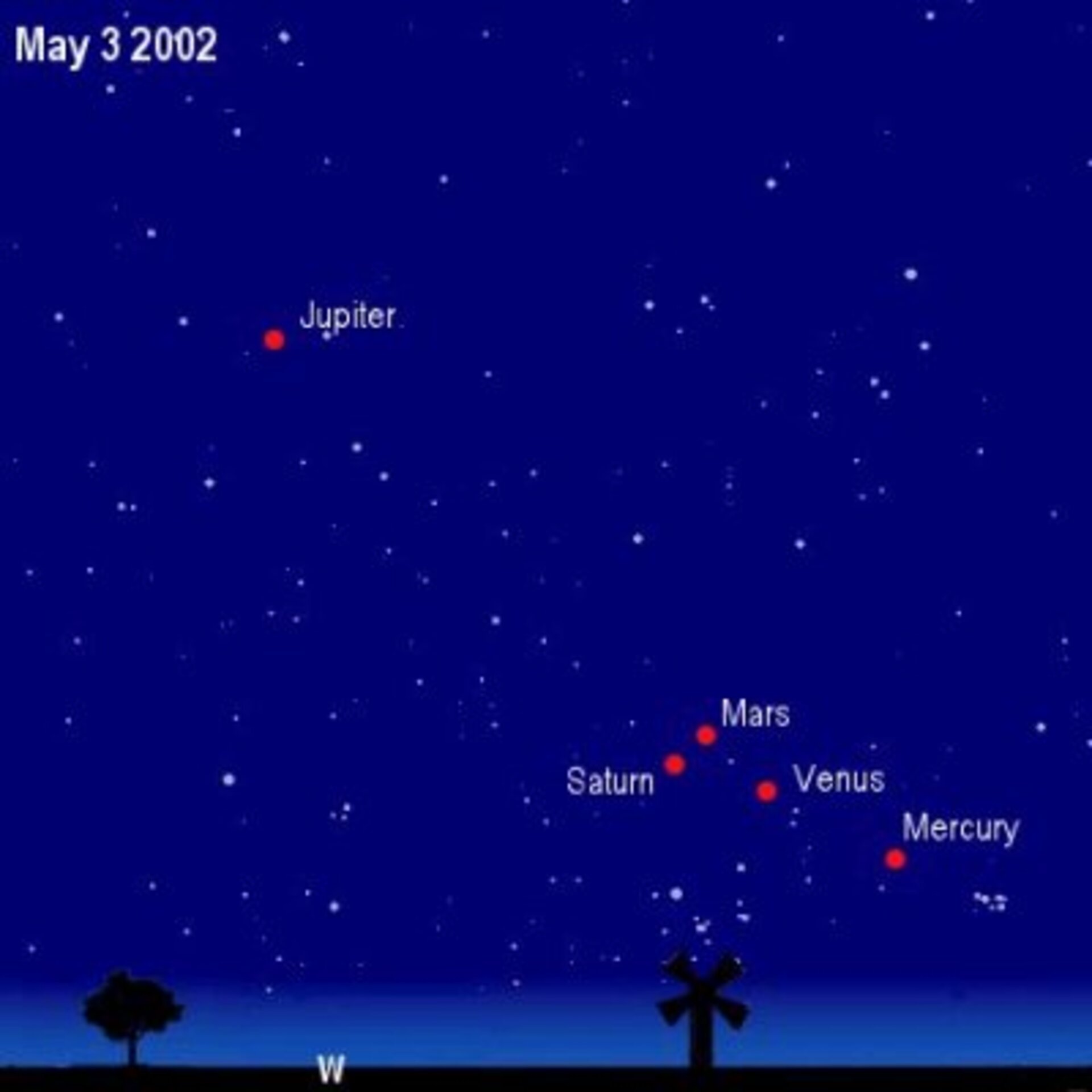 The next few weeks offer the chance of a lifetime to observe the five brightest planets appearing close together in the sky. Look to the west after sunset, and even an inexperienced watcher without a telescope will see the planets changing their relative positions in a slow dance from night to night. And you can take the opportunity to pick out the destinations of three, perhaps four, of ESA's interplanetary spacecraft.

Mars, the target for ESA's Mars Express, is relatively faint just now, but still distinctively reddish. The last week of April should be a good time to see it, bracketed between the brighter-looking Saturn and Venus. Launched in 2003, Mars Express will go into orbit around the Red Planet and examine it comprehensively with advanced instruments. It will also drop a lander, Beagle 2, to look for evidence of life.

The first few days of May will be the best time to spy Mercury. It's usually very hard to spot because it's so close to the Sun. The great Copernicus complained that he never saw Mercury, but you can do better than him if you have clear skies and avoid streetlights. Look for the planet around 3 May, down and to the right from bright Venus. Mercury is the destination for ESA's BepiColombo mission, due towards the end of the decade. It will try to find out why Mercury is very dense and unlike all the other planets. Because it's near the Sun, BepiColombo needs a lot of heat-proof technology.

Throughout the latter half of April and early May, Saturn, Jupiter and Venus will together dominate the evening scene. Saturn is where the NASA-ESA Cassini-Huygens joint mission will arrive in 2004. Launched in 1997, Cassini-Huygens set off by a roundabout route past Venus twice in 1998 and 1999, back via the Earth in 1999, and swinging by Jupiter in 2000. Early in 2005, ESA's Huygens probe will parachute onto Titan, Saturn's most fascinating moon, to look for new clues to how life began on the Earth. In contrast with BepiColombo's battle with the heat, Huygens' problem will be extreme cold.

Venus, the brightest of the planets, is under strong consideration by ESA for a project called Venus Express. If approved, the spacecraft will be based on Mars Express and use similar instruments. Unlike previous space missions, ESA's is intended to find out why the cloudy atmosphere of Venus is so different from the Earth's.

Notice the slanting line in the sky followed by the Sun as it sets in the west. Seen from Europe, it edges to the right as it goes down. After sunset, if you let your eye track back along the same line, up and to the left, you'll see the planets in a row.

In mid-April, Jupiter is high in the evening sky, but getting lower, while Mercury is out of sight near the Sun, coming higher. To understand why the five planets change their relative positions from night to night, think of them orbiting the Sun at different speeds. At present they are all on the far side of the Sun. In the evening, their orbits are carrying them upwards, while the Earth is moving downwards relative to the Sun.

Mercury and Venus orbit faster than the Earth. As a result they make progress upwards in the evening sky -- although Mercury will reverse after 3 May, when it comes towards the near side of the Sun. Mars, Jupiter and Saturn travel more slowly than we do, so the effect of our motion is to bring them down the evening sky, until eventually they'll pass behind the Sun.

While you're out looking for planets, you can try to spot ESA's big environmental satellite, Envisat moving quickly across the sky. Also the International Space Station, in which ESA participates. Full details of the predicted appearances of these satellites, seen from your home town, are available on the Heavens-Above website (see links). That website's star charts may help you with your planet spotting. It also tells you where to look for Comet Ikeya-Zhang, currently prowling in the northern sky.