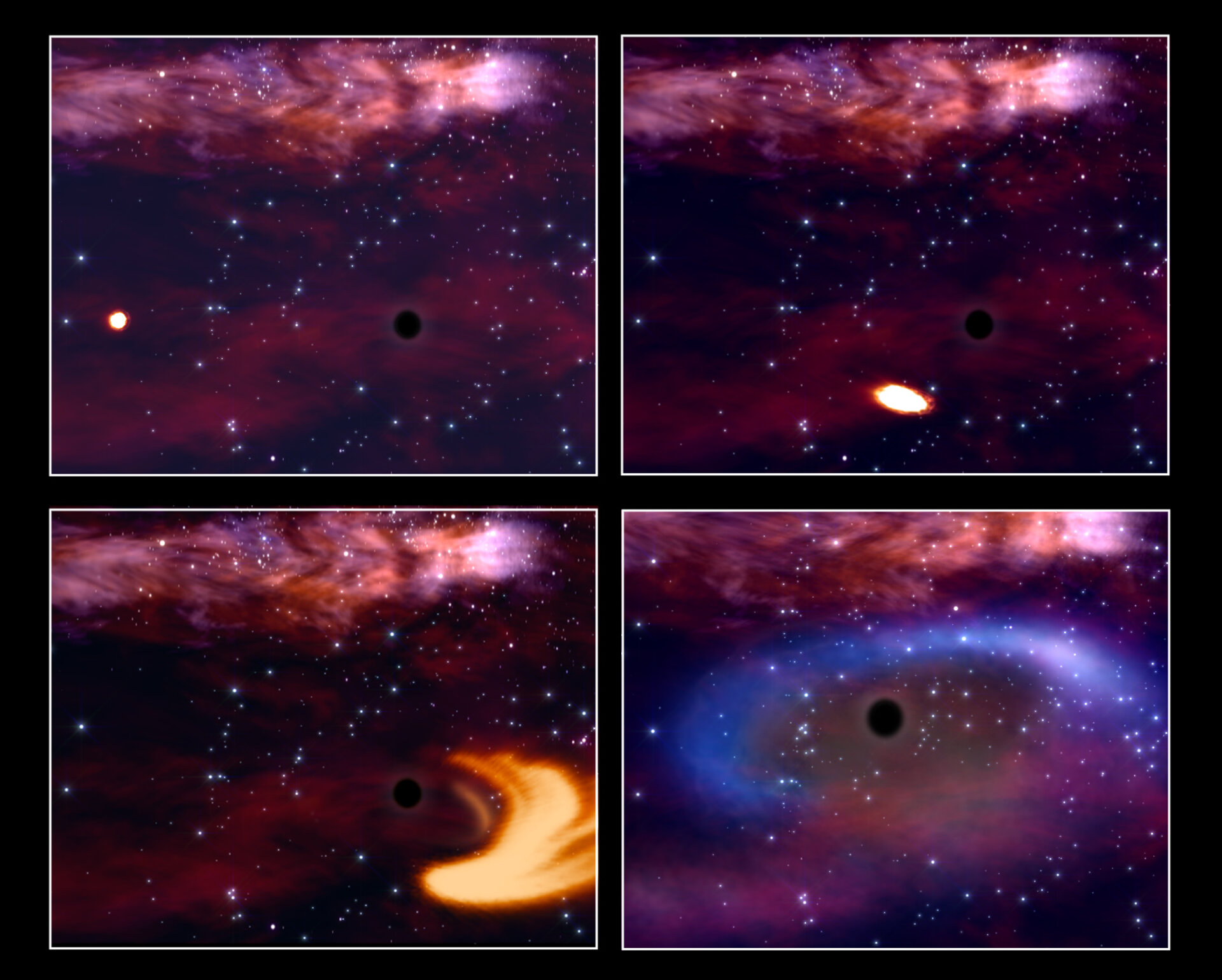 ESA PR 12-2004. A super-massive black hole has ripped apart a star and consumed a portion of it, according to data from ESA's XMM-Newton and NASA's Chandra X-ray observatories. These results are the best evidence yet that such a phenomenon, long predicted by theory, does actually happen.

Astronomers believe that a doomed star came too close to a giant black hole after a close encounter with another star threw it off course. As it neared the enormous gravity of the black hole, the star was stretched by tidal forces until it was torn apart. This discovery provides crucial information on how these black holes grow and affect the surrounding stars and gas.

"Stars can survive being stretched a small amount, as they are in binary star systems, but this star was stretched beyond its breaking point," said Dr Stefanie Komossa of the Max Planck Institute for Extraterrestrial Physics (MPE) in Germany, who led the international team of researchers. "This unlucky star just wandered into the wrong neighbourhood."

While other observations have hinted that stars are destroyed by black holes (events known as ‘stellar tidal disruptions’), these new results are the first strong evidence.

Observations with XMM-Newton and Chandra, combined with earlier images from the German Roentgensatellite (ROSAT), detected a powerful X-ray outburst from the centre of the galaxy RXJ1242-11.

This outburst, one of the most extreme ever detected in a galaxy, was caused by gas from the destroyed star that was heated to millions of degrees before being swallowed by the black hole. The energy liberated in this process is equivalent to that of a supernova. "Now, with all of the data in hand, we have the smoking gun proof that this spectacular event has occurred," said co-author Prof. Guenther Hasinger, also of MPE.

The black hole in the centre of RX J1242-11 is estimated to have a mass about 100 million times that of the Sun. By contrast, the destroyed star probably had a mass about equal to that of the Sun, making it a lopsided battle of gravity. "This is the ultimate ‘David versus Goliath’ battle, but here David loses," said Hasinger.

The astronomers estimated that about one hundredth of the mass of the star was ultimately consumed, or accreted, by the black hole. This small amount is consistent with predictions that the momentum and energy of the accretion process will cause most of the destroyed star's gas to be flung away from the black hole.

The force that disrupted the star in RXJ1242-11 is an extreme example of the tidal force caused by differences in gravity acting on the front and back of an object. The tidal force from the Moon causes tides in the oceans on Earth, and tidal force from Jupiter pulled Comet Shoemaker-Levy apart before it plunged into the giant planet.

The odds that stellar tidal disruption will happen in a typical galaxy are long, about one in ten thousand. If it happened at the centre of the Milky Way, the resulting X-ray source would be about 50 000 times more powerful than the strongest X-ray source in our galaxy. However, such an event would not pose a threat to Earth because of the intervening distance of 25 000 light years.

Other dramatic flares have been seen from galaxies, but this is the first to have been studied with the high spectral resolution of XMM-Newton and the high spatial resolution of Chandra. Both instruments have made a critical advance. Chandra showed that the RXJ1242-11 event occurred in the centre of a galaxy, where the black hole lurks. The XMM-Newton spectrum revealed the fingerprints expected for the surroundings of a black hole, and allowed other possible astronomical explanations to be ruled out.

Evidence already exists for super-massive black holes in many galaxies, but looking for tidal disruptions represents a completely independent way to search for black holes. Observations like these are urgently needed to determine how quickly black holes can grow by swallowing neighbouring stars.

This discovery was announced today at a press conference at NASA Headquarters in Washington DC, USA. A paper describing these results, by Stefanie Komossa and others, will be published in The Astrophysical Journal.

ESA’s XMM-Newton can detect more X-ray sources than any previous satellite and is helping to solve many cosmic mysteries of the violent Universe, from black holes to the formation of galaxies. It was launched on 10 December 1999, using an Ariane-5 rocket, from French Guiana. It is expected to return data for a decade. XMM-Newton's high-tech design uses over 170 wafer-thin cylindrical mirrors spread over three telescopes. Its orbit takes it almost a third of the way to the Moon, so that astronomers can enjoy long, uninterrupted views of celestial objects.