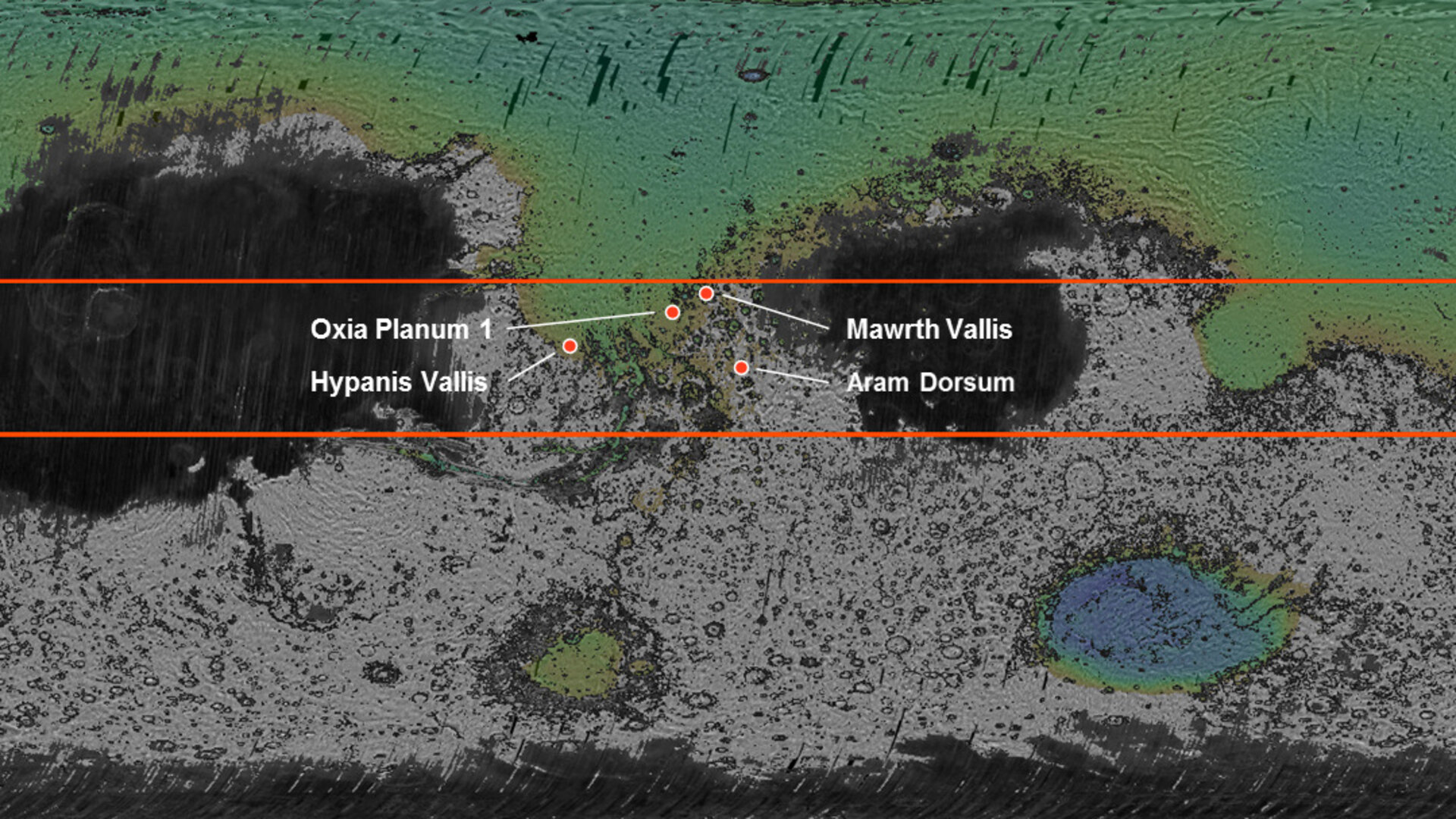 Four possible landing sites are being considered for the ExoMars mission in 2018. Its rover will search for evidence of martian life, past or present.

ExoMars is a joint two-mission endeavour between ESA and Russia’s Roscosmos space agency. The Trace Gas Orbiter and an entry, descent and landing demonstrator module, Schiaparelli, will be launched in January 2016, arriving at Mars nine months later. The Rover and Surface Platform will depart in May 2018, with touchdown on Mars in January 2019.

The search for a suitable landing site for the second mission began in December 2013, when the science community was asked to propose candidates.

The eight proposals were considered during a workshop held by the Landing Site Selection Working Group in April. By the end of the workshop, there were four clear front-runners.

Following additional review by an ESA-appointed panel, the four sites have now been formally recommended for further detailed analysis.

The sites – Mawrth Vallis, Oxia Planum, Hypanis Vallis and Aram Dorsum – are all located relatively close to the equator.

“The present-day surface of Mars is a hostile place for living organisms, but primitive life may have gained a foothold when the climate was warmer and wetter, between 3.5 billion and 4 billion years ago,” says Jorge Vago, ESA’s ExoMars project scientist.

“Therefore, our landing site should be in an area with ancient rocks where liquid water was once abundant. Our initial assessment clearly identified four landing sites that are best suited to the mission’s scientific goals.”

The area around Mawrth Vallis and nearby Oxia Planum contains one of the largest exposures of rocks on Mars that are older than 3.8 billion years and clay-rich, indicating that water once played a role here. Mawrth Vallis lies on the boundary between the highlands and lowlands and is one of the oldest outflow channels on Mars.

The exposed rocks at both Mawrth Vallis and Oxia Planum have varied compositions, indicating a variety of deposition and wetting environments. In addition, the material of interest has been exposed by erosion only within the last few hundred million years, meaning the rocks are still well preserved against damage from the planet’s harsh radiation and oxidation environment.

By contrast, Hypanis Vallis lies on an exhumed fluvial fan, thought to be the remnant of an ancient river delta at the end of a major valley network. Distinct layers of fine-grained sedimentary rocks provide access to material deposited about 3.45 billion years ago.

Finally, the Aram Dorsum site receives its name from the eponymous channel, curving from northeast to west across the location. The sedimentary rocks around the channel are thought to be alluvial sediments deposited much like those around Earth’s River Nile.

This region experienced both sustained water activity followed by burial, providing protection from radiation and oxidation for most of Mars’ geological history, also making this a site with strong potential for finding preserved biosignatures.

“While all four sites are clearly interesting scientifically, they must also allow for the operational and engineering requirements for safe landing and roving on the surface,” adds Jorge.

“Technical constraints are satisfied to different degrees in each of these locations and, although our preliminary evaluation indicates that Oxia Planum has fewer problems compared to the other sites, verification is still on going.”

The next stage of analysis will include simulations to predict the probability of landing success based on the entry profile, atmospheric and terrain properties at each of the candidate sites.

The aim is to complete the certification of at least one site by the second half of 2016, with a final decision on the landing site for the ExoMars 2018 rover to be taken sometime in 2017.

Download the full report: Recommendation for the narrowing of ExoMars 2018 landing sites