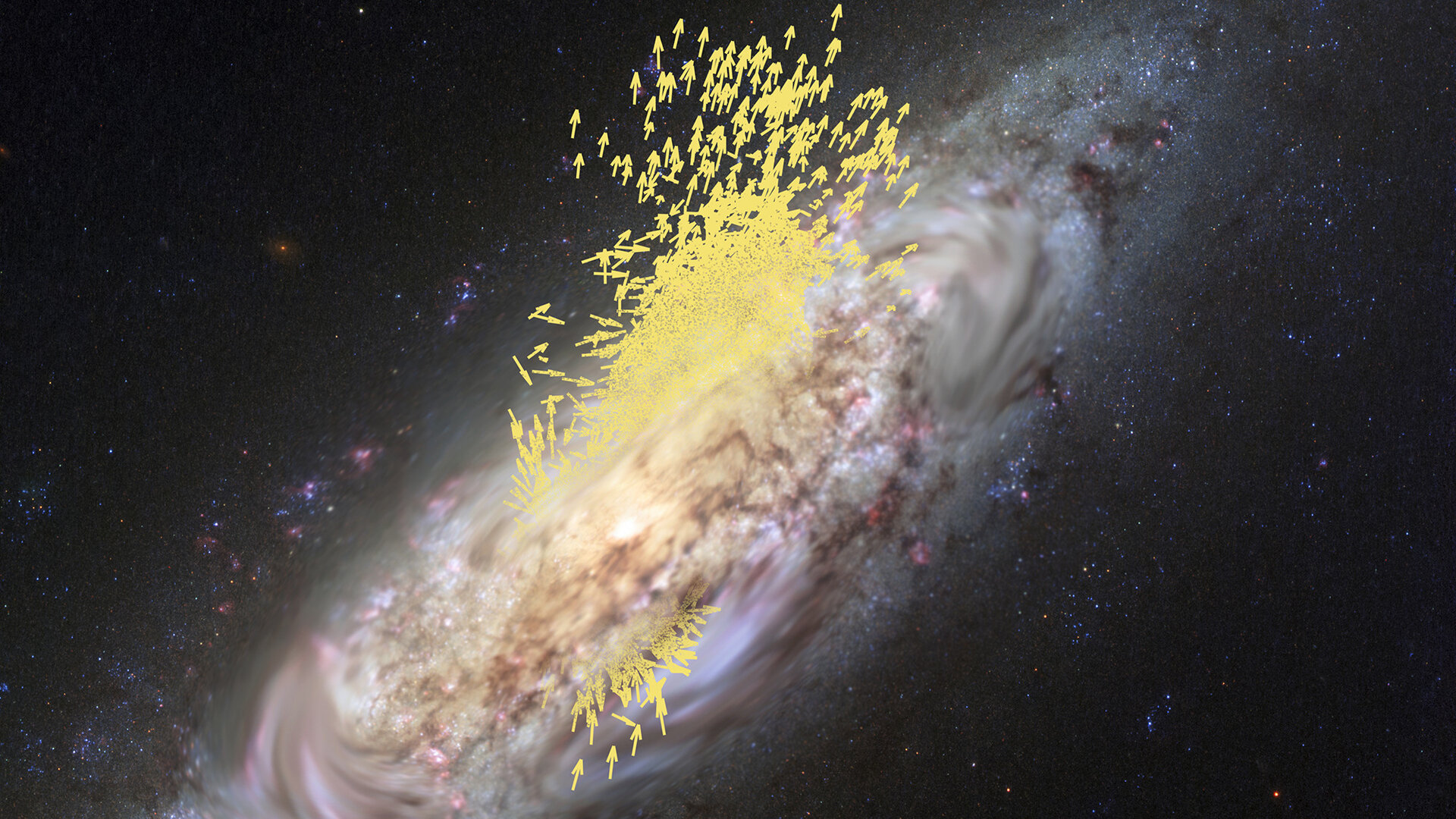 ESA’s Gaia mission has made a major breakthrough in unravelling the formation history of the Milky Way.

Instead of forming alone, our Galaxy merged with another large galaxy early in its life, around 10 billion years ago. The evidence is littered across the sky all around us, but it has taken Gaia and its extraordinary precision to show us what has been hiding in plain sight all along.

Gaia measures the position, movement and brightness of stars to unprecedented levels of accuracy.

Using the first 22 months of observations, a team of astronomers led by Amina Helmi, University of Groningen, The Netherlands, looked at seven million stars – those for which the full 3D positions and velocities are available – and found that some 30,000 of them were part of an ‘odd collection’ moving through the Milky Way. The observed stars in particular are currently passing by our solar neighbourhood.

We are so deeply embedded in this collection that its stars surround us almost completely, and so can be seen across most of the sky.

Even though they are interspersed with other stars, the stars in the collection stood out in the Gaia data because they all move along elongated trajectories in the opposite direction to the majority of the Galaxy’s other hundred billion stars, including the Sun.

They also stood out in the so-called Hertzprung-Russell diagram – which is used to compare the colour and brightness of stars – indicating that they belong to a clearly distinct stellar population.

The sheer number of odd-moving stars involved intrigued Amina and her colleagues, who suspected they might have something to do with the Milky Way’s formation history and set to work to understand their origins.

In the past, Amina and her research group had used computer simulations to study what happens to stars when two large galaxies merge. When she compared those to the Gaia data, the simulated results matched the observations.

“The collection of stars we found with Gaia has all the properties of what you would expect from the debris of a galactic merger,” says Amina, lead author of the paper published today in Nature.

In other words, the collection is what they expected from stars that were once part of another galaxy and have been consumed by the Milky Way. The stars now form most of our Galaxy’s inner halo – a diffuse component of old stars that were born at early times and now surround the main bulk of the Milky Way known as the central bulge and disc.

The Galactic disc itself is composed of two parts. There is the thin disc, which is a few hundred light years deep and contains the pattern of spiral arms made by bright stars. And there is the thick disc, which is a few thousand light years deep. It contains about 10–20 percent of the Galaxy’s stars yet its origins have been difficult to determine.

According to the team’s simulations, as well as supplying the halo stars, the accreted galaxy could also have disturbed the Milky Way’s pre-existing stars to help form the thick disc.

“We became only certain about our interpretation after complementing the Gaia data with additional information about the chemical composition of stars, supplied by the ground-based APOGEE survey,” says Carine Babusiaux, Université Grenoble Alpes, France, and second author of the paper.

Stars that form in different galaxies have unique chemical compositions that match the conditions of the home galaxy. If this star collection was indeed the remains of a galaxy that merged with our own, the stars should show an imprint of this in their composition. And they did.

The astronomers called this galaxy Gaia-Enceladus after one of the Giants in ancient Greek mythology, who was the offspring of Gaia, the Earth, and Uranus, the Sky.

“According to the legend, Enceladus was buried under Mount Etna, in Sicily, and responsible for local earthquakes. Similarly, the stars of Gaia-Enceladus were deeply buried in the Gaia data, and they have shaken the Milky Way, leading to the formation of its thick disc,” explains Amina.

Even though no more evidence was really needed, the team also found hundreds of variable stars and 13 globular clusters in the Milky Way that follow similar trajectories as the stars from Gaia-Enceladus, indicating that they were originally part of that system.

Globular clusters are groups of up to millions of stars, held together by their mutual gravity and orbiting the centre of a galaxy. The fact that so many clusters could be linked to Gaia-Enceladus is another indication that this must have once been a big galaxy in its own right, with its own entourage of globular clusters.

Further analysis revealed that this galaxy was about the size of one of the Magellanic Clouds – two satellite galaxies roughly ten times smaller than the current size of the Milky Way.

Ten billion years ago, however, when the merger with Gaia-Enceladus took place, the Milky Way itself was much smaller, so the ratio between the two was more like four to one. It was therefore clearly a major blow to our Galaxy.

“Seeing that we are now starting to unravel the formation history of the Milky Way is very exciting,” says Anthony Brown, Leiden University, The Netherlands, who is a co-author of the paper and also chair of the Gaia Data Processing and Analysis Consortium Executive.

Since the very first discussions about building Gaia 25 years ago, one of the mission’s key objectives was to examine the various stellar streams in the Milky Way, and reconstruct its early history. That vision is paying off.

“Gaia was built to answer such questions,” says Amina. “We can now say this is the way the Galaxy formed in those early epochs. It’s fantastic. It’s just so beautiful and makes you feel so big and so small at the same time.”

“By reading the motions of stars scattered across the sky, we are now able to rewind the history of the Milky Way and discover a major milestone in its formation, and this is possible thanks to Gaia,” concludes Timo Prusti, Gaia project scientist at ESA. 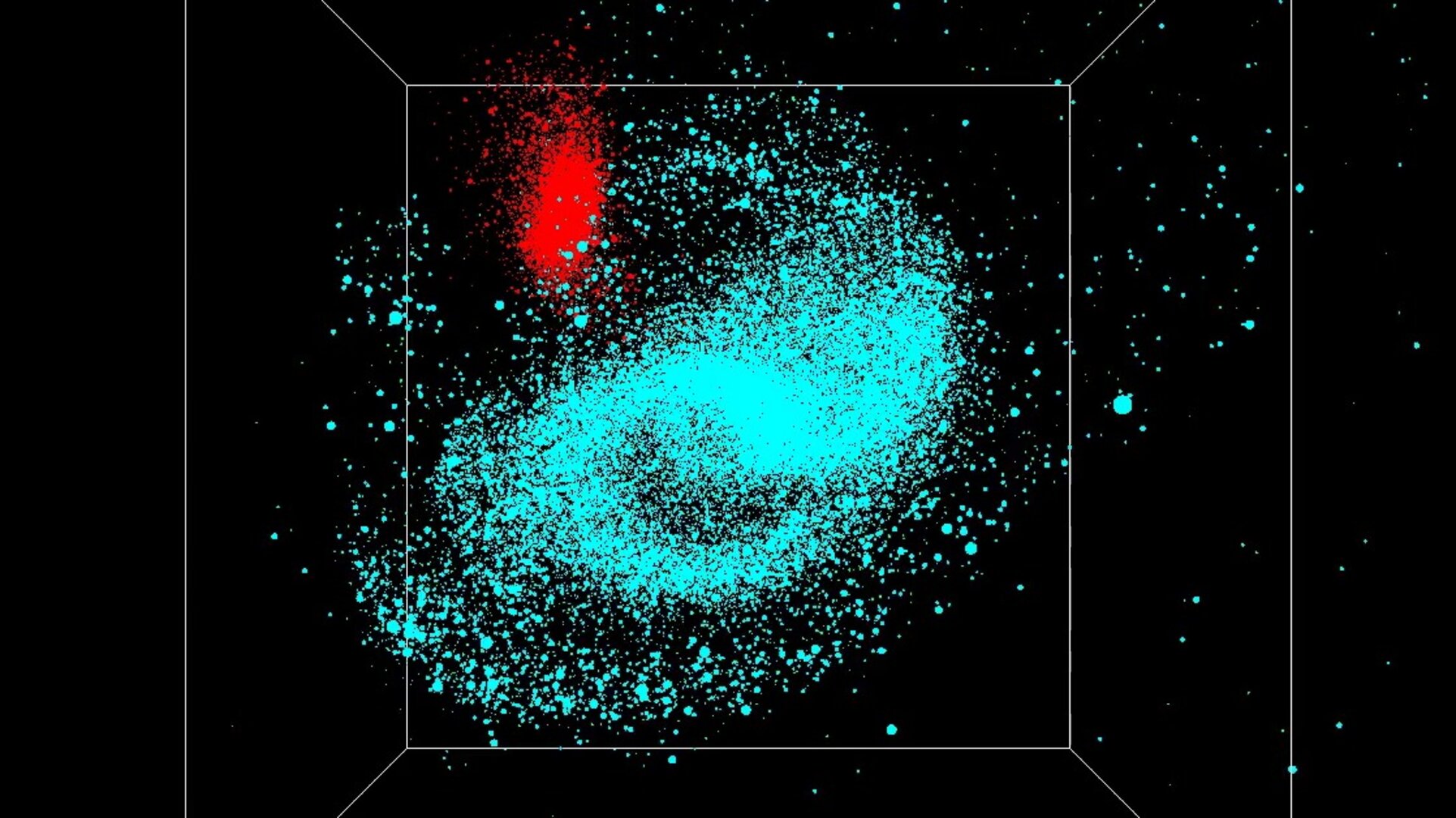 “The merger that led to the formation of the Milky Way's inner stellar halo and thick disk” by A. Helmi et al is published in Nature.