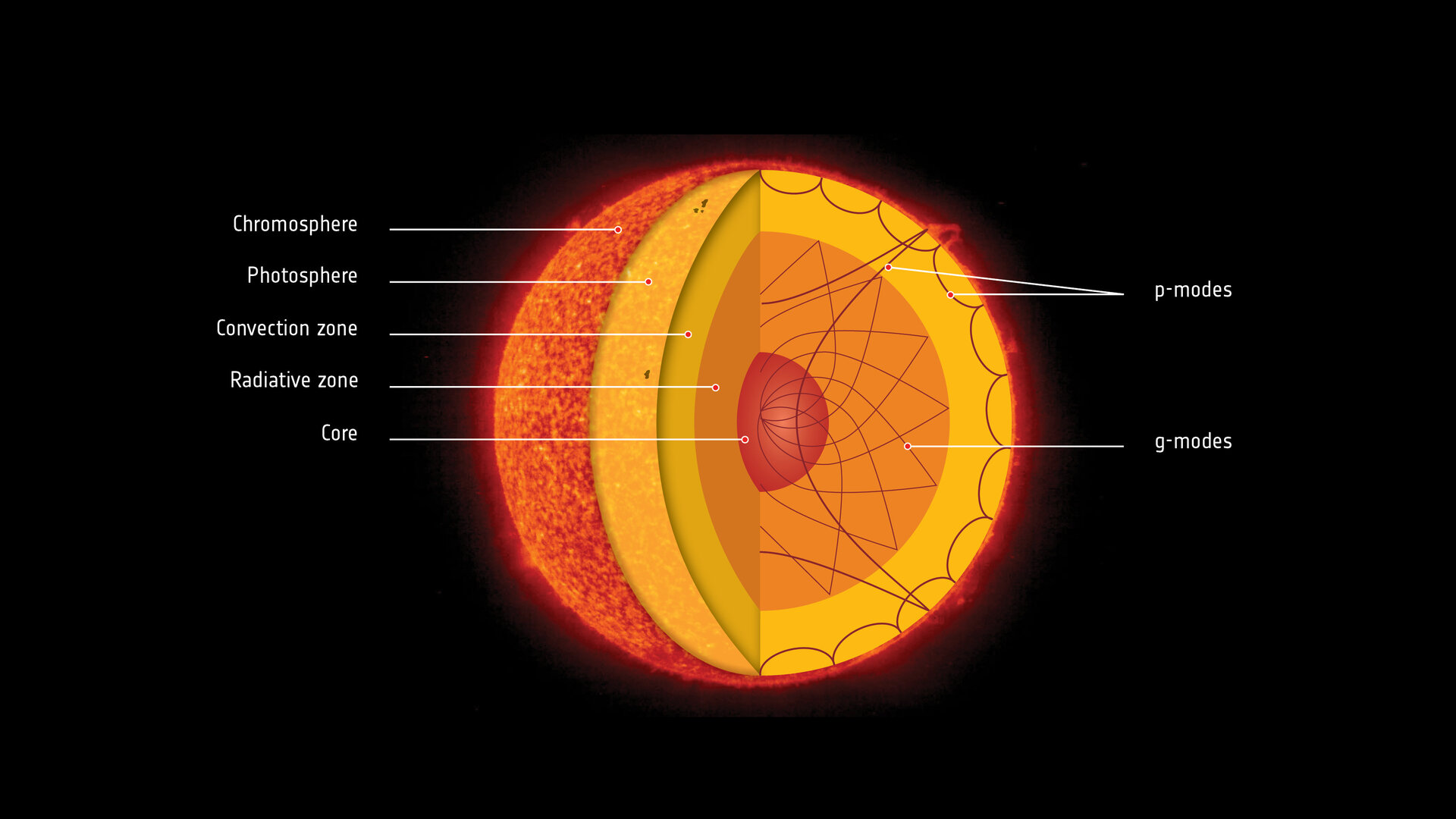 Just as seismology reveals Earth’s interior structure by the way in which waves generated by earthquakes travel through it, solar physicists use ‘helioseismology’ to probe the solar interior by studying sound waves reverberating through it. On Earth, it is usually one event that is responsible for generating the seismic waves at a given time, but the Sun is continuously ‘ringing’ owing to the convective motions inside the giant gaseous body.

Higher frequency waves, known as pressure waves (or p-waves), are easily detected as surface oscillations owing to sound waves rumbling through the upper layers of the Sun. They pass very quickly through deeper layers and are therefore not sensitive to the Sun’s core rotation.

Conversely, lower frequency gravity waves (g-waves) that represent oscillations of the deep solar interior have no clear signature at the surface, and thus present a challenge to detect directly.

“The solar oscillations studied so far are all sound waves, but there should also be gravity waves in the Sun, with up-and-down, as well as horizontal motions like waves in the sea,” says Eric Fossat, lead author of the paper describing the result, published in Astronomy & Astrophysics.

“We’ve been searching for these elusive g-waves in our Sun for over 40 years, and although earlier attempts have hinted at detections, none were definitive. Finally, we have discovered how to unambiguously extract their signature.”

Eric and his colleagues used 16.5 years of data collected by SOHO’s dedicated ‘Global Oscillations at Low Frequencies’ (GOLF) instrument. By applying various analytical and statistical techniques, a regular imprint of the g-modes on the p-modes was revealed.

In particular, they looked at a p-mode parameter that measures how long it takes for an acoustic wave to travel through the Sun and back to the surface again, which is known to be 4 hours 7 minutes. A series of modulations was detected in this p-mode parameter that could be interpreted as being due to the g-waves shaking the structure of the core.

The signature of the imprinted g-waves suggests the core is rotating once every week, nearly four times faster than the observed surface and intermediate layers, which vary from 25 days at the equator to 35 days at the poles.

“G-modes have been detected in other stars, and now thanks to SOHO we have finally found convincing proof of them in our own star,” adds Eric. “It is really special to see into the core of our own Sun to get a first indirect measurement of its rotation speed. But, even though this decades long search is over, a new window of solar physics now begins.”

The rapid rotation has various implications, for example: is there any evidence for a shear zone between the differently rotating layers? What do the periods of the g-waves tell us about the chemical composition of the core? What implication does this have on stellar evolution and the thermonuclear processes in the core?

“Although the result raises many new questions, making an unambiguous detection of gravity waves in the solar core was the key aim of GOLF. It is certainly the biggest result of SOHO in the last decade, and one of SOHO’s all-time top discoveries,” says Bernhard Fleck, ESA’s SOHO project scientist.

ESA’s upcoming solar mission, Solar Orbiter will also ‘look’ into the solar interior but its main focus is to provide detailed insights into the Sun’s polar regions, and solar activity. Meanwhile ESA’s future planet-hunting mission, Plato, will investigate seismic activity in stars in the exoplanet systems it discovers, adding to our knowledge of relevant processes in Sun-like stars.

“Asymptotic g modes: Evidence for a rapid rotation of the solar core”, by E. Fossat et al is published in Astronomy & Astrophysics.