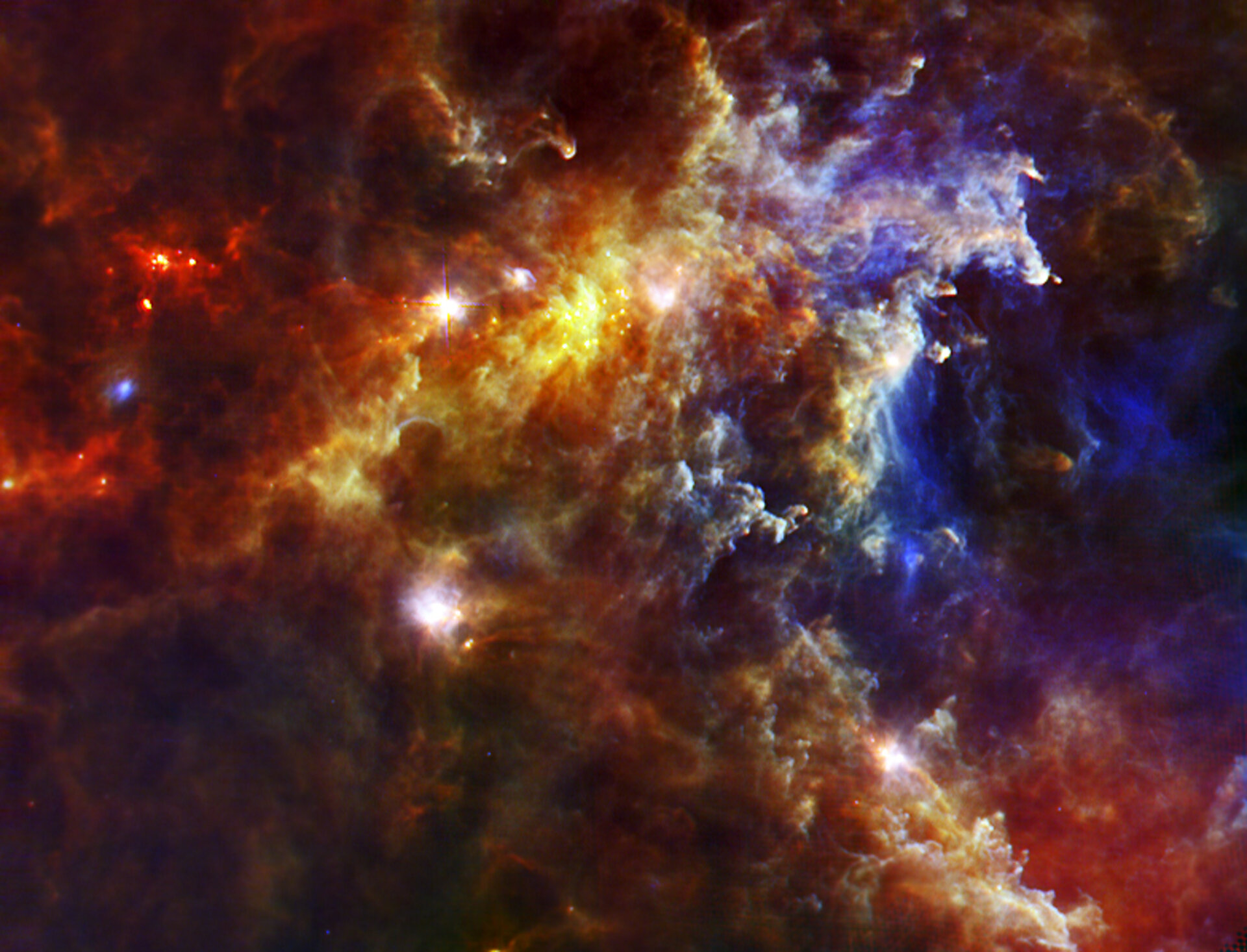 Herschel’s latest image reveals the formation of previously unseen large stars, each one up to ten times the mass of our Sun. These are the stars that will influence where and how the next generation of stars are formed. The image is a new release of ‘OSHI’, ESA’s Online Showcase of Herschel Images.

The Rosette Nebula resides some 5000 light-years from Earth and is associated with a larger cloud that contains enough dust and gas to make the equivalent of 10 000 Sun-like stars. The Herschel image shows half of the nebula and most of the Rosette cloud. The massive stars powering the nebula lie to the right of the image but are invisible at these wavelengths. Each colour represents a different temperature of dust, from –263ºC (only 10ºC above absolute zero) in the red emission to –233ºC in the blue.

The bright smudges are dusty cocoons hiding massive protostars. These will eventually become stars containing around ten times the mass of the Sun. The small spots near the centre and in the redder regions of the image are lower mass protostars, similar in mass to the Sun.

ESA’s Herschel space observatory collects the infrared light given out by dust. This image is a combination of three infrared wavelengths, colour-coded blue, green and red in the image, though in reality the wavelengths are invisible to our eyes. It was created using observations from Herschel’s Photoconductor Array Camera and Spectrometer (PACS) and the Spectral and Photometric Imaging Receiver (SPIRE).

Herschel is showing astronomers such young, massive protostars for the first time, as part of the ‘Herschel imaging survey of OB Young Stellar objects’. Known as HOBYS, the survey targets young OB-class stars, which will become the hottest and brightest stars.

“High-mass star-forming regions are rare and further away than low-mass ones,” says Frédérique Motte, Laboratoire AIM Paris-Saclay, France. So astronomers have had to wait for a space telescope like Herschel to reveal them.

It is important to understand the formation of high-mass stars in our Galaxy because they feed so much light and other forms of energy into their parent cloud they can often trigger the formation of the next generation of stars.

When astronomers look at distant galaxies, the star-forming regions they see are the bright, massive ones. Thus, if they want to compare our Galaxy to distant ones they must first understand high-mass star-formation here.

“Herschel will look at many other high-mass star-forming regions, some of them building stars up to a hundred times the mass of the Sun,” says Dr Motte, who plans to present the first scientific results from HOBYS at ESA’s annual ESLAB symposium to be held in the Netherlands, 4–7 May.