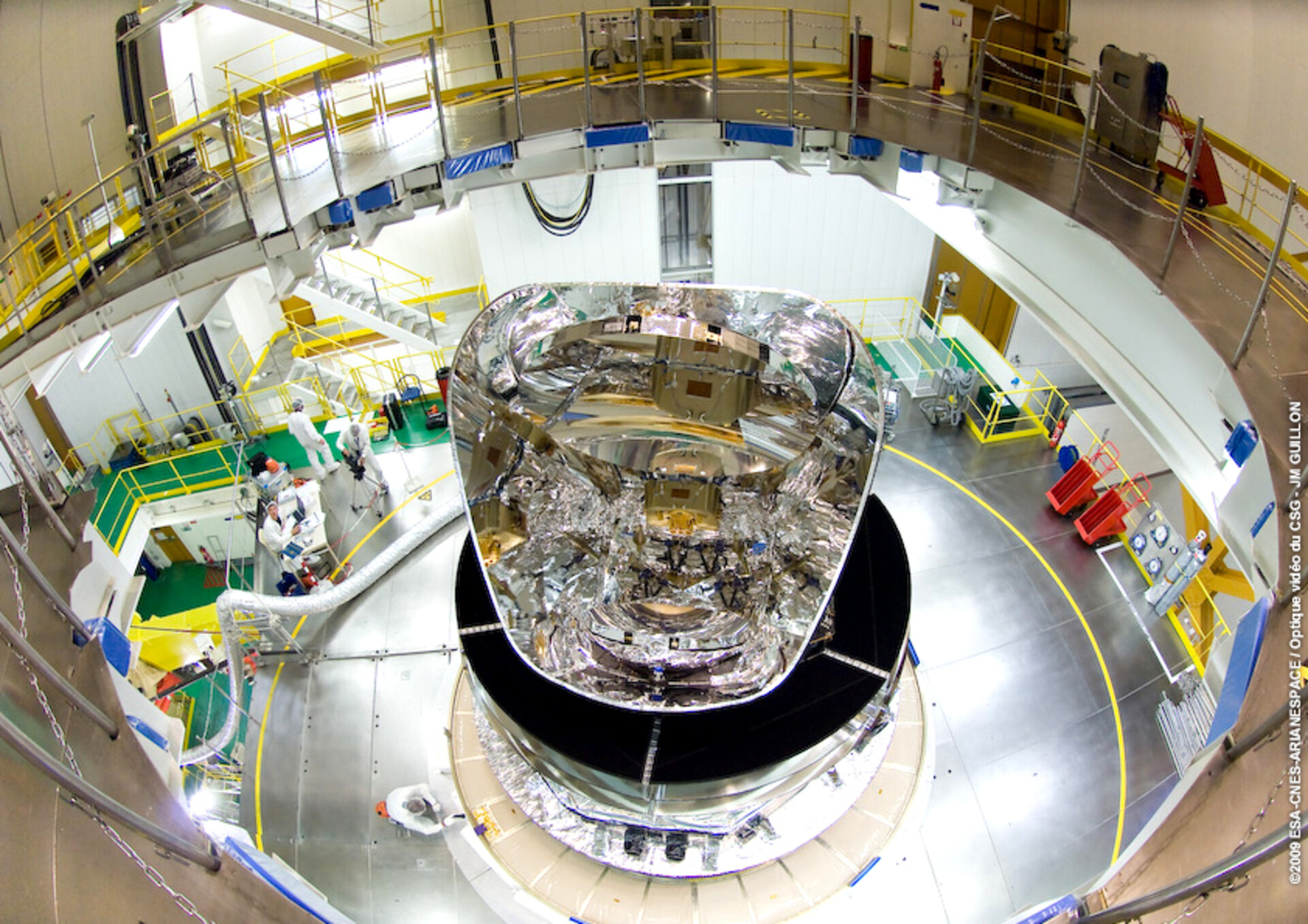 Herschel, ESA’s infrared space observatory, and Planck, ESA’s mission to look back to the dawn of time, are now integrated with the launcher, bringing them a step closer to launch on 14 May from ESA’s Spaceport in Kourou, French Guiana.

Engineers began to fill Herschel’s cryostat with liquid helium at –268°C on 12 April, and by 25 April it was at a cool –271.3°C. Both Herschel and Planck have since moved several kilometres closer to the launch pad: after the integration of Planck with the launcher on 23 April, Herschel checked into its seat on their shared Ariane 5 on 30 April.

Herschel’s detectors must work at extremely low temperatures, close to absolute zero (–273.15°C or 0K), so that they can detect faint light from the furthest reaches of space.

The cryostat houses the instruments detectors and keeps them cool. At launch, it will contain more than 2300 litres of superfluid helium colder than –271.8°C (2.5°K). After launch, the helium will cool further, below 1.65K, in the first few weeks of the mission, making the instruments as sensitive as possible. Further cooling, down to 0.3K, is required for the detectors of the Spectral and Photometric Imaging Receiver and the Photoconductor Array Camera and Spectrometer.

Getting to that stage is a lengthy process that began before the launch campaign was underway.

Helium vacuum flasks were shipped to the launch site in Kourou in advance and decanted into smaller portable flasks. Helium filling started with ‘helium-1’, that is, the helium was liquid and slowly boiling off at ambient pressure at 4.2K. This was used for final preparation and during hydrazine fuelling.

About half the helium evaporated during the process, so the cryostat was continuously topped up, even after the satellite was moved to the launcher, and the vacuum pumping continued until four days before launch. The tank was then 95% to 98% full, and at a temperature of about 1.7K.

Once the fairing is installed, Herschel will be accessible only through small doors in the fairing. Engineers will flush helium gas through the cryostat’s three insulating shields. The shield cooling will stop and the doors will be closed early in the day the launcher is rolled out to the pad. This ensures the cryostat is as cold as possible.

Planck and Herschel check in

With fuelling complete, Planck was moved to the final assembly building on 22 April, 2.6 km from the launch pad. There, Planck was integrated onto the upper stage.

The lower part of the Ariane 5 was assembled and prepared in parallel. On top of the main stage is the upper stage and the vehicle equipment bay (VEB), attached to a 78 cm-high and 3.9 m-diameter adapter cone, composed of a strong carbon structure and two aluminium rings. This cone is the interface between the VEB and Planck.

After checks, engineers installed the ‘Sylda’ unit over Planck on 27 April. Sylda encloses Planck and carries Herschel on its forward end. The Sylda will be jettisoned after the fairing is ejected, the upper stage separates and Herschel is released. Planck will separate after the Sylda is jettisoned.

After its installation on Ariane, the electrical connections for Herschel between the Sylda and the launcher were set up and verified. A nitrogen flushing system was also connected to the Sylda, to provide Planck with a dry atmosphere.

On 29 April, Herschel was brought into the building for integration with the launcher. The satellite was lowered into place and its adapter ring was bolted onto the Sylda on 30 April. The electrical connections between the adapter and the Sylda were installed and verified, followed by a check of Herschel.

Herschel, ESA's cutting-edge space observatory, will carry the largest, most powerful infrared telescope ever flown in space. A pioneering mission to study the origin and evolution of stars and galaxies, it will help understand how the Universe came to be what it is today.

Named after the German Nobel laureate Max Planck (1858-1947), ESA's Planck mission will be the first European space observatory whose main goal is the study of the Cosmic Microwave Background or CMB – the relic radiation from the Big Bang. Observing at microwave wavelengths, Planck is the third, most advanced space mission of its kind. It will measure tiny fluctuations in the CMB with an accuracy set by fundamental astrophysical limits.