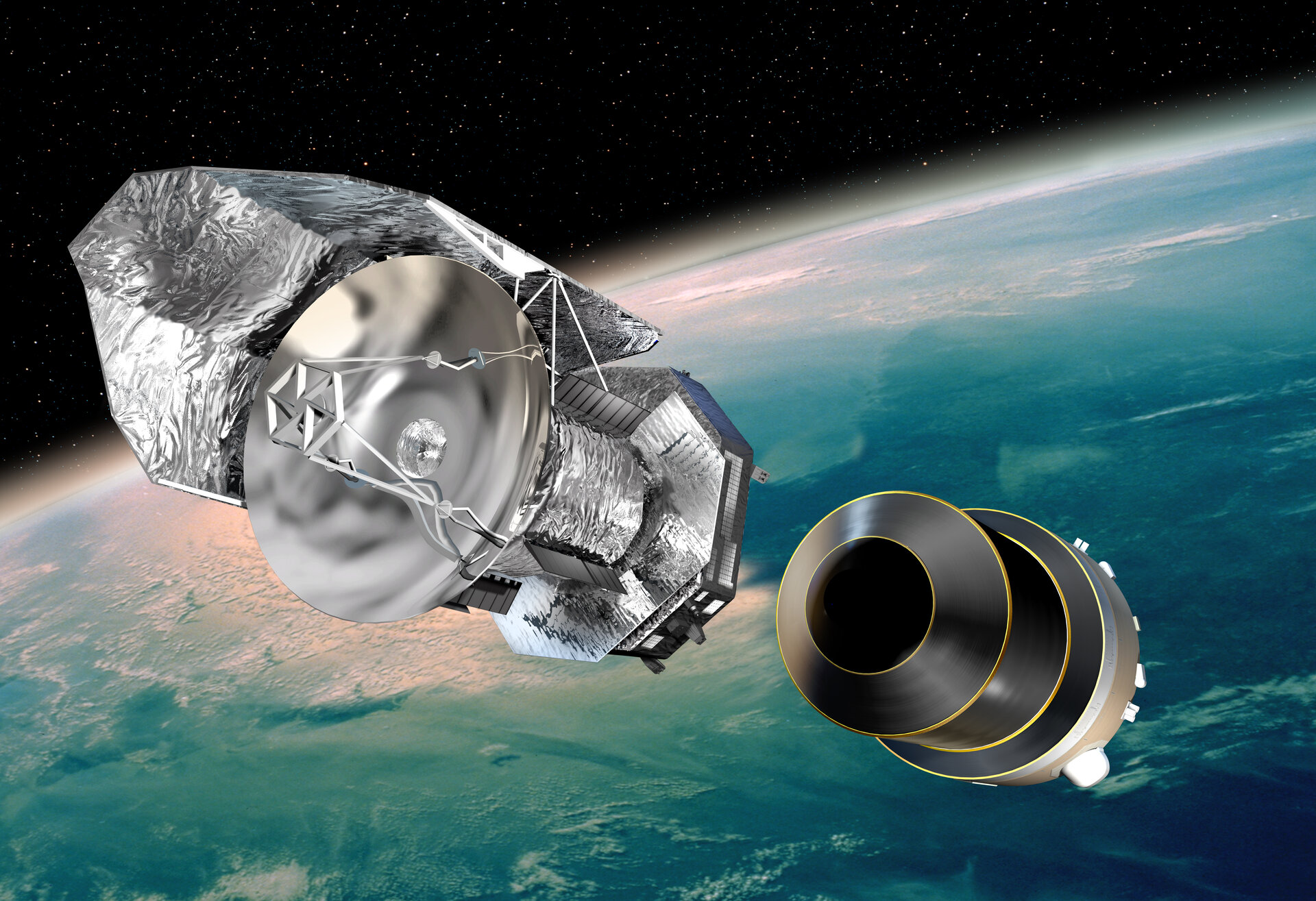 There's a buzz in the Main Control Room as the launch of Herschel and Planck gets closer. The two satellites are scheduled to launch together at 15:12 CEST, 14 May, on an Ariane 5 from ESA's Spaceport in Kourou, French Guiana. Several critical events are planned leading up to and after launch (Web updated 13 May 09:40 CEST).

After launch, Herschel and Planck will be headed to L2, the second Lagrange point of the Sun-Earth system, where they will operate from independent orbits.

L2 is a local gravitational point that is fixed in the Earth-Sun system and is situated on Earth’s night-side. It is an excellent location for both Herschel and Planck: it allows them to shield their sensitive instruments from solar radiation which may otherwise disturb observations and offers good sky visibility. If they were placed in orbit around Earth, heat from our planet, the Moon and the Sun would interfere with the instruments and telescopes, reducing sensitivity.

Both satellites have now been integrated with the launcher; the combination measures approximately 11 m in height and 4.5 m in width, with a weight of about 5.7 tonnes.

The critical milestones before launch include the launch readiness review, held on 9 May, and roll-out to the launch pad on 13 May. The launch also marks the beginning of the Launch and Early Orbit phase (LEOP), during which mission controllers will monitor the satellites 22 hr/day via ESA's ground stations at New Norcia and Perth, Australia; Maspalomas and Cebreros, Spain; and Kourou, French Guiana.

The velocity of the composite that includes both satellites will be about 10 km/s just before the satellites go their own way. Separation of Herschel from the upper stage is scheduled for 15:38 CEST, about 26 minutes into the launch. The 'Sylda' (a support structure for Herschel that also forms a protective cover for Planck) will be jettisoned 1.5 minutes later and Planck will follow at about 15:40 CEST, just under 29 minutes into the launch.

Herschel's final orbit will be a quasi-halo orbit with an average distance of km from L2. The final orbit for Planck will be a Lissajous orbit, with an amplitude of .

The launcher will set the satellites directly on the path to L2. This means that no injection manoeuvre will be necessary for Herschel; the satellite will be close to its halo orbit around L2 right from separation. One major manoeuvre is planned to fine-tune the orbit about 24 hours after launch.

Planck will also be in orbit around L2 at separation, but since the amplitude of its orbit is half that of Herschel, engineers will execute manoeuvres to reduce its orbit to half that of the original. The first manoeuvre is planned about 30 hours after launch.

An expanded version of the timeline covering all critical events around and after launch is below.

Regular coverage leading up to and after launch, covering these critical milestones will be available at the following ESA websites:

Additional information is available via the following: