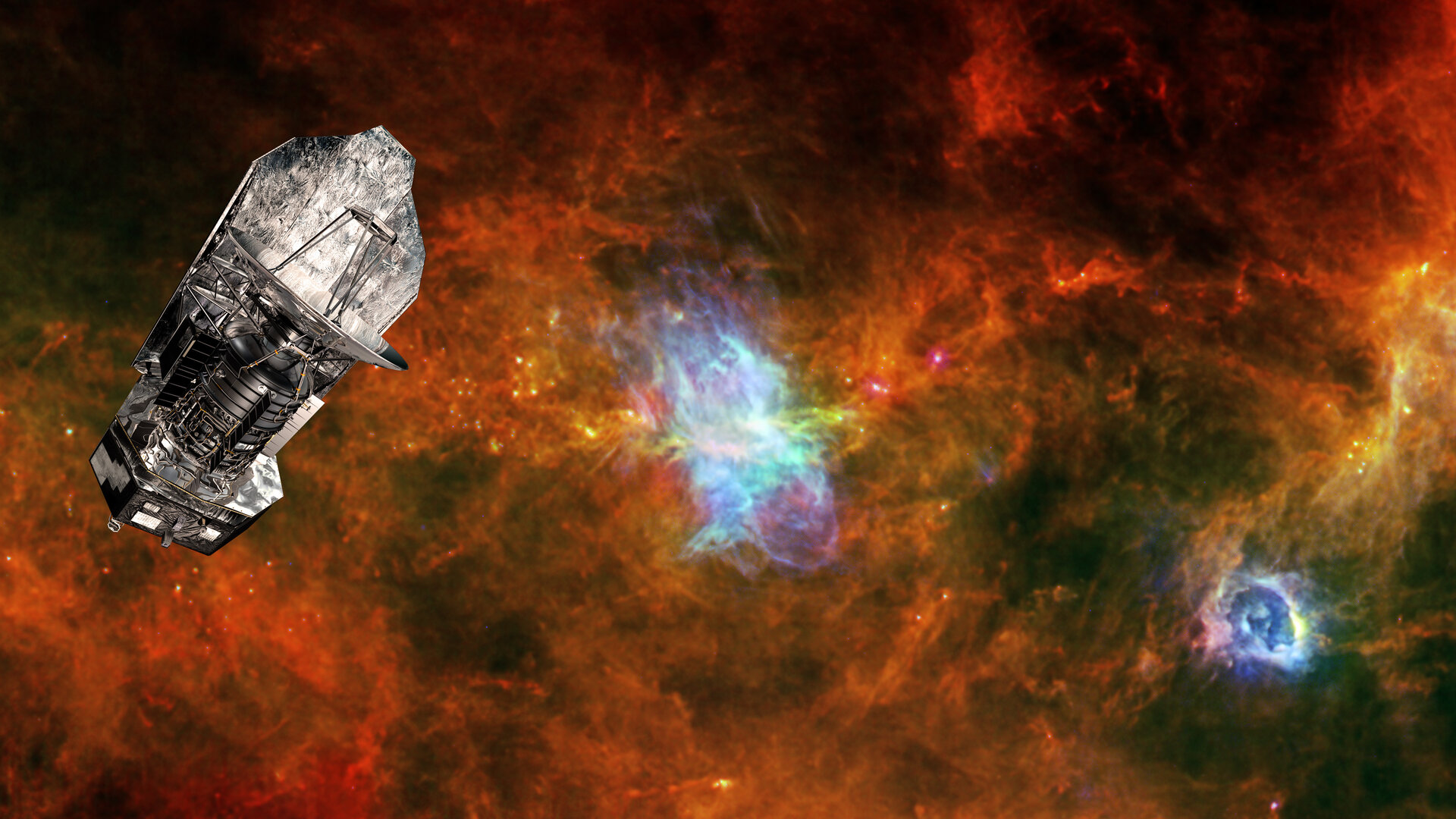 The event was not unexpected: the mission began with over 2300 litres of liquid helium, which has been slowly evaporating since the final top-up the day before Herschel’s launch on 14 May 2009.

The liquid helium was essential to cool the observatory’s instruments to close to absolute zero, allowing Herschel to make highly sensitive observations of the cold Universe until today.

The confirmation that the helium is finally exhausted came this afternoon at the beginning of the spacecraft’s daily communication session with its ground station in Western Australia, with a clear rise in temperatures measured in all of Herschel’s instruments.

“Herschel has exceeded all expectations, providing us with an incredible treasure trove of data that that will keep astronomers busy for many years to come,” says Prof. Alvaro Giménez Cañete, ESA’s Director of Science and Robotic Exploration.

Herschel has made over 35 000 scientific observations, amassing more than 25 000 hours’ worth of science data from about 600 observing programmes. A further 2000 hours of calibration observations also contribute to the rich dataset, which is based at ESA’s European Space Astronomy Centre, near Madrid in Spain.

The archive will become the legacy of the mission. It is expected to provide even more discoveries than have been made during the lifetime of the Herschel mission.

“Herschel’s ground-breaking scientific haul is in no little part down to the excellent work done by European industry, institutions and academia in developing, building and operating the observatory and its instruments,” says Thomas Passvogel, ESA’s Herschel Programme Manager.

“Herschel has offered us a new view of the hitherto hidden Universe, pointing us to a previously unseen process of star birth and galaxy formation, and allowing us to trace water through the Universe from molecular clouds to newborn stars and their planet-forming discs and belts of comets,” says Göran Pilbratt, ESA’s Herschel Project Scientist.

Herschel’s stunning images of intricate networks of dust and gas filaments within our Milky Way Galaxy provide an illustrated history of star formation. These unique far-infrared observations have given astronomers a new insight into how turbulence stirs up gas in the interstellar medium, giving rise to a filamentary, web-like structure within cold molecular clouds.

If conditions are right, gravity then takes over and fragments the filaments into compact cores. Deeply embedded inside these cores are protostars, the seeds of new stars that have gently heated their surrounding dust to just a few degrees above absolute zero, revealing their locations to Herschel’s heat-sensitive eyes.

Over the first few million years in the life of newborn stars, the formation of planets can be followed in the dense discs of gas and dust swirling around them. In particular, Herschel has been following the trail of water, a molecule crucial to life as we know it, from star-formation clouds to stars to planet-forming discs.

Herschel has detected thousands of Earth ocean’s worth of water vapour in these discs, with even greater quantities of ice locked up on the surface of dust grains and in comets.

Closer to home, Herschel has also studied the composition of the water-ice in Comet Hartley-2, finding it to have almost exactly the same isotopic ratios as the water in our oceans.

These findings fuel the debate about how much of Earth’s water was delivered via impacting comets. Combined with the observations of massive comet belts around other stars, astronomers hope to understand whether a similar mechanism could be in play in other planetary systems, too.

Galaxies across the Universe

Herschel has also contributed to our knowledge of star formation on the grandest scales, spanning much of cosmic space and time. By studying star formation in distant galaxies, it has identified many that are forming stars at prodigious rates, even in the early years of the Universe’s 13.8 billion-year life.

These intense star-forming galaxies produce hundreds to thousands of solar masses’ worth of stars each year. By comparison, our own Milky Way Galaxy produces the equivalent of only one Sun-like star per year on average.

How galaxies can support star formation on such massive scales during the first few billions of years of the Universe’s existence poses a crucial problem for scientists studying galaxy formation and evolution.

Herschel observations are hinting that when the Universe was young, galaxies had much more gas to feed from, enabling high rates of star formation even in the absence of the collisions between galaxies normally needed to spark these spectacular bouts of star birth.

“Although this is the end of Herschel observing, it is certainly not the end of the mission – there are plenty more discoveries to come,” says Dr Pilbratt.

“We will now spend the next few years making our data accessible in the form of the best possible maps, spectra and various catalogues to support the work of present and future astronomers. Nevertheless, we’re sad to see the end of this phase: thank you, Herschel!”

ESA’s Herschel space observatory was launched on 14 May 2009 and, with a primary mirror 3.5 m across, is the largest, most powerful infrared telescope ever flown in space.

Herschel will continue communicating with its ground stations for some time now that the helium is exhausted, during which a range of technical tests will be performed.

Finally, in May, it will be propelled into its long-term stable parking orbit around the Sun.

In addition to the legacy of the scientific data, the mission resulted in a number of technology advances applicable to future ESA missions. Herschel saw the development of advanced cryogenic systems, the construction of the largest mirror ever flown in space, and the most sensitive direct detectors for light in the far-infrared to millimetre range.

Manufacturing techniques have already been applied to the next generation of ESA’s space missions, including Gaia and the James Webb Space Telescope.